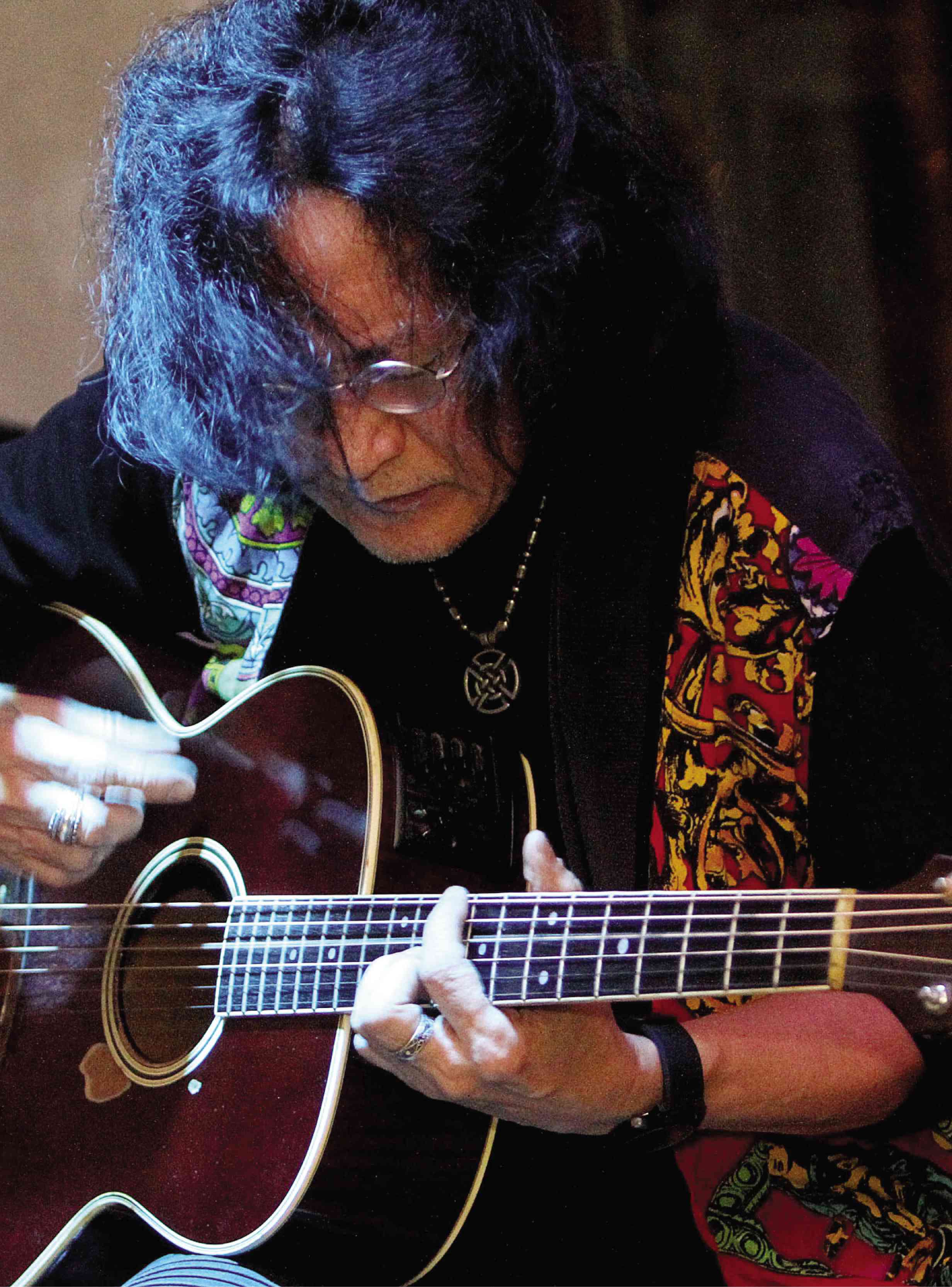 NOLI Aurillo: “It’s the nature of music to be mysterious.”

It is well past 10 p.m. when guitarist Noli Aurillo finally takes the stage.

Percussion ensemble Brujo has been warming up the audience at the [email protected], bohemian Malate’s last holdout amid the onslaught of KTVs, casinos and clubs that has turned Remedios Circle into a tourist trap.

Aurillo lets go of the bottle of Super Dry he has been nursing since he arrived, takes up the well-worn Takamine electric/acoustic he favors these days, and plugs in.

Playing the guitar like a sitar or an oud, he slowly builds a droning, modal improvisation, not unlike the acoustic raga rock excursions Jimmy Page favored in the early days of Led Zeppelin.

In the middle section, Aurillo’s atonal, free-form solo calls to mind the more psychedelic moments in the Byrds’ “Eight Miles High,” while at other times his playing has echoes of flamenco, free jazz, blues and folk rock.

“I don’t know what happened there,” says Aurillo to the audience at the end of the song. “What we do is totally impromptu. Some people ask, ‘can you play that again?’ No. Because we don’t even know what happened. That’s the beauty of it.”

Over the course of two sets, Aurillo both dazzles and mystifies.

“When I run out of ideas, I let my fingers do the walking,” he says. “Just like the yellow pages.”

Indeed, most nights he just seems to pull the music out of the ether, impressing not just with his finger-picked technique, but with out-of-the-box musical ideas that defy easy categorization.

“Eclectic” doesn’t even begin to describe what he does with just an amplified acoustic guitar. He can take off from something as familiar as, say, Madonna’s “Material Girl” and lead the listener into uncharted musical terrain. At other times he can move grown men close to tears with a lyrical interpretation of a stately classical piece, whose title he can’t even remember.

“Heavy” and accessible at the same time, Aurillo’s sets often include crowd-pleasers such as a “Classic Rock Medley” that incorporates “Light My Fire,” “Bohemian Rhapsody,” “Layla” and “Smoke on the Water”; and covers such as the Brazilian ballad “Carinhoso,” his arrangement of Harold Arlen’s perennial “Over The Rainbow,” instrumental arrangements of Beatles songs such as “Strawberry Fields Forever” and “She’s Leaving Home” and even Henry Mancini’s “Peter Gunn Theme.”

Occasionally, he sings. Aurillo’s raspy, booze-inflected voice can best be described as “serviceable.” A request for John Lennon is appeased with “Watching the Wheels”; a birthday celebrator is treated to Dylan’s “Forever Young.”

But it’s his guitar playing that people come to hear. Decades as a working musician have given him the ability to play anything, with anyone. He is equally at home performing solo, accompanying singers such as current on- and off-stage partner Maegan Aguilar, playing with musicians from every genre, even fronting a classical orchestra.

A UP College of Music reject, Aurillo still can’t read music—notes on a page look like ants to him, he says—and he plays and arranges entirely by ear. But he has a grasp of the creative process that few artists are able to articulate.

“What I play is what I am,” he explains.

“I can describe what I do in this manner. There are two cliffs, and you want to cross from one to the other. But there’s no bridge. So what you do is build a bridge, and as you build the bridge, you cross it. I don’t know if the bridge is going to be sturdy, but I have to believe that it will take me across. It’s a leap of faith. If I don’t cross the bridge, I’m going to have to fly, bungee jump without a harness and let the wind take me to where I want to go.”

Born in Tacloban in 1959, the youngest son of a lawyer, Aurillo would feign sickness and play hooky from school just so he could sneak back home and play his older brother’s guitar.

Aurillo was soon obsessed with music. Apart from playing the guitar, he would also arrange pieces for the church choir.

After one semester as a Fine Arts major in UP Diliman, Aurillo dropped out to become a full-time musician.

“I went on the road when I was 17, venturing into the world of music without knowing what’s going to happen to me,” he recalls.

It was the mid-’70s, and there was a full-fledged folk revival. Aurillo soon found himself playing folk houses such as Pension Filipina, the Bodega, Kola House, and the original My Father’s Moustache, for P40 a night.

Even then, Aurillo’s musical instincts were to play out of the box: apart from the usual Peter, Paul and Mary, and Crosby, Stills, Nash & Young covers, he played his own acoustic arrangements of Queen songs, to the puzzlement of many folk purists.

Also knocking around the folk circuit were future members of Asin, which was how Aurillo ended up playing on eight Asin albums (he won an Awit Award for best arrangement for a medley on the 2002 Asin reunion album.)

When the folk trend started to fade, Aurillo headed to Olongapo where he played guitar with a band called Dos Por Dos.

Despite modest success, Aurillo even then found the band format confining. He soon became the guitarist-about-town in Olongapo, jamming with musicians from such bands as the Split Ends and the Frictions.

By the late 1980s, however, he soon found himself back in Manila, in a tiny dive along España called Mayric’s, playing with a reggae band called Cocojam.

Although they leaned heavily on Bob Marley covers, Cocojam was a classic groove band, whose sets at Mayric’s usually ended with patrons dancing on the tables.

They were also a legendary party band—onstage and off. The members lived together in a small apartment on Quiricada, then a notorious drug alley, which soon turned into a 24-hour party place.

“If you’re in a band, it matters to me that you’re not just playing onstage, you’re also playing offstage,” says Aurillo. “If I recall correctly, there are only five needs: music, laughter, drugs, booze, and food. That’s it. Then you’re enjoying the life of a real, true, cold-blooded musician. I say ‘cold-blooded’ because you have to show no mercy, kailangan i-todo mo, kung alanganin ka, huwag na lang.”

For Cocojam, however, the way of excess led not to the palace of wisdom but even more excess. Substance abuse, inter-band romantic entanglements, and the pressures of living together eventually caused the band to fall apart.

Even though he admits that, for a time, he was under the sway of “the most evil drug,” Aurillo never stopped working. Even while he was in Cocojam he was also playing sessions. For a time he even played in a hotel lounge band.

“I’m not saying that playing commercial songs for the sake of survival is bad—everyone has to survive,” he points out. “But I found myself asking: Is this it?”

In the early ’90s, he took off for a couple of years, eventually landing in Bangkok where he soon found a paying gig playing in a tony French restaurant. Time away from Manila helped him wean himself off the hard stuff. He quit smoking, and for a time even quit drinking after he developed sleep apnea.

“Now I only drink when I play,” he says. “I’m from Tacloban, and we [Warays] have a reputation for being tarantado. But I’m a lot mellower now.”

When he returned to Manila, Aurillo was relatively clean, and ready to plow his own furrow in the emerging local music scene where his musical chops and years on the road made him something of a legend: the last guitar slinger.

“The band format is limiting,” he says. “It’s not a bad kind of limit. But I also want to stretch, to broaden my musical horizons. I don’t like saying this because it sounds like false modesty, but there’s a lot more in the guitar that I have to learn. Like Michelangelo said, ‘I’m still learning.’”

By temperament, Aurillo is suited to life as a free agent, a guitar for hire, playing weddings, parties, anything—as long as he can play it his way.

“That’s why I’ve never had a manager, or a producer or a record company,” he says. “It’s a trap. They will do something eventually what will destroy your soul.”

For the last few years, he has been independently producing his own recordings, focusing on original compositions and instrumental arrangements of popular songs.

Last year he released “In Pursuit of Excellence,” an album of cover songs given the Noli Aurillo treatment. He is currently recording a follow-up album.

But while listening to Aurillo on disc is fine, his music really comes alive in performance, on stage, where the audience can join in his high-wire act.

“It’s the nature of music to be mysterious,” he says. “There’s that thrill of the unknown. You don’t know where you’re going—you just go. Jump without a harness and let the wind take you, because the wind is the music and you are the instrument.”