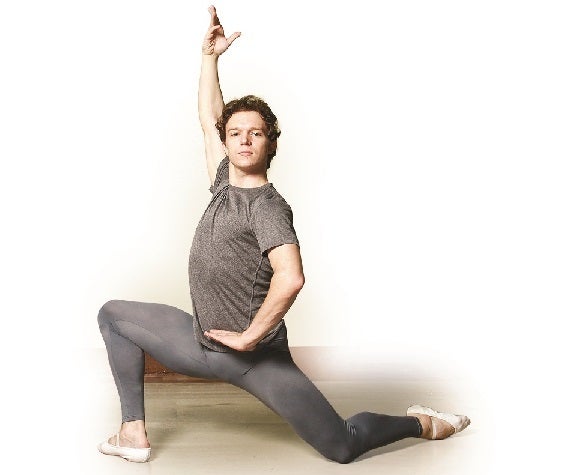 Since he arrived in Manila, international guest artist Joseph Phillips, 29, has become everybody’s crush in the dance world.

Matrons and ingénues can’t help but swoon over the danseur, who bears a slight resemblance to Hollywood actor Ryan Philippe.

Even the local danseurs have a man crush on Phillips for his powerful but suave leaps and seamless multiple pirouettes that end in a controlled slow motion.

Phillips will be the main attraction in “Don Quixote,” which opens the season of Philippine Ballet Theater (PBT) at the Cultural Center of the Philippines this weekend.

Based in Russia, the heartland of ballet, he is one of the few Americans to make it in the major companies that have remained exclusive to Russians. Phillips is a principal dancer of the Primorsky Opera and Ballet Theater in Vladivostok, Russia’s port city. Primorsky is a satellite of the legendary Maryinsky (formerly Kirov) Ballet, the company that honed such icons as Mikhail Baryshnikov, Natalia Makarova and Rudolf Nureyev.

Phillips received solid education in one of America’s finest schools, the University of North Carolina School of the Arts. He was trained in the eloquent Russian technique by Stanislav Issaev, a former principal dancer of Moscow State Ballet Theatre (the same company where PBT’s ballet master Anatoli Panasiukov came from.)

Issaev has been awarded for his coaching skills, having groomed many award-winning dancers. Under Issaev’s tutelage, Phillips became arguably the most bemedalled danseur in America.

The brilliant technique and artistry were born out of sheer discipline and determination. From the ages of 12 to 16, Phillips immersed himself in the studio, perfecting his craft and girding for international competitions. The teacher and ward would do a video analysis of the latter’s rehearsal to discover unnoticeable flaws, correct mistakes and build strength and artistry.   Today, Phillips records his rehearsals on his Android phone and replays them on the big screen at night to prepare him for the next session.

Phillips would also learn from the videos of Baryshnikov and Nureyev.

“When you’re young, you try to imitate great dancers, especially in parts they do well. If you’re smart, your style evolves as you create your own version. Baryshnikov had amazing flair in movement and style. He never did too much nor too little. His acting was second nature. Nureyev was completely his own. He was very different, that was what made him famous,” he says.

Phillips pursued a professional career at age 17. He joined the San Francisco Ballet, Miami Ballet and eventually, the American Ballet Theater where he became a soloist, playing secondary roles. He got his break by playing Ali, the lead in “Le Corsaire.”

Between seasons, Phillips performed as an independent guest artist performing all over America and around the world. During a Russian tour, he was paired with ballerina Irina Sapozhnikova. In the course of 23 shows in several cities, they fell in love.

Meanwhile, the former artistic director of the Promorsky State Ballet was so impressed with Phillips’ flawless technique and purposeful dancing that he invited the American danseur to join the company.

In Russia, where the performing arts are steeped in the culture and lifestyle of the people, artists are given respect. “When you say you’re a ballet dancer in America, people will ask, what do you do for a real job? The people on the street of Russia know their ballet because they see it all the time,” he says.

Compared to America, where the work is seasonal and the opportunities for artistic growth are limited, Phillips performs every week and has been cast in many principal roles.

He has performed Basilio, the principal role in “Don Quixote,” for some productions. “Don Quixote” is a love story between Basilio the barber and Kitri, who both try to outwit Kitri’s betrothed, an aging nobleman, Gamache. The story becomes more complicated when Don Quixote sees Kitri in the town square and mistakes her for Dulcinea, the woman of his dreams.

On his interpretation of Basilio, Phillips explains, “He is a simple guy and a playboy at first until he falls in love with Kitri. It’s a simple story with Spanish dancing, crazy jumping and turning.”

In contrast to the virtuosity of Basilio, Phillips enjoys the lyric and introspective role of Prince Siefried in “Swan Lake.”

While Basilio’s role is a combination of comedy and bravura dancing, Prince Siefried’s role has more mime and partnering and a few solos.

“Basilio is brash. It’s easy to play a character with a strong personality. In ‘Swan Lake,’ there are moments where you walk onstage and it may look like nothing. You have to make something out of those ‘nothing’ moments, by running an inner dialogue in your head,” he said.

The role of the Prince is also significant to Phillips since it is traditionally given to taller men.

“It’s not a part that small guys do,” says Phillips, who is 5’8.” It helped that his partner Sapozhnikova, was the perfect size for him, thereby helping both of them land good roles.

“I don’t consider myself short, but there are a lot of tall girls out there,” he said. “With my partner (Sapozhnikova), it was not hard to cast me because I had someone to dance with.”

Because of their closeness, Phillips can be very forthright about their performance. “When you dance with someone who is family to you, you can say things that you wouldn’t say to someone else. You could deepen the role and fine-tune things. In the past, I never had the freedom to express these things. If I did, someone would take it the wrong way. My girlfriend and I know how to connect. When we go home, we watch the video of our rehearsals,” he says.

That quest for perfection is reflected in his work ethic with the PBT. Regina Magbitang, who will essay the role of Kitri, points out that Phillips is very exacting with the music and in their partnering. He also emphasizes the importance of rapport and eye contact with each other.

Magbitang, 23, began her training at the Halili-Cruz School of Ballet and has won third place in the National Music Competitions for Young Artists Foundation (Namcya) dance competition and second place in the recent CCP National Ballet Competition. She has performed lead roles in “Le Corsaire,” “Nutcracker” and “Tzigane.”

The alternate Kitri, Lobreza Pimentel, 23, studied under Quezon City Performing Arts Development Foundation Inc. (QCPADFI) and former PBT principal Maritoni Tordesillas. She won first place in the NAMCYA competition in 2012 and has performed the leads in “Mirinisa” in the local version of “La Fille Mal Gardee.”

Phillips has been overwhelmed by the hospitality of the Filipinos. The company and board members have taken him to malls, Intramuros and restaurants where he enjoyed puto and pork belly.

He is also delighted with the expressive dancing quality of the Filipinos and the strength of his two partners. “These dancers are passionate about their art,” he says.