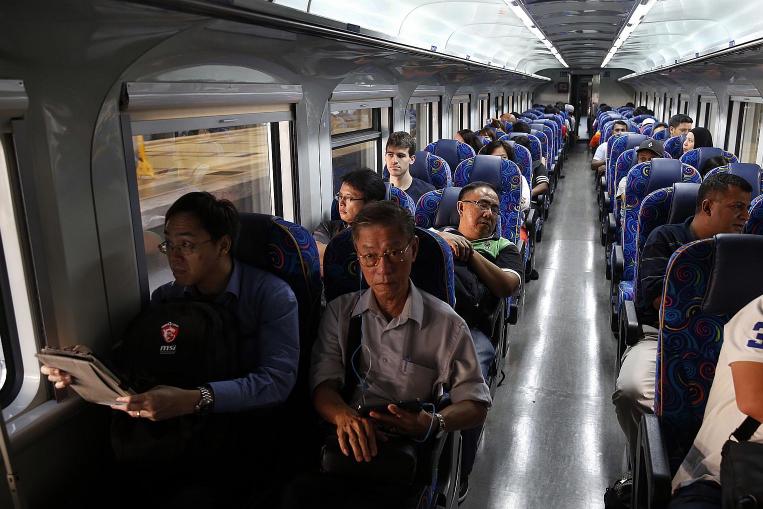 The train service will provide a solution for those who travel daily from Johor to Singapore, operator KTM said. ST PHOTO: LAU FOOK KONG

The service was popular with Malaysians, who took advantage of the quicker border crossing to get to work and school here.

Tickets for the first two train services leaving JB Sentral on Wednesday morning – at 5:30 a.m. and 7 a.m. – were sold out. There are a total of seven trips from Johor and another seven from Woodlands every day. Each trip can carry about 320 passengers.

Secondary 4 student Hew Sin Hui, a Malaysian who studies here, was one of those who took the 5:30 a.m. shuttle.

“Usually I would take the bus, and sometimes there’s a (traffic) jam (on the Causeway). There’s no guarantee I get to school on time,” said the 16-year-old.

Commuters said the shuttle – which costs RM5 (S$1.79) from JB and S$5 from Woodlands – was more efficient than taking the bus, which could take between 45 minutes to over two hours if there was a jam.

Shuttle trains leaving from Singapore last Tuesday morning, however, were relatively empty. On the 6:30 a.m. train which The Straits Times took from Woodlands, there were less than 10 passengers onboard.

One of them, freelance photographer Bobby Teh, 68, said: “The train timings are not so good. They only run during the morning and evening peak hours.”

Retiree Lee Chee Hua, 64, however, said that taking the train was hassle-free because he could clear both the Singapore and Malaysia immigration counters at Woodlands itself. “There’s also no fear of a traffic jam,” he said.

With the new shuttle service, trains to and from KL Sentral, Butterworth and Gemas – which previously terminated at Woodlands station – will now end at JB Sentral.

Commuters will have to use the Shuttle Tebrau to travel between JB and Singapore.

A 62-year-old Malaysian, who wanted to be known only as Mr Lee, said he took the train from KL at 11 p.m. on Tuesday and was scheduled to arrive at JB Sentral at 6:45 a.m. on Wednesday. This would allow him to take the 7 a.m. train to Singapore.

But due to a delay, he only arrived at 7:10 a.m., and he had to wait almost 1 1/2 hours to catch the 8:30 a.m. service. “KTM must look into the timings, and allow for more time to pick up the passengers on the overnight train,” he added.

Singapore-KL high-speed rail: A game-changer but how much will tickets cost?