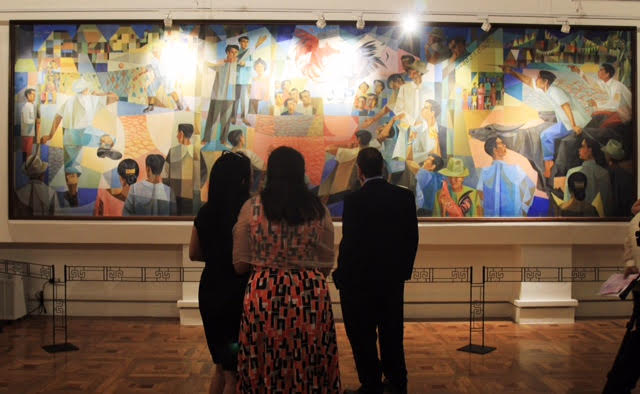 TWO LARGE-SCALE Vicente Manansala paintings that have delighted employees of the International Rice Research Institute (Irri) are now shared with a wider audience at the National Museum as they land on the list of our National Cultural Treasures.

Manansala was commissioned to do the paintings in 1962. They were put on display on the walls of the dining hall and cafeteria of the Irri headquarters in Los Baños, Laguna.

Through a partnership between Irri and the National Museum, and to protect and preserve the masterpieces, the paintings were transferred to the Irri Hall in the historic Legislative Building which houses the art exhibition galleries of the National Museum. The Irri Hall opened for public viewing last May 14.

On the same day, the two artworks were elevated by the museum from being Important Cultural Properties to the status of National Cultural Treasures. This is the highest recognition in the Philippines for works of art that play a significant role in defining the identity of the Filipino people.

An official heritage marker announcing the recognition has been installed by the National Museum.

As stated in Section 7 of the National Cultural Heritage Act of 2009, the two paintings will receive priority government funding for its protection, conservation and restoration; incentives will be provided for private support of its conservation and restoration through the National Commission for Culture and the Arts’ Conservation Incentive Program; and will be given priority protection by the government in case of armed conflict, natural disasters, and other events that may put them in danger.

Robert Zeigler, director general of Irri, agreed to lend the two paintings to the National Museum for five years with the hope of introducing them to a broader audience.

“Rice is culturally intertwined with the lives of the Filipinos, and Vicente Manansala captured it perfectly in these national treasures.”

The twin Manansala murals are a lighthearted narration of Filipino rural life. One is a joyful, pastel-colored medley of labor; scenes of fishing and rice-planting flank the two sides, while at the center, as focal point, is a woman bathing a child.

The second painting is a spectacle of small-town festivities: on the left is a game of sipa, the national sport; on the right are two men competing in a carabao race. The stretch of canvas is lined with a crowd of people watching two roosters in midair cockfight .

The figures are rendered in trademark Manansala—with overlapping transparent polygonal cells that play up the two-dimensionality of the painting.

Manansala, born in 1910, took up Fine Arts at University of the Philippines. He worked for several publications in the 1930s.

He was awarded study grants abroad. He taught at University of Santo Tomas School of Fine Arts from 1951 to 1958.

He was proclaimed National Artist in 1982, a year after he passed away.

Manansala produced a significant number of murals, several of which are declared Important Cultural Properties. The Irri series is the first to be declared National Cultural Treasure.