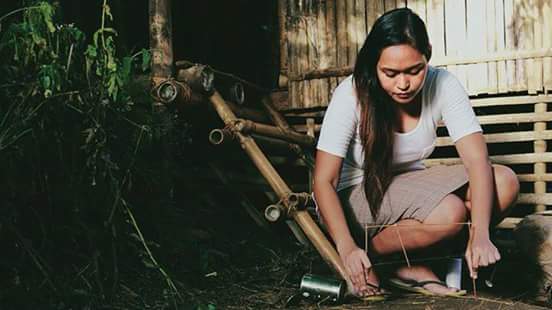 MERCEDES Cabral wons Best Actress at the World Premieres Film Festival for her role in the film. FACEBOOK.COM/ANKUBOSAKAWAYANAN

Yapan’s ode to ecology: A woman’s love story with a ‘kubo’

ALVIN Yapan’s “An Kubo sa Kawayanan,” a film in Bicolano with English subtitles, brings an invigorating breath of fresh air to Philippine cinema.

Michelle (Mercedes Cabral), the main character, devotes full attention to the simple realities around her—a stream, stones used in the game of pikô, a can of Ligo sardines, a nipa hut, a bamboo grove, an ant, a chicken, a beetle.

This attention to what is there may account for her unwavering conviction to dwell in her “kubo sa kawayanan.”

She firmly believes that if she protects the things around her, they, in turn, will protect her. Clearly Michelle is deeply attached to and in love with her kubo.

She will not leave her environment for the riches of the world. She feels “at home” in it. She is happy, earning a decent living as a calado embroiderer. Her kubo makes its presence felt to her, for only she can hear it creaking.

Yapan is artful enough to make us suspend disbelief that Michelle’s kubo behaves like a naughty suitor who hides her pair of slippers and pair of scissors, as if to prevent her from going away.

Michelle’s perceived “stubbornness” puzzles and frustrates her boyfriend Gary (Mark Felix), who is continually persuading her to go with him to Qatar.

A female teacher client, who’s migrating to Canada, also cannot understand why Michelle is unable to part from her humble kubo.

Larry (RK Bagatsing), a young filmmaker who arrives to make a documentary on Michelle’s craft, also expresses dismay that she must be out of her mind not to desire the big city.

The three people feel constricted and bored in a provincial setting, where, according to them, nothing is happening.

Yapan does not want his film to be immediately interpreted symbolically and reduced to his earlier films that show a mystical strain.

Rightly so, for the film is not a romantic invitation to go back to the pastoral past.

In Michelle’s world, there is room for a radio and a cell phone. She is not a naïve promdi. She is aware of the risks and danger of living alone in her kubo. She combines an unusual sense of independence with a faith in St. Anthony of Padua.

She is smart enough to insist to be paid fairly for her work in the scene where the teacher-client shamelessly bargains with her minimal fee.

Yapan’s film succeeds in making us stop, look, listen and reflect on the dignity of objects around us. It is that rare local film today that allows us to go deep into our kalooban, to revel in the silence inside us that enables things to be, that lets things be. Only then will things begin to “speak” to us.

It is an ode to nature, to beauty, not necessarily to “the true, the good and the beautiful” that Imelda Marcos wanted to impose on Lino Brocka’s films.

“An Kubo sa Kawayanan,” as a post-Brocka kind of film, in fact breaks new ground. Yet paradoxically it confronts us with the important questions in a time of migration: Why leave? Why not stay? To our brothers and sisters in the diaspora, the question is: Why not come back now?

Yapan has gifted us not only with a film on ecology but also on cultural politics. He has allowed his productive imagination full play in this poetico-political film. If you, dear reader, allow yourself to experience it, you will be moved. Who knows? You may even follow the poet Rilke’s dictum: “You must change your life!”