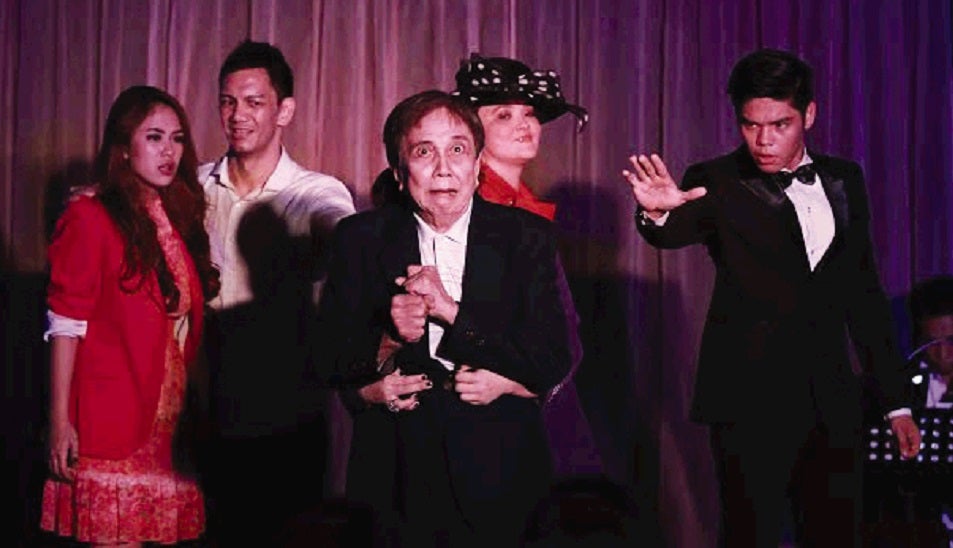 SCENE from "Mad about Mozart"

Mozartian madness, Gilbert & Sullivan Filipinized, and a tribute to BenCab

THE “PRESTIGE play” of Repertory Philippines this year is Amy Herzog’s “4,000 Miles” (Onstage, Greenbelt I, Makati City, directed by Bart Guingona), with Baby Barredo once again, after “August: Osage Country,” giving a masterful performance as an elderly woman at odds with her grandson, played by Jef Flores. The two are brought together by an unseen, suicidal next-door neighbor.

The Rep followed this up with an old-fashioned, madcap, over-the-top comedy directed by Miguel Faustmann, Ray Cooney’s “Run for Your Wife,” about a London taxi driver (played by Jamie Wilson) with two wives who live near each other. The play is at times screamingly funny but sometimes hard to digest—literally, for in one sequence Wilson (rather mature for the role) is made to chew a newspaper to bits!

“Sabel: Love & Passion” (The Theatre at Solaire) was an engaging, delightful and at times poignant (as in tearjerker) dance-musical, with sprightly choreography by the Philippine Ballet Theater, music by Louie Ocampo, and book-lyrics by director Freddie Santos.

The work was inspired by the “Sabel” series of National Artist Benedicto Cabrera (BenCab), darling of Manila’s art collectors. It was part of a year-long tribute, at Solaire, to the visual artist, who first held his first solo show in Ermita, Manila, 50 years ago.

“Sabel: Love & Passion” was a bio of Bencab’s muse Sabel (with Iza Calzado in the leading role) and her vicissitudes, wihich included a descent into madness. The jagged lines of the production design held one’s attention, as they included pre- and postwar nostalgic footage.

“Mad about Mozart,” a multimedia concert by the Philippine Opera Company (POC), headed by soprano Karla Gutierrez, with musical direction by Jon Meer Vera Perez and stage direction by Floy Quintos, drew an unexpectedly large crowd at the POC Opera Haus in Bautista Street, Makati City. The theme could have contributed to its success: “Sex, Seduction, Death & Transcendence.”

There were excerpts from Mozart’s “Don Giovanni,” Così fan tutte,” “The Magic Flute” and “Requiem Mass.” The visuals showed scenes from the Apocalypse, devastation and eviction, making the show relevant.

“Everybody had to shine vocally in keeping with Mozart’s aesthetic,” said Vera Perez. There are plans to restage the show concert at a bigger venue in the near future.

Gilbert & Sullivan’s one-act comic operetta “Trial by Jury,” first staged in London in 1875, was transplanted to Manila during the 1930s in a delectable adaptation at the RCBC Plaza’s Romulo Auditorium in Makati City. There were period Filipiniana costumes and, adding to the fund, regional accents, deliberate grammatical lapses and asides in Tagalog,Visayan and Pampango.

It was a treat seeing soprano Camille Lopez-Molina and baritone Noel Azcona outrageously overacting, with triple threat Nazer Salcedo holding forth with aplomb as the playboy haled to court for “breach of promise and marriage.”

And there was the ensemble headed by Performatibo Manila and the Viva Voce Singers hamming it up.

This is another show that should be restaged. After all, how often do we get to see operettas by Gilbert & Sullivan?

A star is born?

The group “Music & Friends” is composed of professionals and voice aficionados with professional-sounding voices, although most of them may not have been formally trained. They meet regularly to sing and play the piano, usually at the Vibal Publishing House in Quezon City.

Maricel Peñaverde, accompanied by the venerable pianist Julie Mendoza, brought the house down with a ringing rendition of Nicanor Abelardo’s “Mutya ng Pasig.” The young soprano, a sister of New York-based tenor Rogelio Peñaverde Jr., is actually a visual artist who has mounted a sold-out exhibit in New York. The unexpected ovation she received at the soiree has encouraged her stage father Roger Peñaverde to schedule a recital in November.