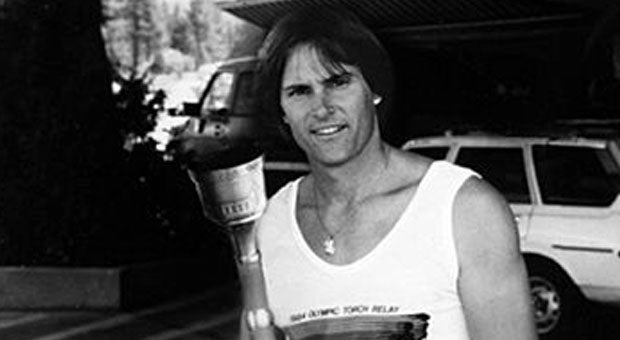 In this 1984 photo provided by Heritage Auctions, American Decathlete, Bruce Jenner poses with the 1984 Olympic Torch he carried through Lake Tahoe, Nevada. AP

NEW YORK — The 1984 Summer Olympic Torch that Bruce Jenner carried through Lake Tahoe, Nevada, is going on the auction block where it could fetch $20,000 or more.

It’s the first major piece of Jenner memorabilia to go to auction since the winner of the 1976 Olympic Decathlon Gold Medal became Caitlyn Jenner.

The 24-inch torch, featuring a brass finish and leather handle, is being offered by Heritage Auctions at its Platinum Night Sports Auction in Chicago on July 30. The seller is Bob Lorsch, a Los Angeles philanthropist and entrepreneur who orchestrated the Tahoe leg of the torch relay and secured Jenner’s participation.

“This torch serves as a wonderful symbol that masculinity and femininity are not mutually exclusive,” said Chris Ivy, Heritage’s director of sports auctions. “The decathlon has long been considered the ultimate athletic proving ground. Jenner has played both gender roles masterfully.”

Jenner was approached to carry the torch as part of the Los Angles Summer Olympic Games to help support Caesars Tahoe’s agenda of giving back to the local community and promoting area youth programs, said Lorsch. The hotel casino held a drawing for a chance to win a place in the relay and sponsored 50 kilometers or about 31 miles of the Nevada route. Seven went to individuals and 42 to local organizations. Jenner was asked to run the remaining kilometer or 1,000 meters.

“Caesars saw it as a tremendous opportunity … to do something more special, never realizing that we would be creating what is truly a piece of history that originated as a piece of sports history, then evolved as a piece of entertainment history through the Kardashian legacy and becoming a cultural phenomenon through the transition to Caitlyn,” said Lorsch.

“Other than trinkets and signed memorabilia, this is the first piece of what I would consider significant Jenner memorabilia to reach the auction block,” said Ivy.

Better known to a younger generation as the patriarch on “Keeping up With the Kardashians,” Jenner, 65, announced earlier this year that he was transitioning to become a woman. Vanity Fair ran glamour photos of him as Caitlyn.

A spokesman for Jenner did not respond to a request for comment.

Caitlyn Jenner will receive the Arthur Ashe Courage Award at the upcoming ESPY Awards on July 15 for her bravery for publicly coming out as a transgender woman.

An E! Entertainment network documentary series “I Am Cait,” depicting Jenner’s transition from a man to a woman, will debut July 26. TVJ