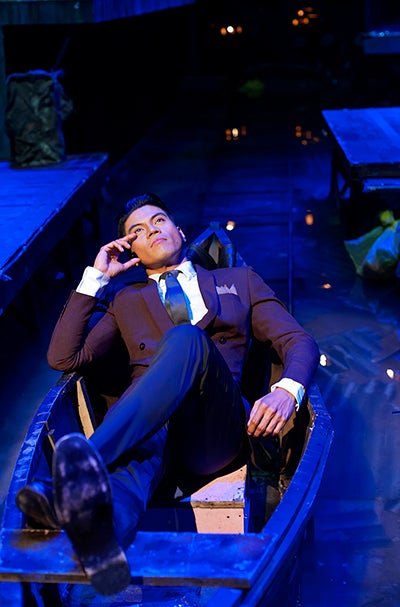 JERALD on the other Tolits, Pepe Herrera: “Pepe is a funny, lovable, adorable jologs, and you can quote me on that ‘coz I love Pepe so much. He’s so adorable. Pasok na pasok yung pagka-Tolits niya. Swak na swak.”

Jerald Napoles is ready to ‘Rak’ your world

Jerald Napoles is a scene stealer.

In “English Only Please,” he stole the scene as the muscled douchebag hitting on Tere Madlansacay, played by Jennylyn Mercado.

He did it again in the film “You’re My Boss,” as the guy who runs Coco Martin’s character’s favorite kambingan restaurant.

And he continues to steal the show in “Rak of Aegis,” now on its fourth run at PETA, as the lovable and lovesick Tolits, a role he shares with the talented Pepe Herrera and, soon, Benj Manalo.

Jerald, whose first love is dancing, said he fell into acting accidentally. He had just graduated and was standing outside Torres High School in Gagalangin, Tondo, about to use the pay phone, when his English teacher Ethel Rocha spotted him. She said, “Jerald, gusto mo maging dancer sa isang musical?” He said yes.

That play was “Jesus Christ Superstar,” and it was Jerald’s first taste of theater.

Jerald, who had been juggling acting and his studies at Pamantasan ng Lungsod ng Maynila, eventually had to quit college and focus on his passion for performing. “Chemical engineering is too hard if you’re working. You cannot solve math problems while solving your own problems,” he said, laughing.

Nine years after he started, in 2010, he got what he calls his “big, big break,” as Jograd in the restaging of the musical “Magsimula Ka.” Jerald credits actor-director Robert Seña for being the first to recognize his knack for comedy. “Sabi niya, ‘Je, can you do comedy?” Deep inside, alam ko na sira ulo ako. Sa bangkaan pa lang sa inuman, alam ko na. Batang Tondo ako eh, yung humor namin Jose Manalo… But in the theater industry, because of my looks, they always cast me as a villain, or ensemble.”

He earned rave reviews for his portrayal of Jograd, with people praising him for his comedic timing.

“Care Divas” followed. Urged to audition by Vince de Jesus, the show’s lyricist, composer, musical director and arranger, Jerald did a song from “Zsa Zsa Zaturnnah Ze Muzikal,” a production he was also a part of. He got the role of Kayla and became the only straight guy to play one of the transgender divas in the musical’s original run. “I’m thankful to our director Maribel Legarda for casting me in both ‘Care Divas’ and ‘Rak of Aegis,’” Jerald said. “They thought nakakatawa siguro kung borta si Kayla tapos biritera. Borta-borta ako tapos naka-panty at bra lang ako sa stage. Nag-ahit ako ng kili-kili at ng legs para dun ha.”

But Jerald is finally breaking out of the bad-guy mold.

After “Magsimula Ka,” he caught the eye of Jojo Oconer, COO of APT Productions and was given the role of Itor in “Iskul Bukol.” “They asked if I wanted them to manage me. I’m thankful to my APT family—chairperson Tony Tuviera, direk Myke Tuviera, Ed Tuviera, Jojo Oconer and my manager Rams David. They’re the ones who started pushing me as a comedian-slash-actor.”

He got to show his flair for improvisation while shooting “English Only Please.” There was no script—he was given the freedom to ad-lib. And when he watched the movie at the premiere in Glorietta, he was pleased to see that director Dan Villegas kept the entire scene. The people around him roared with laughter, saying, “Oh my god, sino yan? Nakakatawa siya.”

Derek Ramsay, the movie’s lead star and Jerald’s good friend in real life, said, “He is a brilliant actor! The most talented actor I have worked with.”

He may dabble in film, TV and commercials, but theater remains Jerald’s first love. “It’s an experience. It’s two hours of experiencing the role, sobrang taas ng intensity, ng art form niya… You discover the role, you make it real…. And there’s on-the-spot appreciation. If you’re bad, if you’re good, you get the reaction on the spot. ”

He’s been getting great reactions as Tolits. Audiences light up every time he (and his flood-proof boat) make an appearance. “This fourth run, I did Tolits in a different way. Yung dati, hopeless romantic bangkero. This time, mas may hiya ng konti, pinabata ko ng konti, mas iyakin, mas sensitive na Tolits.”

He’s such a joy to watch, people couldn’t help but root for him—both Tolits and Jerald.

Jerald is a thinking actor. He studies his craft, the work of others, and constantly pushes himself as a performer.

He has two upcoming shows for GMA, including “My Faithful Husband,” a soap opera starring Jennylyn and Dennis Trillo. He will play Dennis’ best friend.

Yes, he wants to be Tyrion Lannister.