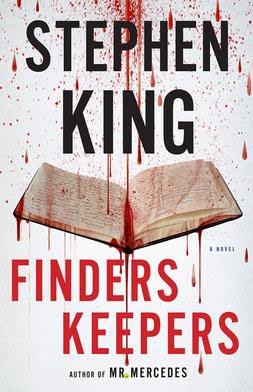 THE COVER for "Finders Keepers"

Something new, something old in Stephen King’s latest

UNUSUALLY for one of the most successful writers in the modern age, Stephen King is flipping the script. Instead of sticking to what he’s done in the past, King has been writing sequels, something he has expressed little to no interest in doing in the past.

Most notably, King released “Doctor Sleep” in 2013, the next chapter in a story he began with 1977’s “The Shining,” the latter arguably King’s most famous book.

One only need to look at the nearly identical covers for the two books to see the connection. He has even brought forward the same set of protagonists—retired police detective Bill Hodges, anti-social genius Holly Gibney and the smart, young Jerome Robinson—to the new book.

While King has left many clues over the years that his books happen in a single, unified universe, it is rare for him to offer such direct links as he has recently done.

“Finders Keepers” begins in 1978, at the home of a J.D. Salinger-esque writer named John Rothstein. Rothstein became a sensation writing a trilogy of novels about a character named Jimmy Gold before abruptly retiring and simply stopped writing.

But now an obsessed fan named Morris Bellamy—unhappy about how Rothstein had ended the trilogy—breaks into Rothstein’s home and kills the author. To his surprise, Bellamy discovers that Rothstein had not actually stopped writing, but had been continuing Jimmy Gold’s adventures in a bunch of Moleskine notebooks.

Before reading the notebooks, Bellamy puts the notebooks and a large amount of Rothstein’s cash in a trunk, burying it in his backyard—before getting arrested for rape when he becomes drunk. Bellamy winds up in prison for 35 years.

In 2009, a young man named Pete Saubers—whose family had moved into what used to be the Bellamy home—uncovers the trunk. He sends the money covertly to his family to help ease their financial woes, and then reads the notebooks, falling in love with the new Jimmy Gold adventures.

But when the money is gone, Pete tries to sell the notebooks—just as Bellamy is released on parole. Pete and his loved ones are suddenly in danger, and it will be up to Hodges and company to help save them.

This part of “Finders Keepers” happens several years after the vehicular mayhem of “Mr. Mercedes” (that book will soon be adapted into a TV mini-series).

After a fascinating, detailed set-up that takes up most of the book, King then sends the plot screaming towards its ending with nary a stoplight in sight.

Not only is “Finders Keepers” free from any kind of outrageous magic or otherworldly presence, it is also not a horror novel, just like “Mr. Mercedes.” It is instead more of a traditional whodunit, an American detective story, albeit an extremely well written one.

It is much more a page-turner than a book that would keep you up at night, as it is a very straightforward read; not too many twists in this one.

What “Finders Keepers” does have in common with past King books is the author’s love for writing about writers, something he did in “The Shining,” 1998’s “Bag of Bones,” and, of course, 1987’s “Misery.”

The obsessed fan Anne Wilkes’ actions towards novelist Paul Sheldon over the ultimate fate of a fictional heroine named Misery Chastain are very similar to Bellamy’s own vengeance against Rothstein due to what he thinks happened to the character Jimmy Gold.

In “Finders Keepers,” however, King changes things up as Bellamy finds out Jimmy Gold’s story continues, but not before he kills Rothstein. Above all else, Bellamy wants to read those notebooks; he will wait a long time and do anything to do so. That makes him as dangerous as anything in King’s fictional universe, magical or otherwise.

“Finders Keepers” will be followed by the forthcoming “End of Watch” to round up a trilogy (readers are calling it the Bill Hodges Trilogy); King has never done a trilogy before.

True to his old style, though, Stephen King displays his assured craft amid all the fresh elements in “Finders Keepers,” a novel that showcases a writer who works to his strengths and yet is continually trying out something new.