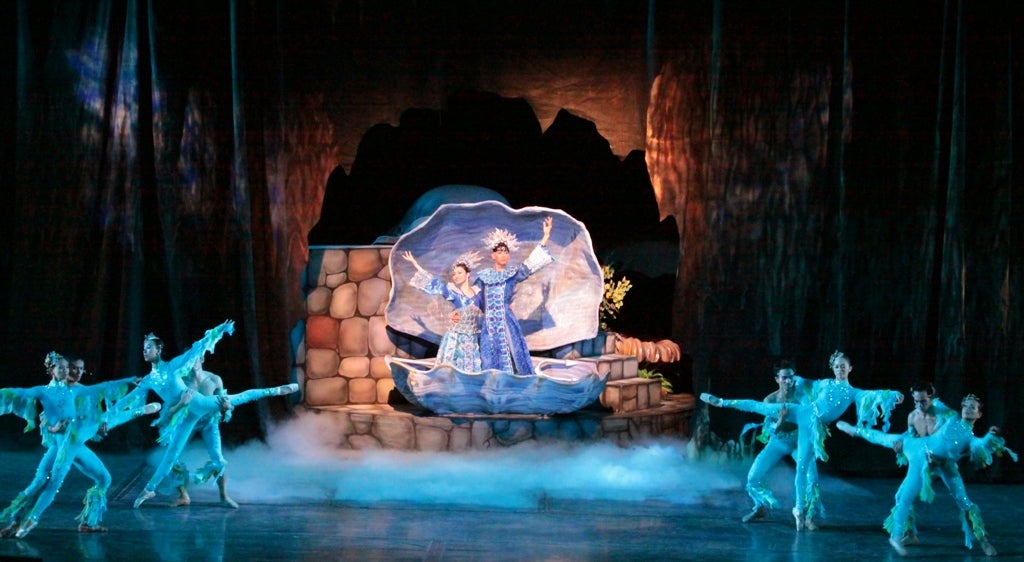 Celebrating literature and its larger-than-life characters, the BM will stage dance productions based on Severino Reyes’ “Tatlong Kuwento ni Lola Basyang” and Shakespeare’s “Romeo and Juliet,” as well as on “Pinocchio,” “Spartacus” and “Hansel and Gretel.”

In “Tatlong Kuwento ni Lola Basyang,” BM will stage three productions based on magical stories about a princess’ love for a bird, a hero in search of his sisters, and the mystery behind an enchanted violin.

“Ang Prinsipeng Mga Ibon” is the captivating story of a princess fighting for love amid her father’s disapproval. It is choreographed by Osias Barroso, with enchanting music arranged by Mon Faustino.

“Ang Kapatid ng Tatlong Marya” is about a young hero’s search for his three bewitched sisters. The piece is choreographed by Ballet Manila artistic director Lisa Macuja-Elizalde with original music by Joey Ayala.

Finally, “Ang Mahiwagang Biyulin” explores the mystery behind a magical violin transforming an unkind rich man. Choreographed by Tony Fabella, the production is set to music by Ryan Cayabyab.

“Lola Basyang” was the pen name used by Reyes, the founder and editor of Liwayway magazine. He produced over 400 stories.

BM will then hold the Asian premiere of the Shakespeare tragic romance as interpreted by Nashville Ballet USA artistic director and CEO Paul Vasterling, known for his marvelous ballet translation of Shakespeare plays.

In an interview with Nashville Arts magazine, Vasterling explained the similarity between Shakespeare and ballet, emphasizing that both were forms of expressions that came with rules that needed to be followed.

“When you are able to work that out and the rules and the feelings become one, it’s magic. It leads to moments that will last forever,” he said.

Manila Symphony Orchestra, with guest conductor Alexander Vikulov of the Mariinsky Theater, will perform the music.

Ballet Manila will mount the world premiere of its co-artistic director Osias Barroso’s interpretation of the best-loved story of Geppetto and his wooden puppet.

“Pinocchio” was initially a one-act piece, and a regular fixture on the BM repertoire. This year, the full-length production is made more colorful and exciting with more characters, interesting twists, a magical dream brought to life.

The season will continue with Alan Hineline’s “Hansel and Gretel,” a special show dedicated to the young audience.

“Rebel” is BM’s version of the famous “Spartacus,” a piece associated with Bolshoi Ballet. It is a collaboration between London-based choreographer Martin Lawrance of the Richard Alston Dance Company, Filipino playwright Floy Quintos, and musical director Gerard Salonga.

“Rebel” will have the 1986 People Power Revolution as backdrop. Exploring themes of bravery and the struggle for freedom, the production also celebrates the 30th anniversary of the historical Edsa Revolution.

Lawrance, who’s collaborating with BM for the second time, says: “True rebels stand up for what they believe in, not necessarily against what’s right. They know who they are and do not compromise their individuality or personal opinion for anyone. They’re straightforward and honest and they will sure as hell tell it like it is. There is a rebel in all of us!”

The rich symphonic Khachaturian score will be executed by ABS-CBN Philharmonic Orchestra under the baton of Salonga.

Macuja-Elizalde said that by translating literature into dance dramas, she would like to look at the BM corps as a “storyteller on toes.”

The 2015-2016 season will close with the Ballet Manila Choreography Competition on March 19, 8 p.m., at Aliw Theater.