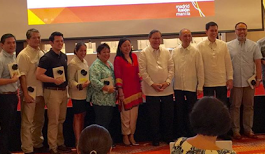 Get set for Madrid Fusion Manila 2016

THE grand food convention that was Madrid Fusion Manila, successfully held last April 24-26, will be back next year.

The contract signing was held today, July 13, at the ballroom of Fairmont Makati.

Videos of Madrid Fusion Manila’s debut edition were shown before the signing.

“Madrid Fusion Manila was not an accidental occurrence,” said Jimenez, who cited the importance of Manila as a center for culinary excellence in the world.

International chefs who have confirmed to attend and participate in discussions next year include Eneko Atxa of Michelin-starred Azurmendi Restaurante in Spain; Yoshihiro Narisawa whose Les Créations de Narisawa in Japan was recently ranked 8th best restaurant in Asia; and Joan Roca of El Celler de Can Roca, the S. Pellegrino world’s best restaurant 2015.