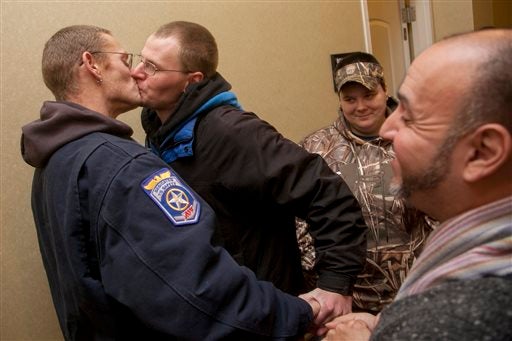 Patrick Freideman, left, and his husband Spencer Freideman kiss during their wedding in a hallway at the Hampton Inn in Ogden on Monday, Dec. 23, 2013. The Freidemans arrived at the county clerk's office on Sunday and spent the night on the sidewalk outside in order to make sure they had a chance to get married in Utah. AP

US military to consider transgender troops

WASHINGTON, United States – The US military will consider opening its doors to transgender people who are currently banned from service and can be booted out if discovered, Pentagon chief Ashton Carter said Monday.

The secretary of defense made the revelation as he unveiled a working group that will be studying the issue during the next six months.

“The Defense Department’s current regulations regarding transgender service members are outdated and are causing uncertainty that distracts commanders from our core missions” he said in a statement.

As a result, the Pentagon “will create a working group to study over the next six months the policy and readiness implications of welcoming transgender persons to serve openly,” he said.

In the United States, despite the 2011 repeal of the divisive “Don’t Ask, Don’t Tell” law, which banned gays from serving openly, transgender people have remained banned.

“At my direction, the working group will start with the presumption that transgender persons can serve openly without adverse impact on military effectiveness and readiness, unless and except where objective, practical impediments are identified,” Carter said.

“We have transgender soldiers, sailors, airmen and Marines — real patriotic Americans — who I know are being hurt by an outdated, confusing, inconsistent approach,” he added.

Moving forward, he directed all authority regarding administrative discharges for those “diagnosed with gender dysphoria or who identify themselves as transgender” to Under Secretary of Defense for Personnel and Readiness Brad Carson.

“Incorporating the presumption that transgender individuals can serve openly, without adverse impact on the military effectiveness and readiness, is a step in the right direction,” he said.

“But it is long past time that we definitively and affirmatively make it clear that gender identity should have no bearing on an individual’s ability to serve,” he added.

There are believed to be thousands of transgender people serving in the US armed forces, but, under the current rules, if they are discovered the military is required to dismiss them.

“Transgender men and women in uniform have been there with us, even as they often had to serve in silence alongside their fellow comrades in arms,” Carter said.

Chelsea Manning, the US soldier convicted of leaking a trove of secret documents to the anti-secrecy website WikiLeaks, is perhaps the best-known transgendered person to have served in the US military — at the time living as a male, Bradley Manning.

Manning is serving out a 35-year sentence at the Fort Leavenworth military prison in Kansas for the massive leak, where she has told journalists that much of her life has been marked by a lonely anguish over her gender identity.