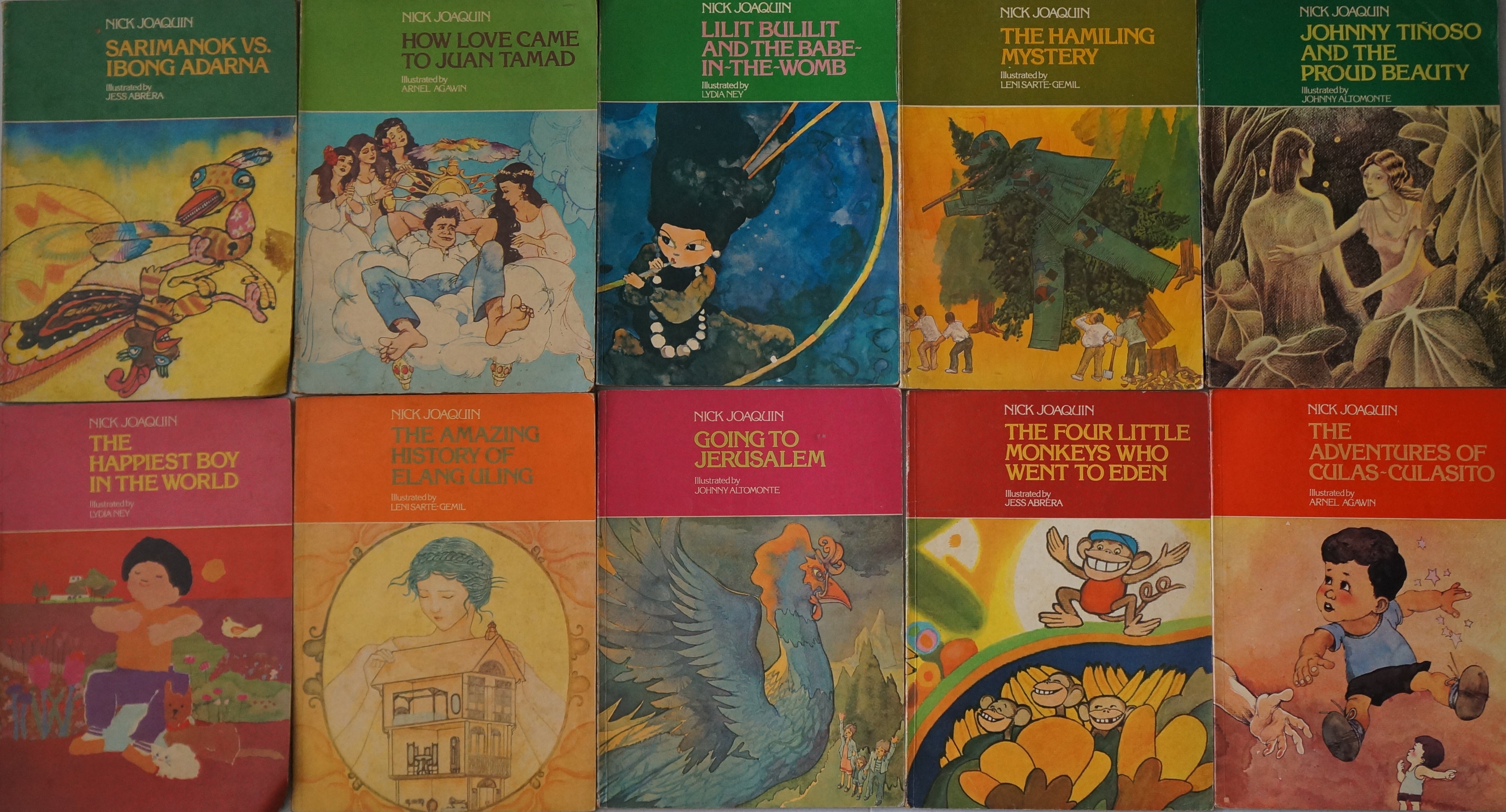 While other people collect watches or bags, we consider our old children’s books as treasure. Through the years, the family has given away some of these beloved books, but we have held on to the ones that mattered the most, no matter how yellowed or dog-eared.

Finding such gems in piles of used paperbacks is fun shopping for us, and this craziness has been passed on to our four-year-old kid, Jack, whose idea of a successful trip to the mall is going home with a preloved book.

In our hunting expeditions, though, we have never seen copies of Nick Joaquin’s “Pop Stories for Groovy Kids.” Because of this, our complete collection of all 10 stories in the series is one of our most treasured possessions.

It’s been three decades since we read these stories again and we still can’t get them out of our head.

So, imagine our enthusiasm in pressing the like button on a Facebook page (www.facebook.com/nick.is.groovy) lobbying for a reprint of the series. “This group aims to rekindle interest in Nick Joaquin’s not-so-famous (but just as brilliant) foray into children’s book writing, and encourages people to clamor for its republishing.” So far the Facebook page has gotten 320 likes.

The page’s “About” section described the series as “a slightly obscure collection of short stories for the young and young at heart penned by the National Artist himself and published exclusively by the Mr. & Ms Publishing Company as a privately funded limited edition in 1979. The series publication was part of a worldwide observance of Unesco’s proclamation of the said year as the ‘International Year of the Child.’”

To us, some stories seemed like original works while the rest were imaginative what-ifs or spin-offs of classic stories.

The accompanying artworks for each story were just as vivid and magical. The huge, dreamy illustrations were the reason we could not bear to give the series away.

From “Johnny Tiñoso and the Proud Beauty”: “She is lovely; he looks horrid. She is rich; he collects the garbage. Such an odd couple. Then she sees him bathing. Result: Beauty and the Beast change places.”

Before the twists afforded in “Shrek” was this story of a wealthy, arrogant beauty and an ugly but kind ape-man. Johnny Altomonte’s enchanting pictures aptly Filipinized and brought this role-reversal tale home. Some language may not be suitable for young children, though.

“The Hamiling Mystery”: “Why are the townspeople of Hamiling so nervous about music in the air? Because of a crime committed long ago. But when one crime is cleared up, it’s time for another one!” This disturbing take on “The Pied Piper of Hamelin” does not end with the town’s children being led away by the piper, but explores what happens three decades later and reminds you to be careful what you wish for. Moodily illustrated by Leni Sarte-Gemil, this tale has a satirical ending that might go over young ones’ heads.

“Sarimanok vs. Ibong Adarna”: “You’ll be scared to tell a lie when you learn what happened to two schoolgirls who each claimed to have a fabulous creature for a pet. Their wild, wild lies came true.”

This story, based on two Pinoy mythical creatures, is both hilarious and frightening.  Elsie and Nanette learn their lesson the hard way when their outrageous inventions come to life. Jess Abrera’s illustrations are as bold and colorful as the narrative.

“How Love Came to Juan Tamad”: “At last, the correct explanation of why poor Mariang Makiling must forever nurse a broken heart, and also why Juan Tamad is a pop idol—yes, a model for the young!”

Whimsically illustrated by Arnel Agawin, this bizarre story mashes up popular characters from Filipino legends: Mariang Makiling, Monte Banahaw, and Juan Tamad. The characters are complex, with no one being purely heroic or villainous; the story’s ending benefits only the unlikely anti-hero. (You can download a PDF copy of this story on the nick is groovy Facebook page).

“Lilit Bulilit and the Babe-in-the-Womb”: “Whenever she bought a pop drink she asked for an extra straw. Why? Shocking is the secret of the tiny lady who just loves to dress for dinner. And what a dinner!” The most haunting tale of all 10 books is this urban take on the most feared Filipino monster, the aswang. Lilit Bulilit is a tiny, acerbic woman who sucks unwanted unborn babies through soda straws. Warning: foul language and mature content. Beautiful, unforgettable watercolor and ink drawings by Lydia Ney set the story’s dark tone.

“The Happiest Boy in the World”: “Imagine suddenly finding that you are no longer you, that you’ve stopped being you! It happens to this Ritz kid on his way home one evening. And he can’t go home again!”

This loose translation of Mark Twain’s “The Prince and the Pauper” is more magical, but still allows a sly observation on social inequality. Ney shows her range as an artist by mixing up torn bits of colored paper to make collages.

“The Amazing Story of Elang Uling”: “Wicked are the stepmother and stepsisters who make a sooty slavery of her; but it’s Santacruzan time and Elang Uling shines as May Queen… till the midnight hour strikes!”
Sarte-Gemil’s elegant, intricate illustrations and Filipiniana fashion of this localized retelling of Cinderella are absolutely dreamy.

Going to Jerusalem: “A banca strays into a swimming pool. And for three children, that’s the start of an Easter adventure that involves a grouchy bush, a weird old woman and the tabon bird.”

Reminiscent of “The Chronicles of Narnia” and “Hansel & Gretel” is this fantastic tale of siblings who embark on a journey to see their parents in faraway Jerusalem. Altomonte’s somber yet fanciful watercolors effectively transport the reader along with the children’s travels.

“The Four Little Monkeys Who Went to Eden”: “One is deaf, one is dumb, one blind. And one is deaf, dumb and blind. But the way to reach Eden (with King Kong, among others, assisting) is to: hear, see, speak no evil.”

This is an extraordinary spin to more internationally known figures King Kong and the three wise monkeys (see, speak, hear no evil), about making do with what you have, doing what’s right, telling the truth, persistence and family. Bright, psychedelic cartoons by Abrera bring life to this otherwise serious story.

“The Adventures of Culas-Culasito”: “How he crawled right into the TV picture; and how he got even with the toughs who ate up his little dog; and how he almost freed the great Bernardo Carpio from his chains.”

Three short stories squeezed into a little boy’s series of unbelievable exploits effortlessly interspersed with Philippine folk culture. It’s a nod to the prime-time telenovela, being raised by a nanny, spanking and scaring children into obedience, dog-eating, an encounter with an aswang and the local Hercules. Agawin’s komiks-style doodles juxtaposed with realistic images boost the reader’s imagination.

We have asked a favorite publisher some months back about the possibility of reprinting “Pop Stories for Groovy Kids,” but one editor thought the material was too dark.

We can see the stories as talk points to have with this generation’s children, an interesting glimpse on what it’s like growing up back in the day.

Having read them all over again 30 years later, this time with a parent’s eye, we realize that the darkness of the stories is no more shocking than the Brothers Grimm or Hans Christian Andersen fairy tales.