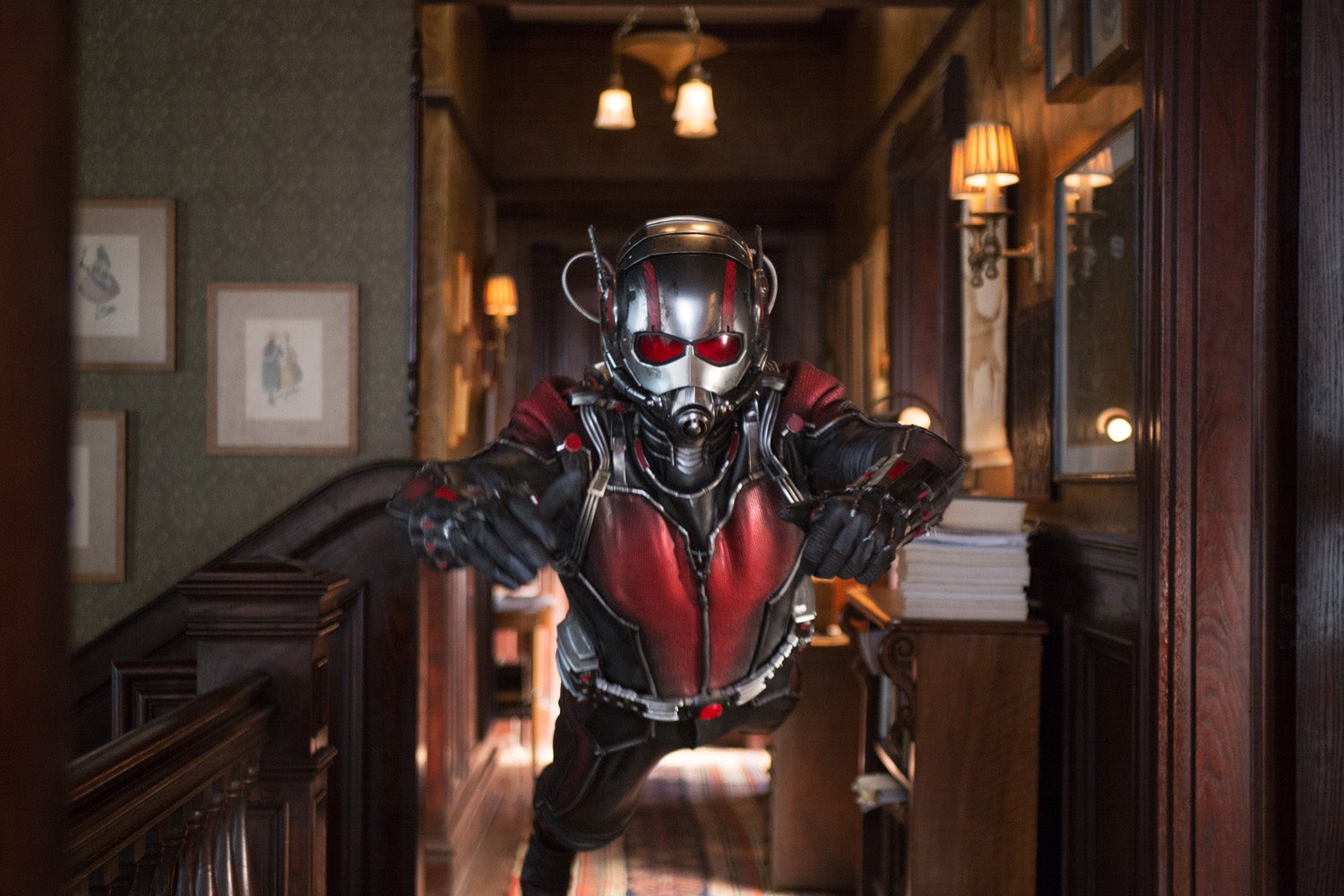 The Marvel Cinematic Universe (MCU) has been blowing away the box office competition with both proven properties (the Avengers films) and the unexpected performers (“Guardians of the Galaxy”).

Marvel’s “Ant-Man” belongs to the latter category, as the shrinking, insect-controlling hero has been an easy target for jokes. But Ant-Man, created by Stan Lee, Larry Lieber and Jack Kirby, has a rich and complex history, first appearing in 1962’s “Tales to Astonish” # 32 and becoming a founding member of the Avengers before falling into a darker place, eventually inventing the evil robot intelligence Ultron.

But “Ant-Man” the movie keeps things simple and quite bright. The original Ant-Man, Dr. Hank Pym (Michael Douglas, yes, “The American President” himself) developed the Pym Particle, which allowed him to shrink matter. But when he feared the technology would be misused, he hid his invention. But years later, the ambitious businessman Darren Cross (Corey Stoll from TV’s “The Strain”), who stole Pym’s company, is coming very close to developing the same tech, calling it the Yellowjacket, to sell to the highest bidder.

Together with his daughter Hope Van Dyne (Evangeline Lilly from TV’s “Lost”), Pym plans to steal the tech. Pym recruits an ex-con named Scott Lang (Paul Rudd) to carry out the mission as the new Ant-Man.

Rudd, the charming goof with leading-man looks in everything from “Clueless” to “Anchorman,” plays down his eclectic energy here and physically transforms himself into Ant-Man, playing a ripped superhero with very human qualities, as all Lang wants to do is redeem himself and be there for his daughter Cassie.

The first thing “Ant-Man” has going for itself is a good cast, notably with Douglas letting loose as Pym. Stoll makes for a convincing villain as Yellowjacket and Michael Peña steals his scenes in a small but memorable role as one of Lang’s cohorts.

Director Peyton Reed (“Bring It On”) brings a brisk energy to the film, which jumps forward just like a comic book page jumps from panel to panel. The film’s original director Edgar Wright (who still gets story and screenplay credits) has his fingerprints all over the film. If comic book movies are now spinning off into genres, “Ant-Man” is basically the comedic superhero heist film, kind of like “Ocean’s Eleven” with super-powers.

“Ant-Man” has its few minor ticks. The dramatic sequences don’t fly as well and the overall plot resolution arrives too easily—Douglas is transformed into an exposition-spouting machine to get through those scenes. But “Ant-Man” is at its best when it’s barreling forward with its myriad, marvelous action scenes.

In “Ant-Man,” the cutting-edge screen technology and popular culture match up to provide eye-popping fight scenes that has Rudd—in the suit—changing sizes as he jumps, riding flying ants and winding up in inventive sequences, including one with Thomas The Tank Engine.

It also effectively, organically deploys the same kind of offbeat humor seen in “Guardians.” Here’s a terrific, tiny tip: Keep watching until all the credits are done so you don’t micro-miss a single detail.

Because the property isn’t as well-known or respected as the Avengers, some expected Marvel to take the easy route with “Ant-Man.” It’s funnier and better than you can expect. Not only does “Ant-Man” takes the effort to establish that it is indeed a worthy part of the MCU (references abound), but it continually surprises the viewers with its own special abilities. Like Ant-Man himself, the movie gets bigger the more you watch it.