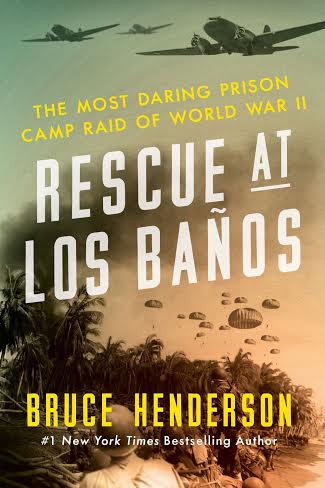 THE COVER for "Rescue at Los Banos" by Bruce Henderson

TAKEN by the Japanese military and then retaken by the Americans during World War 2, the Philippines was the setting for great tales of heroism that have been overshadowed by missions elsewhere.

But there has emerged a subgenre of nonfiction writers telling true tales about the desperate endgame struggle between the two forces close to the end of WW2.

Many have heard about the US Army Ranger-led raid on the Cabanatuan that freed over 500 prisoners of war, an event that’s been famously chronicled by in books Hampton Sides in “Ghost Soldiers” as well as William B. Breuer’s “The Great Raid on Cabanatuan,” and in film in by director John Dahl’s “The Great Raid” in 2005. Some consider the Cabanatuan raid as the greatest rescue mission of the war.

A former US Navy weatherman and a journalist, Henderson has made a name for himself writing excellent nonfiction books such as the best-selling “And The Sea Will Tell” and “Hero Found: The Greatest POW Escape of the Vietnam War.” Henderson combines impeccable research with muscular prose in retelling these amazing true-to-life events.

“Rescue at Los Baños” begins in the Philippines right before the Japanese raid on Pearl Harbor in 1941. Henderson gives readers a glimpse of the life of Americans living in Manila as the city falls to the advancing Japanese forces. First the Americans, together with other foreign nationals, are housed at the University of Santo Tomas campus, but in 1942, many of them were shipped to a new internment camp at Los Baños, Laguna, 40 miles from the capital. More and more internees would be moved there.

After a good start, conditions at Los Baños deteriorated quickly under the hand of a Japanese warrant officer named Sadaaki Konishi.

Konishi began an escalating campaign of cruelty against the internees, starving them, shooting some arbitrarily. Prisoners were dying in the night due to starvation. The desperate internees wondered, Where were the American soldiers?

The American military was fighting back on the islands as part of Gen. Douglas MacArthur’s “I Shall Return” mission. Worried that the Japanese army would begin massacring the internees as the Americans got closer to Manila, missions were mounted to liberate the camps at Cabanatuan and UST. But the Los Baños camp was the last remaining camp in Luzon—and the Americans didn’t even know it existed.

“I want you to liberate Los Baños as soon as you can,” MacArthur tells one officer. “And if you’re going to do this, do it right.”

Upon finding out of the Los Baños camp and the conditions within, the leaders of the 11th Airborne Division plot an ambitious rescue that culminated on Feb. 23, 1945. As members of B Company jumped into Los Baños, ground elements led by the elite Recon Platoon and joined by both Filipino guerillas and escaped internees assault the camp.

Henderson brings the entire mission to life by focusing on the experiences of those who were there—giving them the feeling of being there themselves. Henderson imbues the narrative with both authenticity and excitement.

Readers will learn, for example, about the unusual love story between fellow internees Jerry Sams and Margaret Sherk, the everyday bravery of nurses like Dorothy Still, and the dedication of unsung heroes like the 11th’s intelligence officer Henry Muller Jr. Their individual stories intertwine into a taut, tense and terrific tale.

“Rescue at Los Baños” is an unforgettable retelling of an event many Filipinos don’t even know really happened—but should know.

Bruce Henderson’s book stands as a testament to the limits of human endurance, the cruelty of some and the courage of others. “We’re going to do the most important thing we’ve ever done,” an American officer says. “And maybe we’ll ever do.”