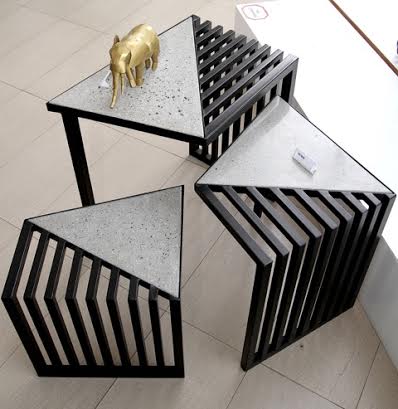 ACCENT tables made of steel and granite top by students of De La Salle-College of St. Benilde. PHOTOS BY RICHARD REYES

On the 12th-floor amphitheater of DLS-CSB’s School of Design and Arts in Manila were displayed creations—either actual product prototypes or 3D-printed and conventional models—by students of DLS-CSB, University of Santo Tomas (UST), Mapua Institute of Technology and Bohol Island State University (Bisu).

This marked the second year DLS-CSB held such an event; this time it was titled “Redefine Design,” with a keynote speech by global Filipino furniture designer Kenneth Cobonpue.

Industrial design, perceived as a relatively new discipline in the Philippines, has been thriving—with schools seeing a steady increase in the number of enrollees.

Achievements by such trailblazers as Cobonpue and Budji Layug have inspired Filipino students to enter the field.

Gabrino and collaborator Isabel Mina did a glass-top table supported by a series of round metal bars, which they named Polaris.

“When viewed from the top, the series of straight lines that make up the table’s legs reminded me of a star,” said Gabrino. “That’s how it got its name.”

This table was featured last March with the works of other budding industrial designers during the Manila FAME.

Gabrino was at his wits’ end trying to think up a design when he hit upon the idea of doing something inspired by linear drawings he once did as a child.

He and Mina spent three days refining the concept.

He and his fellow students decided to pay homage to World Industrial Design week to give recognition to a discipline that has, in his view, been around in the Philippines “longer than what most people think.”

Furniture, accessories, automotive and product design all fall under the purview of industrial designers.

DLS-CSB’s Anne Gaw, a junior student, and her group produced Piña, an accent chair made of steel and woven abaca.

The circular armrest and backrest reminded the group of pineapple. Painted in yellow and apple green, the chair echoes the fruit’s colors. Its crisscross legs have kept the interpretation from becoming too literal.

A few days into the exhibit, Gaw and her group had already found a buyer for their chair, and sold it at a profit.

Since part of Bisu’s mandate is to give back to the community, its students’ training includes helping various NGOs, livelihood associations and fledgling companies in Bohol by designing their products for free.

“Apart from honing them to design products they like, we also train them to design everyday objects like notebooks, buttons and beads, which can be easily duplicated and sold by ordinary people to help them earn money,” said Bisu instructor and alumnae Angeline Baldapan.

Bisu students presented actual products and models, while those at Mapua mostly did models.

Stephanie Yebra, a junior at Mapua, did a 3D-printed model of Lucid. Inspired by banana leaves, the lamp comes with hidden light that is said to glow through layers of strategically positioned shades.

Like most Mapua students, she would get a chance to do the actual product prototype in her senior year.

The exhibit also became a gauge of how modern and well-funded a school’s design program is.

“We usually integrate the use of machines like laser cutters, 3D printers and milling machines during the students’ third year,” said Bisu’s Baldapan.

One of Bisu’s objectives is to inspire students to design souvenir items for Bohol tourists.

“Small souvenir items that resemble tarsiers, for instance, weren’t made in Bohol, but in Cebu and Manila,” said Baldapan. “We want to improve their quality by coming up with our own designs.”

UST students did actual products, including a rocking chair made of teakwood and matching set of coffee table and stool made of mussel shells and resin.

Equipped with several pads on its armrests that produce certain sounds to call attention, the rocking chair is designed for people suffering from ailments, as well as the elderly.

Apart from being decorative and functional, the coffee-table-and-stool set is a space saver. You can stuff both hollow cylinders with books, magazines and all sorts of small objects since each has a concealed opening on top.

By marrying form and function despite their youth and lack of experience, these students have shown that they’ve got what it takes to one day shine in the competitive world of industrial design.