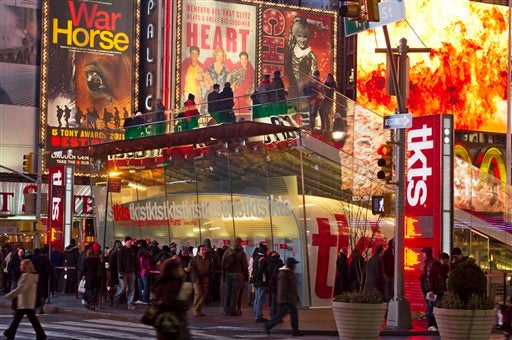 Theatergoers line up to make purchases at the The Times Square TKTS discount ticket booth in the heart New York's theater district. AP

NEW YORK—Come on along and listen to the lullaby of Broadway: Marimba ringtones! Rat-a-tat texting! The shaming “shhhhh!”

Years of tension over audience behavior hit a dramatic climax this month, when a teenager clambered onto a stage to try to recharge his phone and veteran star Patti LuPone whisked a phone away from a texting spectator, hours after performing a matinee punctuated by incoming calls. LuPone says she’s even considering quitting stage work because of the electronic onslaught.

As Broadway faces off against pocket-size sound-and-light shows, performers and some patrons say a hyper-connected culture are shredding the immersive experience of live theater.

“I’ve just spent pretty close to a day’s salary on theater tickets — I don’t want to be distracted by people turning on their phone to check the time or text,” Broadway fan Robin Satty of Piscataway, New Jersey, said this past week as she went to see the best-play Tony winner “The Curious Incident of the Dog in the Night-Time.”

Still, some theater insiders say it’s time to educate, rather than scold, an increasingly connected audience that may not be steeped in theater etiquette. Some even are experimenting with embracing patrons’ digital habits, to a point.

“We have to be very careful that we let people know what’s appropriate without pushing them away,” said Broadway producer Ken Davenport, who allowed some “tweet seats” in back rows during a performance of “Godspell” a few years ago.

Distractions in Broadway’s storied houses are as old as candy wrappers and coughs, and habitués have complained about declining audience decorum since T-shirts started rubbing elbows with sport coats. But smartphones have proved especially nettlesome, with their combination of sounds, cameras and glowing screens.

“If you’re onstage, you notice every single person who’s texting,” said actor Will Swenson, whose Broadway credits include starring roles in “Les Miserables” and “Hair.”

“The second that a light pops on in the audience, it’s impossible to not say, ‘Oh, yeah, I’m in a theater, and someone is out there not paying attention to my best efforts to tell a story,'” said Swenson, who recalls grabbing a video-shooting patron’s phone during “Hair.”

Other stars, from Matthew Broderick to Frances McDormand, have briefly stopped shows in response to spectators talking on phones and shooting video. But usually, actors just forge ahead.

New York City largely outlawed cellphone use in theater audiences in 2003, but officials couldn’t immediately say whether anyone has been fined. Theaters routinely advise patrons of prohibitions on taking photos or videos and try various tactics to urge them to silence phones. In many theaters, cell reception is spotty at best — although blocking cellphone signals is illegal for consumer purposes.

Still, accounts of boorishness on Broadway abound: patrons taking calls during shows and squabbling with seatmates who tell them to put phones away. Members of the cast of “Hamilton” accused Madonna of texting during a performance of the show off-Broadway this spring; her publicist has denied it. Then there was the bizarre case of actor Shia LaBeouf, who pleaded guilty to disorderly conduct last year after smoking cigarettes and yelling at the performers while watching “Cabaret”; the case is on track to be dismissed if he stays out of trouble.

“Every now and then you’ll get somebody who’s just completely clueless about theater etiquette, or with an odd sense of entitlement, who will pick of the phone and take a call,” said Cheryl Dennis, the house manager of the intimate Circle in the Square theater.

Cellphone use and loud conversation ranked high when ticket discounter Goldstar asked some of its 6 million members recently about show faux pas, though the share of people who felt texting and photo-taking were OK “if done discreetly” was in double digits.

Yes, there are no-phone zones in churches, hospitals and courthouses, but “is that the atmosphere that we want?” asked University of North Carolina drama professor Scott Walters. The Greeks, Shakespeare and Moliere wrote for loud crowds, he noted. Of course, rudeness isn’t new. But as  technology  and social media blur lines between personal and public, “there’s been an erosion in people’s norms of public space,” said Lewis Friedland, a University of Wisconsin sociology and communications professor.

To some extent, Broadway may be seeing the result of mixed messages. While barring cellphones during performances, theaters also exhort patrons to tweet and post about shows.

Broadway shows attracted a record 13.1 million patrons last season, up 7.3 percent from the previous season. Newcomers may not know the rules, despite advisories — the teen who recently tried to plug his phone into a prop outlet shortly before a performance of “Hand to God” said he didn’t realize the stage was off limits, while also acknowledging he’d been drinking.

“We don’t want people thinking, ‘I’ve got to memorize a bunch of rules,'” Goldstar CEO Jim McCarthy said. “There is one: Don’t ruin it for everybody else.”