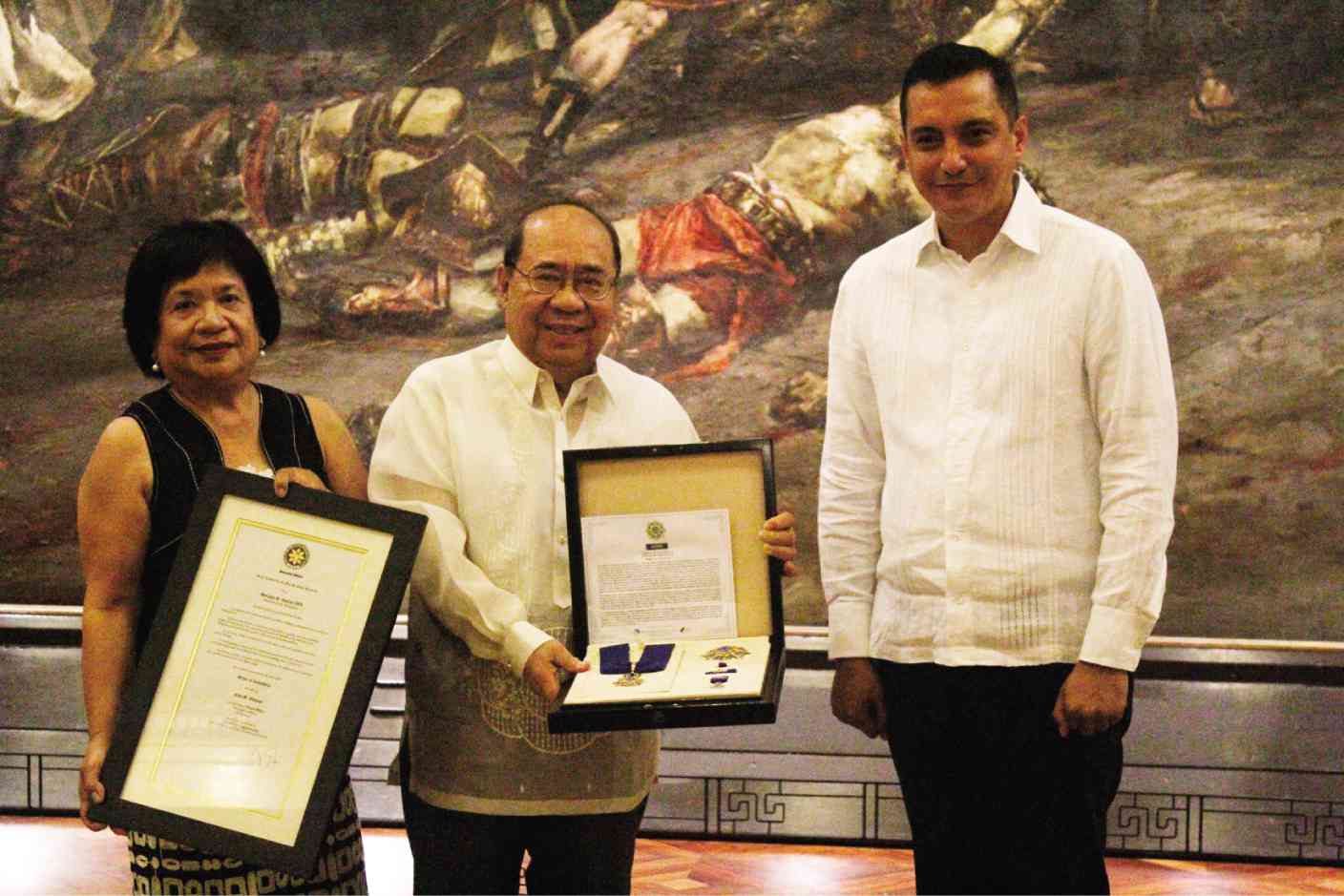 JEREMY Barns (right) with the son of painter Galo Ocampo.

Painter Galo B. Ocampo was posthumously conferred the Order of Lakandula with the rank of Marangal na Pinuno in rites held at the National Museum on July 22.

The artist, who died in 1985, served as curator of the Presidential Museum of Malacañang and later became director of the National Museum.

His experiences during World War II inspired his flagellant series: “Ecce Homo” (Behold the Man) showed a bound Christ with warplanes and parachutists in the background; “Shades of Things to Come” had a flagellant lying prostrate while airplanes cast shadows on the sand.

Ocampo was the first Filipino to study the art of heraldry abroad and become a member of the International Institute of Genealogy and Heraldry in Madrid.

He made the seals of the different Archbishops of Manila at the Manila Cathedral, and designed the stained-glass windows of Sto. Domingo Church in Quezon City. He also designed the coat of arms and seal of the Republic, of the President of the Philippines, and other symbols of the state.

On his Facebook page, Undersecretary Manuel Luis “Manolo” Quezon III posted a photo of his father Manuel L. Quezon Jr. with Ocampo and his wife Loretta.

Quezon III recalled how his “Tito Galo” was a good friend of his dad: “With his wife and sons, they were always dependable friends when we lived in Washington. I remember his studio in Virginia: the easel on which there was a ‘Madonna and Child’ in progress; the encyclopedic expanse of his knowledge as I overheard him and my dad discuss archaeology, history, books, painting and artists; and what an amiable man he was, with his pipe and quiet ways.”

At the conferment last Wednesday, Ocampo’s sons received the Order of Lakandula on their father’s behalf for “his accomplishments as a Modernist painter and as a specialist and artist of heraldry; for his works, considered to be of the highest order and a significant part of national heritage; and for his leadership as director of the National Museum from 1962-1968.”

Quezon III writes that Ocampo’s stint at the National Museum was cut short: “Tito Galo tried to clamp down on the trafficking of antiquities and was removed as director of the National Museum by Madame (former First Lady Imelda Marcos). He ended up migrating to the US where he spent his last quiet decades. He and Tita Loretta rest in peace in Arlington, VA. How he must have missed the tropical light that still shines from his canvases.”