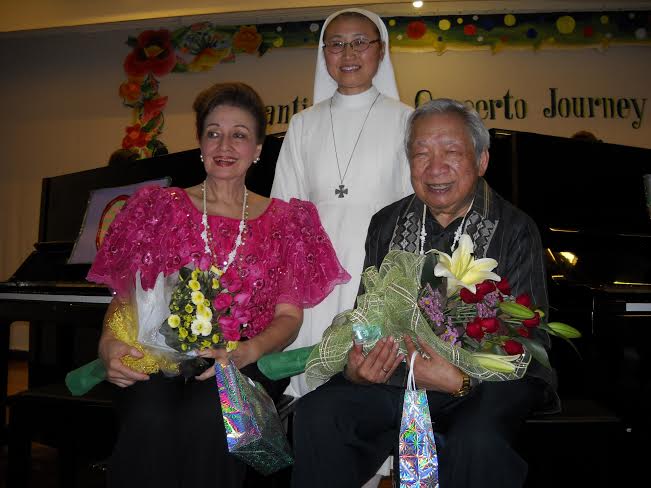 At the Sisters of Mary Girlstown in Biga, Silang, Cavite, the duo kicked off their 24th journey-series before the school’s 3,100 students and some guests from Manila.

At exactly 4 p.m., the enthusiastic students who brought their own stools were already orderly seated in the wide space.

Reyes prefaced the performance with a brief inspirational talk. He said listening to classical music enhanced the listener’s intelligence apart from the therapeutic value derived from it. He explained his role as the “orchestra” of the duo and announced that an open forum would follow at the end of the performance.

The audience listened attentively and, obviously touched, could not help but burst into a thunderous applause at the end of the first movements of both concertos.

An otherwise lazy Sunday afternoon bounced with the majesty and grandeur of Beethoven’s music, and all the more percolated with the dazzling brilliant virtuosity of the Saint-Säens’ concerto that followed it.

They played brilliantly and were focused as ever. They held the audience captive. The young female students who hailed from all over Luzon and enjoyed free education at the school were awed and mesmerized as they sat quietly and savored every note they heard.

At the open forum, many came up with interesting questions that ranged from how often one should listen to classical music; to how a listener should appreciate it; how a good attitude toward music should be developed.

One nun supervisor said the students showed keen interest as they were taking up music in their Music Arts and Physical Education class, in which classical music was often discussed.

The program host, Rosalie Caseria, perceptively summed up the main idea gathered from the questions: “One should listen to classical music to become a bright and smart student.”

She called the piano duo the “nation’s pride.”

Santamaria and Reyes have been holding the “Romantic Piano Concerto Journey” since 2001 as a way to bring classical music closer to the masses, whose artistic needs have been neglected.

They have performed in schools, institutions, medical centers, malls, parks, orphanages all over the country, and in some key cities in Asia and the United States.

To date, the duo has logged in at least 500 performances.

Santamaria said the journey had been most satisfying and exhilarating.

“To bring classical music to all kinds of people, especially those who could not afford to attend a formal classical concert, is truly gratifying,” she explained.

For sure, the piano-concerto tour will be missed, as listening to the