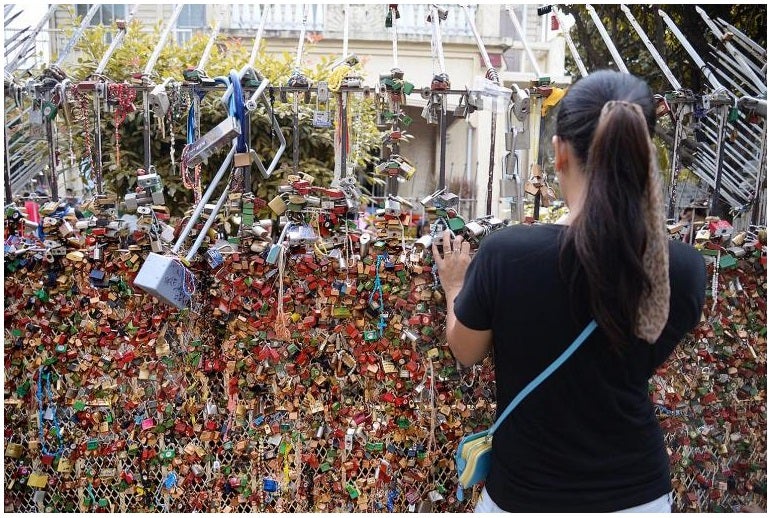 Loved-up couples in the Philippines have found a corner where they can seal their affection with brass locks – and God as their witness.

No one knows exactly who started it or when, but thousands of padlocks have been appearing since last year around a grotto inside a sprawling Catholic church in Baclaran district, just south of the capital Manila.

The association is unwieldy.

The grotto is a marker for St. Therese of Lisieux. She is patron saint of aviators, florists, illnesses and missions, not of romantic love or marriage. (Those are more St. Valentine’s purview). It doesn’t seem to matter that those flocking to the grotto are locking up with the wrong saint.

Church officials certainly don’t mind the misdirection. They have decided to keep the love locks, appropriating them as allegories for their homilies on marriage, and its lasting, binding nature.

“They’re there for a reason,” said Father Ino Cueto, the church rector.

The Philippines is at the tail-end of a phenomenon that is losing its sheen in many of the world’s love capitals, partly out of public safety concerns.

Last month, Paris removed close to a million padlocks, weighing some 45 tonnes, from its historic Pont des Arts, a pedestrian bridge across the Seine built by Napoleon.

Amorous tourists had been leaving locks on the bridge and throwing the keys into the Seine since 2008.

In New York in 2013, recreational lock pickers gathered half-way across the Brooklyn Bridge and began removing hundreds of locks, which they then attached to a public-art sculpture – a specially made “tree”.

In Venice, a campaign called Unlock Your Love is trying to discourage tourists from leaving their “garbage” on the Ponte dell’Accademia, spanning the Grand Canal.

The Guardian’s culture critic, Jonathan Jones, has bluntly referred to love locks as “the shallowest, stupidest, phoniest expressions of love ever devised”, while The Globe and Mail’s Sarah Hampson likened it to “a weird alien growth that just won’t die”.

“Far from being a local tradition, the locks are an imposition from strangers who somehow want to ‘own’ their moment in a foreign place – not unlike the hikers who stripped naked upon summiting a peak in Malaysia or the plethora of selfie-takers,” Hampson wrote.

But in the Philippines, the trend is likely to endure because of the population’s bottomless fondness for mawkish displays of affection.

The love locks also seem to have landed on a sweet spot in a nation where four in five are Catholics.

The meanings they represent – lifetime commitment, fidelity, monogamy – resonate well with the Catholic church in the Philippines.

Despite a wave of refreshing liberal thoughts sweeping the Catholic faith under the pontificate of Pope Francis, the Philippines remains a bastion of Catholic dogma.

It is the only nation on Earth, outside the Vatican, that outlaws divorce.

While the Vatican’s views on homosexuality and same-sex marriage have become more nuanced, Catholic leaders in the Philippines remain unequivocal.

“In Sodom and Gomorrah, there were same-sex activities, and God destroyed these cities in a hail or fire and brimstone,” Archbishop Emeritus Oscar Cruz, one of the Philippines’ most senior bishops, told Agence France-Presse.

“Even among animals, a union is between a male and a female. How can they (gays) possibly generate their own kind?”

At a gathering of Catholic lay leaders, Archbishop Socrates Villegas, head of the powerful Catholic Bishops Conference of the Philippines, called same-sex relationships “a tragic error of humanity”.

“(Same-sex union) is not a marriage. It is an agreement, a union, or call it whatever it is, but it is certainly not marriage,” he said.

For those making the pilgrimage to the love-lock grotto, the ritual has become an extension of their faith.

Indeed, the grotto has become a strange hybrid: a shrine, love fence and wishing well rolled into one.

People go there not just to profess their undying love to their partners, but also to offer a prayer to a saint they barely know, make a wish and then flick a coin onto a pond.

Albert Tagaso, 49, an overseas Filipino worker, clipped five padlocks: two for him and his wife, and three for his children.

“When you put a lock there, it’s a symbol that you’re giving yourself to God. You’re locking your faith to God,” he said.

Outside the church, merchants are busy cashing in.

Laid out on winnowing baskets and straw mats, with rosaries, pirated DVDs and other trinkets, are brass locks of varying sizes.

Baulo Sarip, 58, a Muslim who makes a living selling Catholic trinkets, said he makes about P500 (S$15) a day from these locks.

He used to make as much as 1,000 pesos, he said. But dozens of competitors have sprouted, and the grotto is filling up fast with locks.

“They’ll have to remove some of those locks eventually to make room for new ones. People will keep coming,” he said.

‘Locks of love’ bridge in Paris evacuated after railing collapse