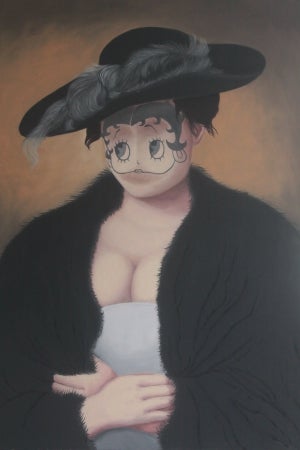 Nadonza and his blended artware

WHAT flights of imagination did Romilo Nadonza achieve by his exciting blend of humor and irreverence, passion and affection, seriousness and playfulness.

The title of the show is, of course, “Blended,” on view at the Mendez Big and Small Gallery. It is to this spirit of art-making that evokes the character of collage that allows Nadonza to conceive of visual images that have a touch of the surreal but anchored on the real. The idea of collage is, however, not of the cut-and-paste variety we are more familiar with but rather, of the process of osmosis, an absorption of existing images now pickled in a brine of contemporary attitude, brashness of youth, indifference to critical judgments and sheer visual adventurism.

Grist for the mill

Contemporary art has already treated Old Master works as mere grist-for-the mill, as evidenced by poor Mona Lisa, which has been regurgitated innumerable times, through countless transformations. Nadonza himself dips his brush into the pages of art history and comes up with a trio of masterworks emerging with a reconstituted personality.

First is a work by the French Neoclassical painter Jean-August-Dominique Ingres (1780-1867) with the title “Portrait of Countess D’Haussonvuille.” A noble lady in Ingres’ canvas, she is now, in Nadonza’s handiwork, a make-over revelation, her arms riddled with a profusion of tattoos, such as sported by present-day bohemians. The sight is at once provocative and endearing. The decorative tattoos dovetail and comfortably into contemporary life. The dainty countess is still the lady of rank but now evinces a more daring character.

“The prince of painters and the painter of princes” is how the Flemish painter Peter Paul Rubens is described, truly one of the supreme geniuses of painting. But for Nadonza, Rubens is no sacred cow. He has thus courted Rubens’ “Portrait of Susanna Fourment,” and transformed her into a contemporary Betty Boop. Perhaps not much known to the youngsters now, Betty Boop is an animated cartoon character in American media, and a caricature of the 1920s Jazz age flapper. Nadonza conflates the distinctive features of Betty Boop (“a large baby face with big eyes and a nose like a button”) with the innocent and guileless appearance of Rubens’ model. Such familiar beauties, like heiresses to Mona Lisa’s charm, are easy foils for Nadonza’s sardonic approach to art.

Interestingly, Nadonza has chosen a piece of sculpture: Constantine Brancusi’s limestone schematic sculpture “The Kiss” instead of Rodin’s more erotically charged sculpture of the same subject. (Brancusi once apprenticed to the master Rodin, and wisely decided to veer as far away from the master’s realistic style.) Nadonza liberates the work from sculpture’s pedestal-bound notion and sets it off, like a flying kiss, out into space.

As if to echo Brancusi’s kissing lovers, Nadonza interweaves into his art the sight of two monkeys kissing. An affectionate gesture of buffoonery and a simian valentine to “Love,” the work mocks and canonizes the human predilection for the merging of lips as a foreplay to the act of love.

But for a volcanic and chest-heaving valedictory to love, Nadonza pulls out all the stops in “Wild Hearts.” It is a blazing serial imagery of the symbolic heart-shape as well as its realistic rendering of a palpitating organ freshly torn from the body, metaphorically transformed into roses and skulls.

In bleeding shades of cadmium and cardinal reds, the canvas is electric in its stance as a paean to love, bearing witness to the passion that can so thrillingly engross Nadonza. To be sure, “Wild Hearts” will strike some as a tad too flamboyant, but it speaks a truth about the subject of love which the viewer will not fail to feel.

As a young artist starting out on a life-long journey to art, there is of course no telling which direction the muses’ winds will blow. But if this solo show is any indication, Romilo Nadonza seems to have found the right blend of alchemy for his art.