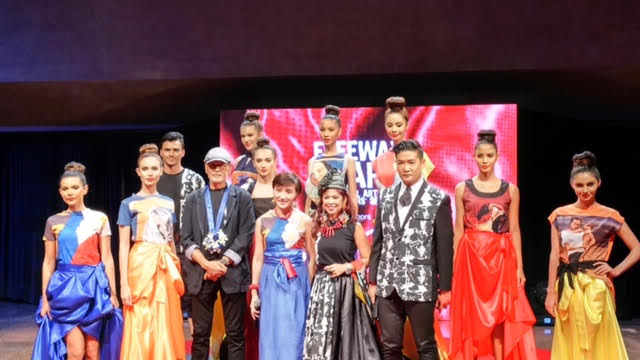 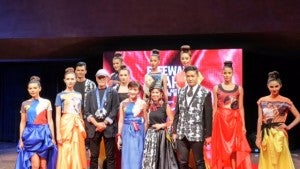 FOR HIS celebration of his 50th year as a professional artist, National Artist Benedicto “BenCab” Cabrera is only halfway through a schedule that has taken his works outside the studio and into theater and fashion.

BenCab is the 13th in the series, which began in 2009 when Freeway launched a collection honoring Nick Joaquin,   National Artist for Literature.

Elite Garments (Freeway, Ensembles, Solo) CEO Sheree Gotuaco attributed the National Artist Collectors’ Series’ success to how it had been able to show the art, literature and talent of Philippine National Artists in a very relevant, creative and affordable manner.

“The interesting interpretation of the works as well as the wearable designs make them conversation pieces or ideal gift items to friends and families abroad,” said Gotuaco. “We have many diplomats and balikbayan appreciating our line. They are able to keep and wear a piece of priceless history for a fraction of its value. This makes them come back for more time after time. There is always something new.”

“Because we have done our tribute at a high level, it becomes a hard concept to copy,” Gotuaco explained. “We are grateful that we have built a good reputation among established institutions such as museums, government institutions, universities, art collectors and foundations. Their valued support has helped make all our tributes successful, and largely because they believe in our goal of promoting Philippine art and culture.”

Around this time last year, Gotuaco received a call from the BenCab Art Foundation for a possible collaboration.

A couple of meetings later, including a visit to the BenCab Museum in Baguio, the collection finally came to fruition.

BenCab, Gotuaco said, would point out some artworks of his that he thought would look good on clothes, something they took into consideration, and balancing the development with how it would be interpreted on the silhouette, the technology required for the type of fabric, and the market’s acceptability of the subject image.

Working with the artist, Gotuaco said, was an interesting experience.

“For his rock-star status, he is quite a reserved person,”

Gotuaco said. “When we showed him our initial studies of the collection, he pointed out which styles he liked. He saw that we repeatedly used only a number of his works on many different styles, and he wanted us to use more of his works to showcase his 50 years as an artist, so we are very grateful that he gave us access to more of his works.”

Fittingly the collaboration has resulted in some 50 pieces for the Freeway X BenCab collection, unveiled during a recent fashion show hosted by Tessa Prieto-Valdes at the main lobby of the Cultural Center of the Philippines.

Vibrant colored shift dresses, work dresses, sublimation tops, maxi dress, jumpsuit, kimonos, accessories and even shirts for men, with quality materials such as woven fabrics, soft materials like georgettes, thick knits and comfy soft knits make up the Freeway X BenCab collection, all of which are available at all Freeway and The Row branches nationwide and online through www.freewayonline.com.ph and Zalora.

Winners of this year’s Art Bag Design Contest were also presented at the event.

Merry Joyce Bautista (“Taong Putik Festival”) and Mark Dizon (“Ating Pilipinas”) got to share the stage with BenCab, who handed them their prizes.

As BenCab crossed out the fashion launch from his schedule and looked forward to the coming years, he had but one thing to say when asked if there was anything he still wanted to achieve: “Yeah, as long as you’re creative, it goes on.”