Spaghetti-throwing, mobile parties, razzing the teacher —‘We were the freedom batch, graduates of ‘86’ | Lifestyle.INQ ❮ ❯ 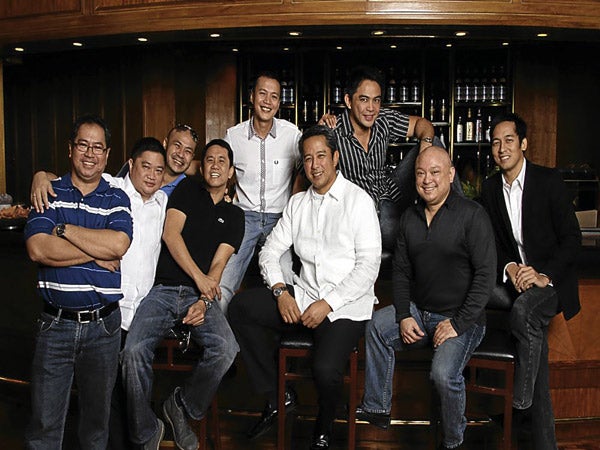 Spaghetti-throwing, mobile parties, razzing the teacher —‘We were the freedom batch, graduates of ‘86’

Their teachers cursed them, saying they’d never amount to anything.

Ateneo High School Class 4E batch ‘86 was raunchy but harmless. Blame it on hyperactive adolescent testosterones. Everyday was like a scene from “Iskul Bukol” meets “National Lampoon.”  Before the era of iPhones, BBs and other techno-toys, the students had only their unbridled imaginations and lack of inhibitions.

Like, it was a classroom signature to see a ball of chewing gum tangled with pubic hair stuck on their desks.

“Instead of a vase, that would be our decor,” says PJ Exconde.

One day, a teacher parked his Harabas behind the classroom. On a whim, the boys pushed the car while Paul Generoso took the wheel. The teacher caught them and, needless to say, hurled invectives. Generoso was charged as an offense pusher.

Once, the boys came from a Christmas party and were on their way to back to school on a bus, bringing their food. Like a scene from a slapstick comedy, they started throwing sandwiches and spaghetti at each other, including their teacher in religion (who later became the head of Napocor).

The teachers always sent them out of the classroom for being naughty. Twenty-five years later, they have evolved, said the participants at a table discussion at the Captain’s Bar at the Mandarin Hotel.

Jose Gaudencio “Den” Abesamis was the quiet one in class until he bloomed into a commercial model and was an executive for several luxury brands in New York. He is now helping in the family business as director of Operations & Special Projects in Clinicomed.

Alexander “Alex” Panlilio is the Vice President of the consumer health division in Unilab. John Enrico “Joen” Mortel is a painter.  Robert “Robbie” Guevarra is a stage actor, director, producer.

To mark their silver jubilee, Class 4E will hold the first Governor Juanito Victor C. Remulla Invitational Cup at Eagle Ridge Golf and Country Club in General Trias, Cavite on Nov. 5, at 8 a.m. It aims to raise funds for the education of priests under the Governor’s Scholarship Funds; help in the improvement of the Ateneo High School facilities and provide medical assistant to a classmate, a stroke victim.

The event is supported by their friends, naturally—Meralco, Coca Cola, McDonald’s and Unilab.

ROBBIE: Oh dear, do you really want to know? I had these p__k-p_k shorts. Really skimpy shorts that I had no qualms about wearing to school. They were running shorts with side slashes.

ALEX: You heard his voice onstage, right? Imagine inside a small classroom, he’s screaming his lungs out because he’s having cramps. We thought someone was being castrated. What’s going on with Robbie? He’s on the floor with red shorts. Before we could attend to him, the first thing we noticed were the red shorts. So nobody wanted to touch him.

ROBBIE: We never teased, mocked or crucified anybody.

ALEX: They had their cliques. Our group was into sports.  Somehow buo pa rin kami kahit iba-iba kaming characters. No judgment. I’ve been in restrooms where the gays got harassed by other batchmates.  Our class was relaxed about it.

ROBBIE: That was the time when the term bakla was derogatory.

PJ: No matter how others tried to keep it, our straight classmates could tell. But they didn’t do anything to harass or insult us. We were always included in the fun.

ALEX: The Edsa Revolution happened during our fourth year. Some of us were getting involved in politics—joining the rallies. But it was affecting some of the activities of our batch like the prom.

ROBBIE: We didn’t have a graduation ball, but we also had no term paper in English. Because of the weeks of suspended classes, there was no time anymore.

ALEX: Our basketball team won in the UAAP. We were supposed to compete in the nationals but because of the situation, the parents would not let us go to Cagayan to compete. On the one hand, you wanted to be involved with what was happening, but on the other, there were some things that were important to you that had to be given up.

What activities in the ‘80s made high school so memorable?

ALEX: Mobile parties. Our friends had a business of bringing in the lights and sounds to the venue. They mixed for the whole evening.

ROBBIE: In the ‘80s, we had those “party ng bayan.” Somebody would host a party and everybody was invited whether you knew the host or not… They were held in the Corinthian Clubhouse until the homeowners complained.

ALEX: He was calling us to untie him.

ROBBIE: Remember TV Pow? It was a show where there was a video game on screen. The host would call any household. If you’re a contestant and won the video game, you would have a prize. There’s a hit that goes across the screen with a target. When it hits the center, you shout, ‘Pow!’ If you shoot down three times in succession, you win. We would do it in school. We drew a target—a teacher who passed by.

For all the naughtiness, did you learn anything, gain anything?

JOEN: You don’t learn everything in life in the confines of the classroom. Moral growth. Kasi yung kalokohan na iyon, lesson na rin for my kids. I would know ang mga kalokohan ng mga bata because naglokoko din ako.

PJ:  We were privileged but socially aware. My Ateneo education taught me to adjust, not to look down and judge other people.

ALEX: We had a program called Tulong Dunong where we taught underprivileged communities. We went to Malanday once a week to teach. When we were were about to graduate, one of the kids came to me with a handmade wallet. Nilagyan niya ng peso. Nandoon ang pangalan ko. Inimbita niya ako so bahay. We had Coke and crackers. First, you saw the social differences and realized how fortunate you were. You’re touched.

JONVIC: We were the freedom batch, graduates of ‘86. We delighted in rebelling against authority in petty ways. But I had a difficult time. My father (former Cavite Governer Juanito “Johnny” Remulla Sr.) was a Marcos man and that was the height of the Yellow Fever. I would go to school in a Marcos shirt and everyone was in Cory Fever. The great thing about my class was tolerance, even though I had inherited my political views. I didn’t take it against them that they were for Cory. They didn’t take it against me that I was not a Yellow.

How did the unorthodox culture of the class prepare your for life?

ARIEL: I’ve always been maloko and boisterous. The Ateneo Jesuit education of being a man for others and respecting others’ beliefs helped me in facing up to life’s challenges.

JOEN: Our classmates came from all walks of life—mahirap, mayaman, tarandatado, gago. I was inspired by all of them.

ALEX:  I studied in the States and felt discrimination as I was one of the few Pinoys in school. When I came back, I had my guard up. After knowing my classmates, I realized what true friendship was. They say high school friends are your lifetime friends. I needed to trust. I didn’t see Raffy for a long time, but as the saying goes, when you see a true friend, nothing has changed. He may have lost his hair, but the girls are still coming.

PAUL: When you’re with people for business, malungkot.  When I’m in Davao and I wake up early in the morning or I’d be in an elevator in General Santos, I would send freak messages to these guys because they know who I am. We’ve been together through thick and thin.

JONVIC: If somebody would pick on PJ,  pupuntahan namin and we make sure to settle the score.

PJ:  There’s the Ateneo sense of humor that keeps things balanced. We find humor in things others don’t perceive as funny.