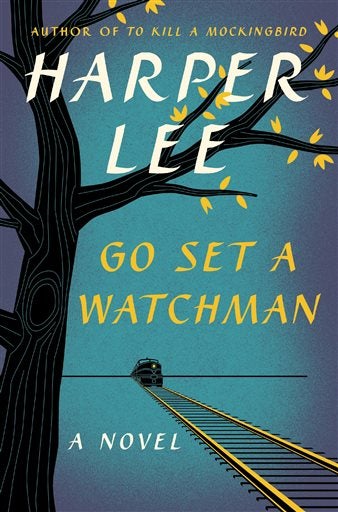 This book cover released by Harper shows "Go Set A Watchman," a follow-up to Harper Lee's "To Kill A Mockingbird." Sales dropped sharply for Harper Lees Go Set a Watchman in its second week of publication but it remained the best-selling book in the country for the week ending July 26, according to Nielsen BookScan. On Wednesday, July 29, 2015, Nielsen reported sales of 220,000 for Watchman, less than a third of Nielsens total for the novels first week on sale. (AP Photo/Harper)

NEW YORK — Sales dropped sharply for Harper Lee’s “Go Set a Watchman” in its second week of publication. But it remained the best-selling book in the country for the week ending July 26, according to Nielsen BookScan.

On Wednesday, Nielsen reported sales of 220,000 for “Watchman,” less than a third of Nielsen’s total for the novel’s first week on sale. Nielsen tracks around 85 percent of the print market, and does not include e-book sales.

Publisher HarperCollins announced last week that “Watchman,” panned by many critics, had already sold around 1.1 million copies in North American alone. The total includes e-books, audiobooks and pre-orders for “Watchman,” which topped best-seller lists soon after HarperCollins revealed in February that a second novel was coming from the author of “To Kill a Mockingbird.”