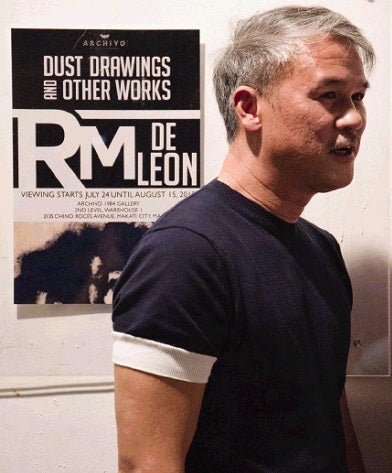 RM DE LEON is one of our more irreverent postmodernist painters. He is noted for appropriating pop-cultural images, retouching them, sometimes even obliterating them, in an ironic deconstructivist twist.

Collectors, admirers or simply the curious flocked to the opening of his latest show, “Dust Drawings and Other Works,” in Archivo 1984 Gallery, L/2, Warehouse 1, 2135 Chino Roces Ave., Makati City (next to King’s Court).

These are mostly untitled mixed-media pieces: 83 in acrylic and ink on paper; four in oil and acrylic on canvas.

The show is a kind of survey of his life’s work (not yet a retrospective)—as it displays pieces from his early period, when he was still under the mentorship of the late conceptual artist Roberto Chabet at the University of the Philippines College of Fine Arts in the early 1980s, to his latest drawings of inchoate images that came to him at night.

Dominating the hall are four large-scale paintings in oil and acrylic on canvas—“The King,” “The Queen,” “The Battleship” and “The Guard”— all abstraction in black and white composed of what look like jagged jigsaw-puzzle pieces. They are characteristic of his technique of flat application and layering of paint.

On the mezzanine are some of his tweaking of found images. Typical is the blue laughing Valentina, the snake-haired character he has taken from the komiks, then embellished with bees, dragonflies, foliage and splattering.

Here are images appropriated from book and magazine illustrations, done in flat blue, green, yellow, red, brown, burnt orange, slate gray: profile of a woman with a picnic basket; eight women drowning in a flood while armed men look on; a pair of legs with stiletto shoes.

There may not be any social commentary here, just some subtle statement about kitsch.

The main gallery is scattered with De Leon’s latest work, “All We Are Is Dust in the Wind”—a series of line drawings in ink on paper highlighted by flat acrylic touches of red, blue, black, pink, mocha, burnt sienna, ochre.

The imagery here may look like automatism or doodling but it is not. This is quasi-abstraction with hints of figuration.

It appears to be one more plane in De Leon’s creative evolution, beyond Warhol, Rosenquist, or Lichtenstein.