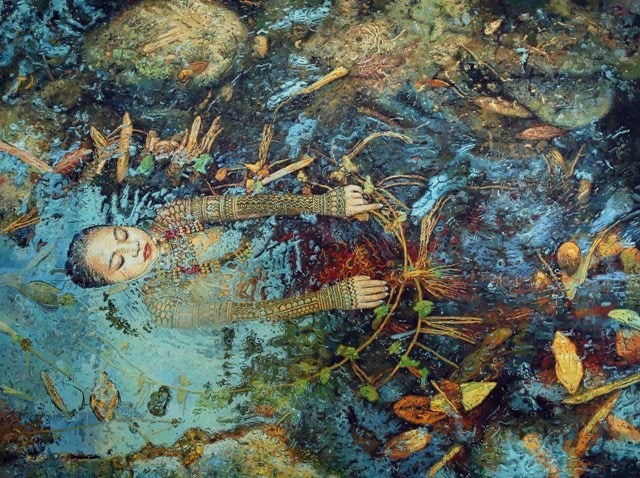 Completed in 1852, the painting depicts the character of Ophelia from Shakespeare’s “Hamlet” singing as she drowns in a river. The painting is remarkable because of the strikingly haunting visual aesthetic.

Millais’ Ophelia is a beautiful maiden surrounded by the detailed flora of the woodlands. But what is more striking is the symbolism Millais employs—of mankind’s once close relationship with nature as drowning.

Carrying the same spirit is Jef Cablog’s “Downstream,” in his second solo exhibit “Coexistence.” Like “Ophelia,” Cablog’s large 72” x 96” canvas work is exquisitely rendered. Cablog’s favored technique is the use of a palette knife, lending texture to a skillfully realist painting.

There is also the hint of a folk story, culled from Cablog’s background as an artist raised in the Cordilleras. But the most conspicuous similarity of “Ophelia” and “Downstream” is their depiction of the tragedy of nature.

Cablog, who studied Fine Arts at University of the Philippines, repeatedly uses motifs of flora, leaves, trees, rivers, creeks, rocks and mountains as an enduring reminder of the beauty of nature.

He entices his audience to look at the Cordillera of his childhood, spent in the small mountain-town of Barlig, climbing its mossy trees, collecting wild berries with other village children, swimming and fishing on its creeks, streams and rivers.

“Coexistence” is Cablog’s   warning as nature drowns—a song that remembers his ancestors’ coexistence with nature and laments its severed links caused by progress and development.

Running in the same venue until Aug. 5 is “Four @ Play,” featuring Saturday Group stalwarts Migs Villanueva, Omi Reyes, Anna de Leon and Roel Obemio collaborating, interacting, and even playing with each other, with separate and conjoined works that are far from what you find in your typical group exhibition.

The collaborative works are not “forced,” rather they blend seamlessly into each other in unique testimony to the concept of trust, respect, and balance.