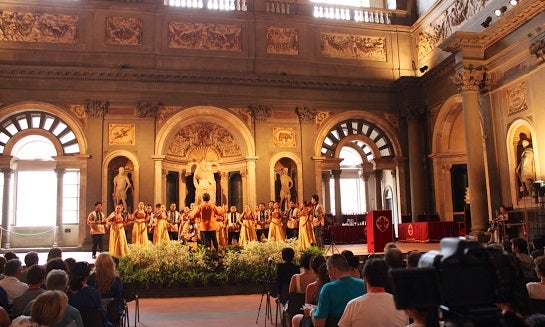 THE UST Singers in action

THE UNIVERSITY of Santo Tomas (UST) Singers, under the baton of its founder Fidel Gener Calalang Jr., won the Grand Prize, the Golden David trophy, for Best Choir of the Florence International Choral Competition in Italy July 22-24.

The UST Singers swept the competition as it also won the First Prize in all four categories—Sacred Music; Mixed Choir; Modern and Contemporary Music; and Pop, Folk, Gospel and Barbershop.

Calalang was also awarded two special prizes: Best Interpretation of the contest piece, “Vergine O Natura” “by Gaetano Lorandi; and Best Contemporary Composer’s Arrangement, for his choral arrangement for solo and choir of “My Heart and I” by Ennio Morricone.

“We studied ‘Gabag-an’ just last June. I did not expect this award because my solo part only lasted a couple of seconds in the introduction of the song,” the Varsitarian, UST’s official student paper, quoted Tagalog as saying.

The paper said the baritone was an alumnus of the UST College of Science.

The jury was composed of seven choral experts from Italy, Japan and the Netherlands.

The UST Singers was founded in 1992 by Calalang, a faculty member of the UST Conservatory of Music. The choir is composed of students and alumni from different UST colleges.

The UST Singers is the only choir to have won twice—in 1995 and 2010—the Pavarotti Prize, or Choir of the World, title from the Llangollen International Musical Eisteddfod in Wales, United Kingdom, one of the world’s oldest and most prestigious choral festivals.

The UST Singers is on its 28th international concert tour covering European countries.