Nay to ‘Yey,’ but can Beast ever go wrong? | Inquirer Lifestyle ❮ ❯ 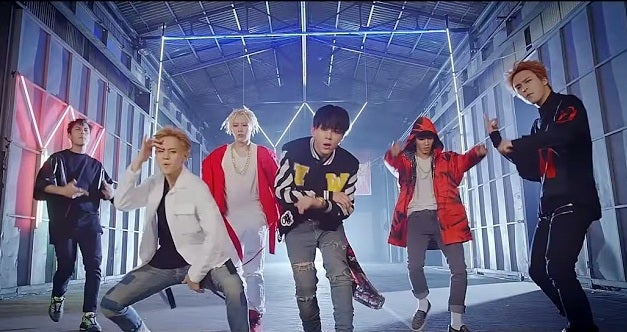 MUSIC video of "Yey" shows Beast sousing up on the way to a hangover.

Nay to ‘Yey,’ but can Beast ever go wrong?

HAVING been introduced to Beast last year via its very unforgettable and still very current single and music video “Good Luck,” this writer welcomed the news the top Korean pop (K-Pop) “idol” group would be back with its eighth mini-album “Ordinary,” and the carrier single “Yey” would be a “refreshing electronic pop dance (EDM) number.”

“Good Luck’ showed touches of EDM, so for Beast to go all-out in the genre was exciting news.

But “Yey” doesn’t quite live up to the hype.

As with “Good Luck,” “Yey” starts with a very solid verse that gradually builds up to what sounds like a very promising payoff in the chorus that you can’t wait to dance and sing over and over again.

Imagine being at a live Beast performance and you are hearing “Yey” for the first time. The moment it gets to “Everybody stand up,” you do just that and expect something as amazing as what “Good Luck” or even “Shock” and “Breathe” delivered.

But you suddenly get hit by something generic-sounding—at least by Beast standards—that it confuses you.

There is reason why Billboard named “Good Luck” the No. 1 K-Pop song of 2014. It seamlessly fused EDM with classical elements, including tense piano riffs and dramatic orchestral strings, bringing with it a fresher-sounding Beast that is obviously willing to take musical risks, and effectively making a statement that the group is not only here to stay but they are taking over.

With “Yey,” however, the risk-taking may alienate casual fans.

But because Beast’s diehard fans will always be strong, being some of the most loyal in the world of K-Pop, “Yey” and the accompanying music video will not lose a single B2uty (or Beauty, as a devoted fan of the band is known).

The video shows each Beast member waking up in the most unusual places after a night of partying. Much like in the film “Hangover,” they are trying to piece the memories of the previous night’s revelry, which must all have been a blur to them.

Doojoon is in a bathtub on a rooftop; Junhyung is sitting on a water tank; Kikwang is in a red convertible; and as to why Hyunseung wakes up on a pile of trash bags in an alley is open to anyone’s interpretation.

But though the song lacks the usual oomph of Beast’s songs, the video’s payoff—for the ladies, at least—should be the part where Yoseob and Kikwang show off their physique, the latter even ripping off his shirt, which should draw more fans to the group.

When the audio teaser for “Ordinary” was released online, “Yey” was one of the better-received songs, but the chorus wasn’t sampled at the time.

Personally, track No. 5 “Take It,” provided Beast comes out with a sleek video to match its vibe, seems to have more of a potential to be a sleeper hit.

Nevertheless, as far as fans are concerned, the sextet can never go wrong, something the group probably knows by now. It’s ok for it to continue experimenting as Beast is in a unique position to continue dominating for the next couple of years.

But perhaps the warning here is that it should not veer off too much from its signature—hard-driving but still melodious sound, and lyrics that are poetic, striking and heartfelt—because too much adventure may leave its regular audience behind.

It’s always going to be a struggle to maintain momentum, especially when you’ve had it as good as Beast has had in recent years. Beast has not been named by critics as the most consistent K-Pop act for nothing.

Often compared with the more senior Big Bang, Beast is noted for its vibrant recordings and powerful stage performances.

Consistency is the name of the game. Going by Beast’s track record, it will consolidate its strengths and even expand its huge following. Witness its expanding international fan base as shown when Beast comes to town and hysterical fans greet them at the airports and pack their concerts.