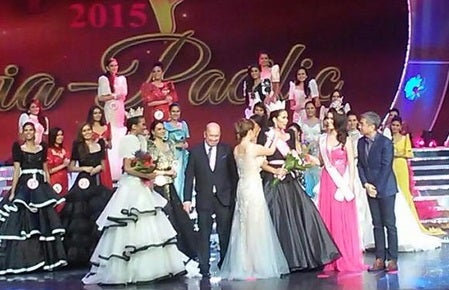 Homegrown candidates scored an upset at the 2015 Mutya ng Pilipinas pageant as three of the four top honors went to Philippine-based candidates even as the semifinal round was dominated by representatives from overseas Filipino communities.

Julee Ann Marie Bourgoin from Cagayan de Oro City and Brenna Cassandra Gamboa from Nuev a Ecija made it a three-point shot for the homegrown candidates as they took home first and second runners-up honors, respectively.

Janela Joy Cuaton from the Filipino community in Doha, Qatar, was the lone overseas-based bet to crack the winners’ circle and bagged the Mutya ng Pilipinas-Tourism International crown.

Bautista’s title came with a P150,000 prize money, while Cuaton’s crown made her P120,000 richer.  Each of them also took home a royal brooch from the pageant’s official jewelry provider Hoseki, unlimited flights for one year to any destination of their choice from SkyJet Airlines, a two-year management contract with Viva Communications, plus products and services from official makeup provider Inglot Philippines, Zanea Shoes, Hana Shampoo,  Lee Cooper Jeans, Mags Clothing and Robinsons Malls.

Bautista received the title from last year’s winner Eva Psychee Patalinjug. She will represent the country
in the Miss Tourism Queen of the Year International in Kuala Lumpur on Dec. 9. Cuaton will compete in the Miss Tourism International pageant in Vietnam on Nov. 28 and try to continue the Philippines’ winning streak sustained by her predecessor Glenifer Perido.

The two queens’ victories did not come as a surprise, as they received the heaviest support from the audience. Both Bautista and Cuaton also took home the lion’s share of special titles awarded in preliminary competitions and during the finals night.

Since 2000, Mutya ng Pilipinas has recognized the lineage and ancestry of Filipino women living abroad and accepted them to the national competition. During the earlier years since the move has been implemented, several overseas-based contestants have won. But the homegrown bets stepped up their game and clinched the titles in recent editions.

For her part, Cuaton was asked: “Should you have a daughter in the future, would you encourage her to join a beauty pageant?”

She said she would, “because with beauty pageants, we can show people our advocacies in life, how to gain respect. I know that she can help people be better someday.”

When asked what sets Filipino women apart, Gamboa said “all around the world Filipinas are loved because we are caring, driven and hard-working.”

The 2015 Mutya ng Pilipinas coronation night was telecast on ABS-CBN and will be beamed to countries covered by The Filipino Channel.

The Philippine Daily Inquirer is a media partner of the 2015 Mutya ng Pilipinas pageant.