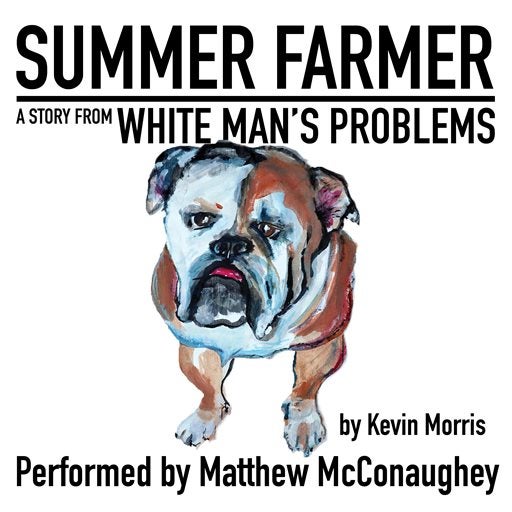 The Oscar-winner is one of several celebrities to narrate Kevin Morris’ audiobook version of “White Man’s Problems” from Audible Inc. It’s a series of short stories centered on men of various ages uneasily trying to figure out life’s conundrums.

“Kevin’s been a friend and consigliere of mine for over 20 years,” McConaughey wrote in an email message. “I’ve always enjoyed his outlook and authenticities of where he’s from and wants to go.”

McConaughey narrates the first short story, the 18-minute “Summer Farmer,” which is about the brief meeting of a wealthy man and an elevator repairman. It was inspired by John Cheever’s “The Summer Farmer” and is being released by Audible free on Aug. 4. The full audiobook is available on Aug. 11.

“White Man’s Problems” will also have stories read by “South Park” creators Trey Parker and Matt Stone, John C. McGinley, Josh Holloway, Pete Yorn, Minnie Driver and Sarah Polley. All are either clients or friends of Morris, an entertainment attorney who also co-produced “The Book of Mormon.” Morris narrates the last story “White Man’s Problems,” which features “the biggest jerk you’ve ever seen. So I knew I’d probably save him for me and not make anybody else go through it,” he said.

McConaughey , the actor of such films as “Dallas Buyers Club” and “Interstellar,” said it wasn’t such a stretch to become a narrator. “Storytelling’s what I do for a living as an actor and just like an actor, if the scripts good, I don’t have to do as much ‘acting’ per se,” he wrote. “Kevin’s stories have clear identities and sense of place.”

Morris began writing five years ago in an apartment he converted into an office in Santa Monica, California. He wrote three days a week, inspired to write nine short stories from J. D. Salinger’s “Nine Stories.”

The fourth story soon grew long enough to be a novel — “I learned firsthand the difference between a novel and a short story,” Morris said — but he was unable to get anyone to publish it.

So he returned to the short stories and published it himself on Amazon. A friend’s drawing of a dog adorns the cover. Grove/Atlantic president and publisher Morgan Entrekin read it and made an offer on the novel.