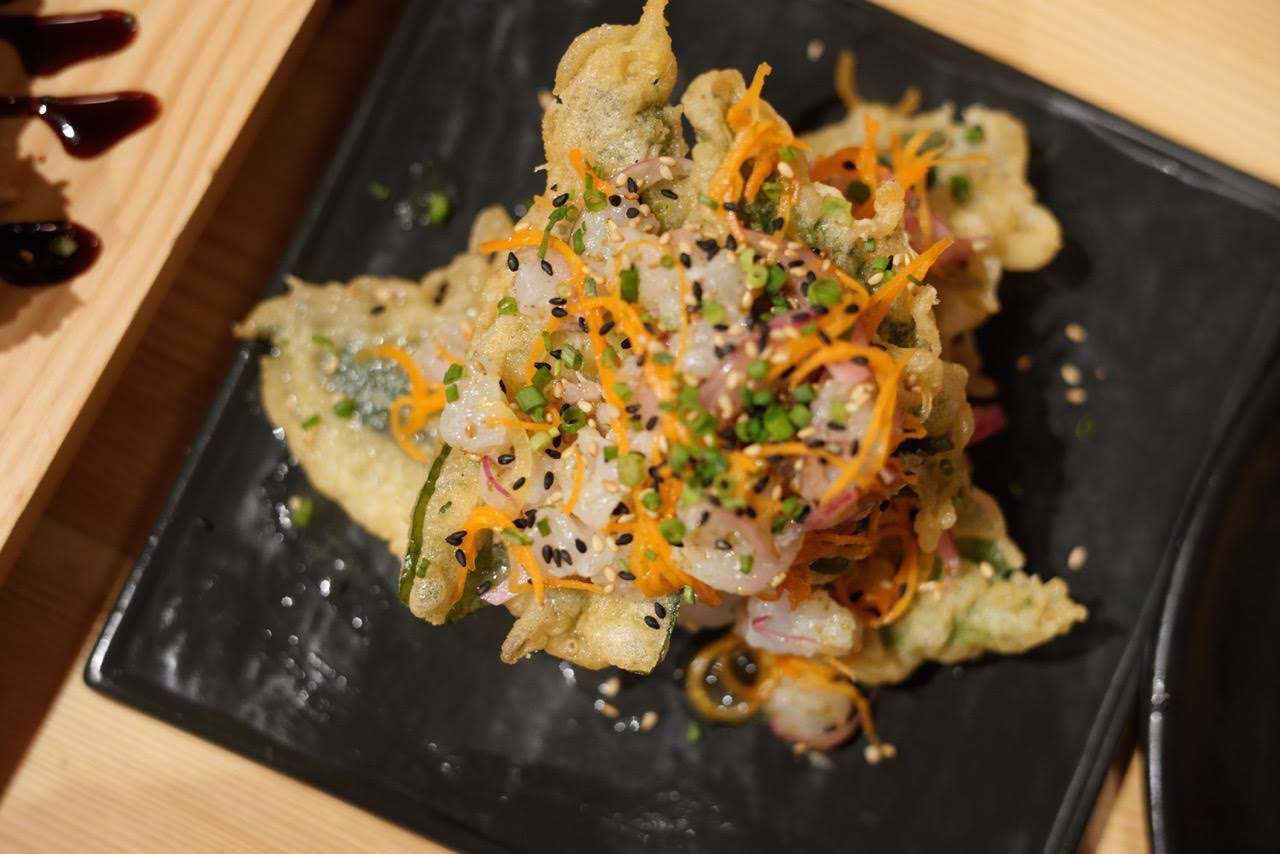 It would be  easy to dismiss Ooma as the easy-listening version of the upscale, notoriously difficult-to-book Mecha Uma in Bonifacio Global City, where Bruce Ricketts holds his chef’s table and performs a juggling feat of a degustation with complex ingredients.

Located in the new Fashion Hall wing of SM Megamall, Ooma is an offshoot restaurant that has leveraged Ricketts’ popularity into a more accessible concept and venue.

Despite its name that sounds like an app from a Silicon Valley startup and a tagline (“Japanese Rice Bar”) that doesn’t explain much and feels more like a vestigial placeholder than anything else, Ooma has been getting good press and drawing a line of diners out front. The queue, however, goes fairly quickly; we were able to get a table in 30 minutes on a weekend afternoon.

I had just dined at Mecha Uma recently and asked Ricketts on what he was up to at Ooma and how well it would function without him—since Mecha Uma is so tied up with his personality and presence.
“Easy to like dishes, simpler flavors,” he said.

On my visits to Mecha Uma there had been at least one table of diners who did not quite grasp the idea of the inventive, chef-led degustation that they were walking into, and were trying to order tempura and gyudon, and were not happy being served small portions of unfamiliar flavors.

Those people, as well any fan of Ricketts’ ideas at less lofty prices, plus anyone who just wants a good meal of big, hearty flavors with a Japanese twist, should make a beeline for Ooma. Here you will find both tempura and gyudon, though will a little twist; and also “small plates” (actually quite big) of interesting riffs on the mainstays of local Japanese restaurants: maki rolls, tataki (minced sashimi), and aburi (blowtorch-singed sushi).

It’s best to follow the waitstaff’s recommendations or look at the pictures, because the names don’t correspond to what you’ll find in other Japanese restaurants.

For instance, the Uma Viche, which has minced grouper, pickled onions, and a citric dressing balanced delicately (a bit too delicately; I lost my topping when I bit into it) on a fried kangkong leaf, would be my idea of a tataki interpretation. However, the tataki is the closest you’ll get in Ooma to a classic sashimi—the fish comes mixed with pickles and vegetables.

The aburi, meanwhile, doesn’t come in the nigiri form, in which the rice is topped with the seafood, which would normally provide more surface to be cooked by the blowtorch, but in the makizushi, or rolled form.

The scallop and tuna aburi was our favorite, though beware the blast from the spicy mayonnaise dressing.

The taco-maki, actually not rolled rice but “open-faced,” has the nori fried until crisp and the filling piled high on it. This is best eaten in one big bite.

To give credit where it’s due, Romy Dorotan of Purple Yam has been doing a “noritaco,” which is almost exactly the same thing, for many years at his restaurants.

For the kids we ordered the Tori Kara-Age, chicken bits in sweet sauce with sweet potato wisps for added crunch. The meal comes with unlimited free Japanese rice. If I work in the area I could see myself coming to Ooma every day for lunch and having one of the cheaper hot dishes, and filling up on rice. But then I would probably end up ordering an aburi-maki. Or the hanger steak.

It was somewhat anticlimactic to come home to our Sunday evening leftovers dinner, with our palates still craving exuberance and having only microwaved remains of the day to slake the hunger. Since we had some leftover baked salmon, I tried to channel Ricketts and did a drizzle of teriyaki sauce, wrapped the salmon in nori with some sushi rice, then squirted some Kewpie mayonnaise mixed with Sriracha.

My daughter gave me a you-gotta-be-kidding look and ate plain rice
instead. My wife quietly heated some other leftovers.

The taste-palette that one remembers from Ooma is that combination of creamy, spicy, acidic-fermented, with a bit of sweetness from unagi sauce or teriyaki that Pinoy love. But it isn’t just a haphazard mix of these flavors, and there are at least some half dozen steps that the menu isn’t telling you about.

But with these prices, there isn’t any reason for you to muck about at home rather than patiently get in line for a seat. This may be the only Moment Group restaurant where I’ve not had to put in a gripe about the prices or the portion size; everything is surprisingly affordable and good value for money.

I have another chef friend who thinks of the successive menus that he creates for his restaurant as new album releases from a band, which is, I think, a brilliant metaphor for the creative journey of a chef and his team and the artistic journey they traverse.

Ooma isn’t Mecha Uma “remixed” or featuring Nicki Minaj. It’s another band with the same lead singer. It’s pop, but like the best pop, it satisfies.