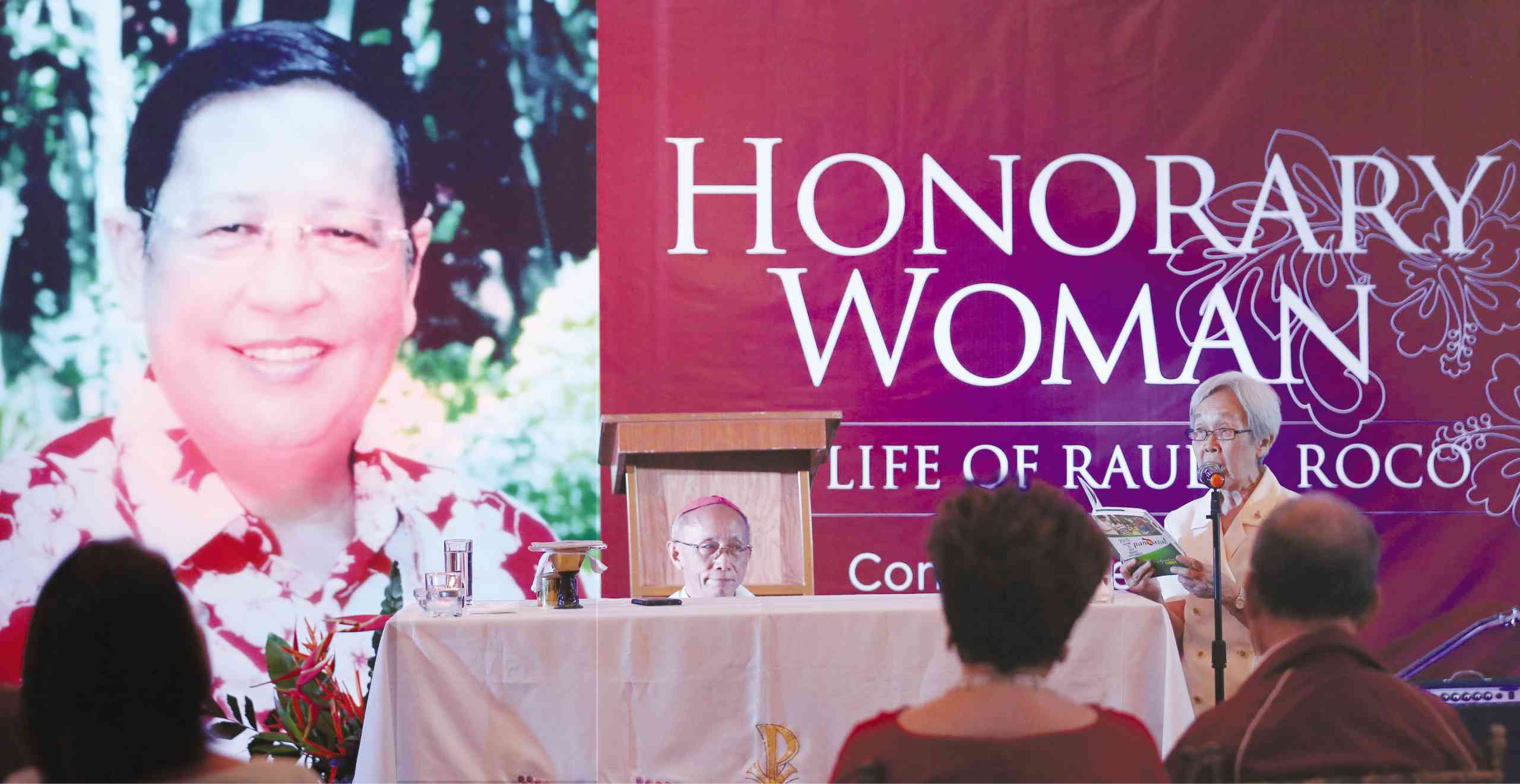 ONCE UPON A TIME Hailed widely for championing women’s rights, the late Sen. Raul Roco becomes the subject of tributes anew during the launch on Wednesday of his biography, “Honorary Woman: The Life of Raul S. Roco,” written by Inquirer columnist Conrad de Quiros. LYN RILLON

A poignant hush fell over the crowd when Inquirer columnist Conrado de Quiros was wheeled into the room during the launch of De Quiros’ biography of the late Sen. Raul Roco, his friend of many years.

It was the first public appearance of the esteemed and widely read commentator since he suffered a stroke last year.

Roco was still alive when De Quiros finished the book, a collection of vignettes about the life of an “honorary woman” and the “best President the Philippines never had,” in 2003.

But the manuscript never saw the light of day after Roco, constitutional convention delegate, congressman, senator, education secretary and presidential candidate, died in 2005. For years, it gathered dust on the shelves of writer Marily Orosa, who had commissioned the book, said Roco’s widow, Sonia Roco.

Last November, Sonia said she got a text message from the writer and scholar, Isagani Cruz, saying that Orosa had found the De Quiros manuscript among her files.

“I was stunned, then pleasantly surprised,” Sonia wrote in her prologue to the book.

On Aug. 5, exactly 10 years after Roco’s death, the 255-page “Honorary Woman: The Life of Raul S. Roco” was formally unveiled in a gathering of old friends at Kalayaan Hall of Club Filipino in San Juan.

The title derives from the recognition given to Roco by women’s groups for authoring and supporting a number of prowomen legislation during his years as a lawmaker, including the Women in Nation Building Act and the antisexual harassment law.

Accompanied by family, including his daughter Miranda de Quiros of ABS-CBN, and brother Emilio de Quiros, president and chief executive officer of the Social Security System, De Quiros was warmly received by the Roco family.

“Have you seen [the book]?” Sonia asked De Quiros, clasping his hand in both of hers. He smiled, shaking his head.

She handed him a copy and turned the pages to where a black-and-white photograph of Roco with De Quiros and other friends was featured. “Look, here are pictures of you,” Sonia said.

With his shock of white hair, De Quiros looked frail but was in otherwise high spirits. He spoke in the softest whisper as he received the greetings of friends and fans.

“This is your book,” Sonia told him. “Thank you for coming.” She invited him to the front of the room, but De Quiros, who was always known to shun the limelight, preferred to stay in a quiet corner. “But can we talk about you?” Sonia asked him in jest.

In an interview, Roco’s widow said she was honored that De Quiros himself came to celebrate Roco’s memory.

“I think this book will last longer than our lives combined. This is something that will keep his memory alive,” she said.

Readers of the book “will learn that once upon a time there was a Raul Roco who sowed the seeds of change,” Sonia said.

“If they read this book, those who know Raul will love him more. And for those who do not, they will see how our leaders really lead, what spirit moves them all, and what makes them go the extra mile,” she said.

The book launch was a night of remembrance.

A life-sized cutout of Roco in his trademark red Hawaiian shirt greeted arriving guests at Club Filipino. Some took selfies with the standee. Laid out on a table were some of Roco’s possessions, including the Hawaiian shirt, his old cell phone and pager, car keys, a bible and a book of his favorite poems.

Inquirer publisher Raul Pangalangan and Inquirer.net editor in chief John Nery were also at the event.

Saguisag said he thought one of the greatest moments in Roco’s political life was his famous cross-examination of prosecution witness Ma. Jasmin Banal during the impeachment trial of deposed President Joseph Estrada in 2001.

Banal, under questioning by Sen. Miriam Defensor-Santiago, admitted having transferred to a lower-paying job from the Serapio Law Office to the Romulo-Mabanta Law Office. This drew a scathing comment from Santiago, who was skeptical of the motivations of a lawyer choosing a lower-paying position.

When his turn came to question Banal, Roco asked a series of questions to refute Santiago’s view of the legal profession.

“And so when you transfer from a higher-paying job to a lower-paying job, that is not necessarily an erroneous career decision, would that be correct?” he asked Banal, who replied: “That’s correct, your honor.”

“In fact, it could be motivated by a sense of idealism,” he said, to which the witness assented.

“And it’s the women lawyers like you who should be motivated by such a sense of idealism. Would this be correct?” Roco asked. Banal answered yes.

“Yes, I thought that should be elicited because I was surprised to learn that the usual career pattern of lawyers is going from lower-paying jobs to

Saguisag said that memorable courtroom scene was one of the “many, many positive contributions that Raul gave this country.”

“He was really a unique and extraordinary individual,” he said.

In his foreword to the Roco biography, Saguisag, who lost his wife Dulce to a car crash in 2007, gave a glimpse of another, less serious side of the late senator.

“Raul was widely read and dazzled with his quotes, properly attributed. When I came home in November 1969 to ask for Dulce’s hand, Raul was among those who saw me off at the airport, and unobtrusively handed me a dog-eared copy of ‘Kama Sutra,’” he wrote.

Sonia said her husband’s sense of humor was one of the things she remembered most about him. “He never repeated a joke. When he began to shrug his shoulders, you would know he found it really funny,” she said.

“One thing I learned from him is when you decide on things, you decide as a 7-year-old kid,” he said.

He explained that at 7, a child’s thoughts are random but he decides according to what he knows to be right or wrong. The child does not decide based on outside interests like money or power, he said.

“I don’t know why it is that when they grow old, many people forget that. That’s one of the many lessons I learned from (my father) in my lifetime of experience with him,” said Robbie Pierre.

When he challenged President Gloria Macapagal-Arroyo for the presidency in 2004, Roco’s condition kept him away from the campaign trail. But he did not withdraw from the race, placing fourth behind former Sen. Panfilo Lacson, movie star Fernando Poe Jr., who died in December of that year, and Arroyo.

“He could have been the best President this country ever had,” said Herminio Aquino, who ran as Roco’s Vice President on a platform of hope.

In the biography, De Quiros quoted extensively from his interview with Roco, as well as from Roco’s interviews with other writers, including the late National Artist Nick Joaquin, and articles from periodicals like the Philippines Free Press.

De Quiros wrote little about his own encounters with Roco. But in the epilogue, he talked about three episodes that he believed would reveal Roco’s character more than anything else.

The first was his examination of Banal during the Estrada impeachment trial, which showed the nobility he ascribed to the law profession.

The second was during a visit to Naga for the Peñafrancia Festival in September 2003. Roco wanted to know if De Quiros had visited Our Lady of Peñafrancia, or “Ina,” as Bicolanos referred to the image.

“He credited her with many miracles in his life, not least how his wife, Sonia, survived being trapped in the rubble of Nevada Hotel in the Baguio earthquake in 1990,” De Quiros said.

When the writer replied that yes, he had visited the cathedral, Roco was pleased. “He seemed in such great anxiety about the state of my soul. He genuinely looked relieved at my answer and said that no one may be too busy to attend to the affairs of heaven,” De Quiros wrote.

The third was one of the stories Roco always told about his father, Sulpicio, a farmer.

“One day, when he was a small boy, he and his father were walking along the fields when his father stopped and pointed out the grain to him,” De Quiros wrote.

“To the end of his life, Raul never forgot that lesson,” De Quiros said. “He lived to be a good man.”