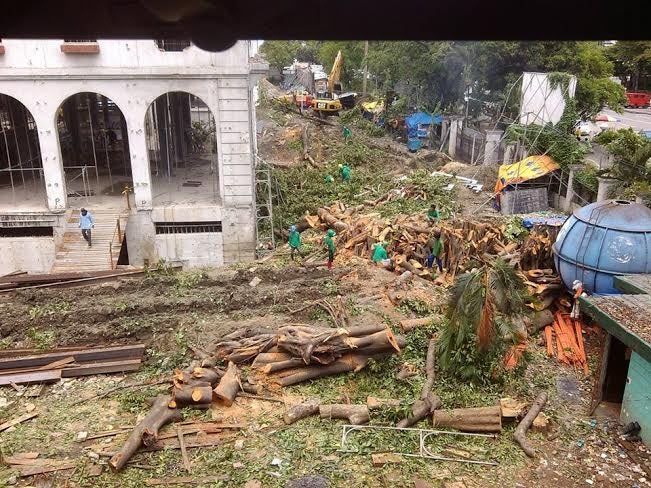 Trees at Army Navy Club cut down with DENR clearance

ANOTHER controversy is brewing at the Army Navy Club in Manila after the Department of Environment and Natural Resources (DENR) gave its developer a permit to cut down dozens of age-old trees at the compound of the historic building.

“What a shock to see all the old trees chopped to the ground,” posted Museo Pambata president Nina L. Yuson on her Facebook page.

“Heartbreaking as it takes 50 years to grow a tree. These ones were likely older than 50 years,” she said in an interview later.

“I guess they cut the trees over the weekend (July 31-Aug. 1),” said a disappointed Yuson, whose Museo Pambata stands adjacent to the Army Navy Club building.

“I don’t know how many [trees were cut] but they used to block the sunlight from our building. That’s how old those balete trees are,” she said.

The tree-cutting and earth-balling permit was granted by DENR on July 30 to the developer Oceanville Hotel and Spa Corporation.

In a letter to Maria Cristina Dorego of Oceanville, DENR regional director and officer-in-charge Lourdes Wagan said 44 trees were going to be “directly affected” by the redevelopment of the Army Navy Club building.

However, architect Felino Palafox Jr. of the Palafox and Associates, the architectural firm hired by the developer for the project, said the trees were part of his design.

“I don’t know [the cutting of trees]. Our architectural design proposals are to preserve the trees, plant more trees,” he said in a text message. 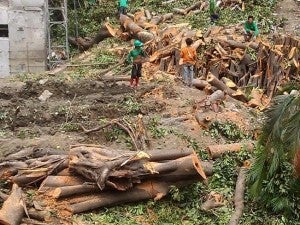 “We have no idea that the trees are cut down. Actually, we don’t know. The developers are acting on their own and we have no control on the activities at the site,” he added.

Part of the conditions set by the DENR is the installation of a tarpaulin explaining the purpose of the project as well as to conduct “extensive public consultations” with stakeholders in the area to explain the project and “resolve potential issues that may be raised.”

Yuson said none of these was undertaken.

The DENR also said in its letter that it should be informed by the developer “three days prior” to the cutting and earth-balling.

The permit was approved July 30, and by Aug. 2, a big number of trees had already been felled. No consultation with stakeholders was carried out. Nor was DENR informed.

Nicolas Docena Jr. of DENR Enforcement Division, in a phone interview, said that the prescription “within three days” meant “prior” to the cutting and balling of trees.

Just the same, Docena insisted that the developer had informed them within the prescribed number of days it would cut down the trees that weekend.

Oceanville Hotel and Spa Corporation did not comment on the issue.

The Army Navy Club became controversial last September after it was gutted out and its adjacent structure demolished by its developer, the first of a string of heritage conservation issues in Manila called “September Massacre” by the Heritage Conservation Society.