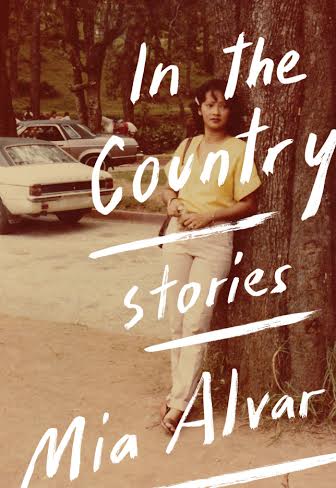 THE COVER of Mia Alvar's "In the Country: Stories"

THE PLACES we’ve been often have a deeper, more enduring effect on us than the places we find ourselves in.

In Filipino-American fictionist Mia Alvar’s debut collection “In the Country: Stories” (Alfred A. Knopf, New York, 2015, 347 pages), the Philippines hangs heavy over all the characters, regardless of where they go and when the events happen.

The New York-based writer presents nine impeccably crafted stories, each one with ties—luminous and larcenous—to the country of Alvar’s birth, a place one of her character describes as “a country that doesn’t even know it own fate.”

Little details and sharp description populate Alvar’s stories; the stories also follow Alvar’s own lifetime itinerary from Manila to Bahrain and New York. “The Kontrabida” focuses on these small elements in showing how a Filipino pharmacist from New York comes home to discover family secrets unexpected and unwanted. In “The Miracle Worker,” a Filipino expatriate’s wife becomes a special needs tutor to a wealthy child in Bahrain, forced to reevaluate her own needs and beliefs.

In the surprisingly inventive “Legends of the White Lady,” Manila itself becomes an unforgettable character as a troubled, cynical American model blows into town in the hopes of finding a gig, finding herself haunted by all kinds of things, with each day she spends in the country leading to a personal flashpoint. Alvar returns to Bahrain for “Shadow Families,” a raucous and irresistible whodunit of sorts with a crowd of displaced Filipino wives as instigators and investigators. “The Virgin of Monte Ramos” is about infirmities and very old wounds while “Old Girl” is an ambitious, fictionalized take on the inner life of an exiled senator’s wife in Massachusetts.

The three best stories in this excellent collection pull apart the frayed edges of the Filipino experience. In “A Contract Overseas,” a poor university scholar tries her hand at writing short stories, but discovers that she is most comfortable turning into fiction the facts of her older brother Andoy’s work in Saudi Arabia.

The story begins by faithfully recreating the experience of Filipino families with Overseas Filipino Workers (You will never look at aviator glasses and denim jackets the same way) but then turns abruptly into something different. When Andoy strays into unknown territory, the narrator’s own stories go off in strange directions.

The dazzling “Esmeralda” features the Filipino cleaning lady wandering the crazy streets of New York in the immediate aftermath of 9/11. The haphazard journey into the big city leads Esmeralda to recall how she wound up essentially stranded, the chances she’s taken advantage of and the ones she’s wasted. Together with the reader, Esmeralda walks into the darkness.

The longest story in the collection is the titular tale. “In the Country” chronicles the events of a marriage between a nurse named Milagros and a journalist named Jim in the long, inescapable shadow of the Marcos dictatorship.

There are multiple tensions at work here: between male and female, husband and wife, lost and left behind, the responsible and the helpless. Hope and optimism become sigils to ward off the threat of ugly reality. As the dictatorship fades, Jim returns from detention to find a family living on the verge of quiet implosion. As “In the Country” moves from year to year, Milagros asks who is to blame for all this.

Like baubles with cracks found deep within, the stories in Alvar’s collection are intricate and treacherous. They feel like Jenga towers just at the moment of falling apart but with some unknown, unseen force holding it all together. Alvar picks apart the different aspects of what Filipinos live through with precision and shrouds them with prose as beautiful and sharp as broken glass.

“In the Country: Stories” is a breathtaking debut from a breakout talent, as unforgettable as the places she’s been.

“You can leave a place, but places have a way of not leaving,” one character warns. “You won’t forget what happened here, no matter where you go or how you try.”

Available in hardcover from Fully Booked.