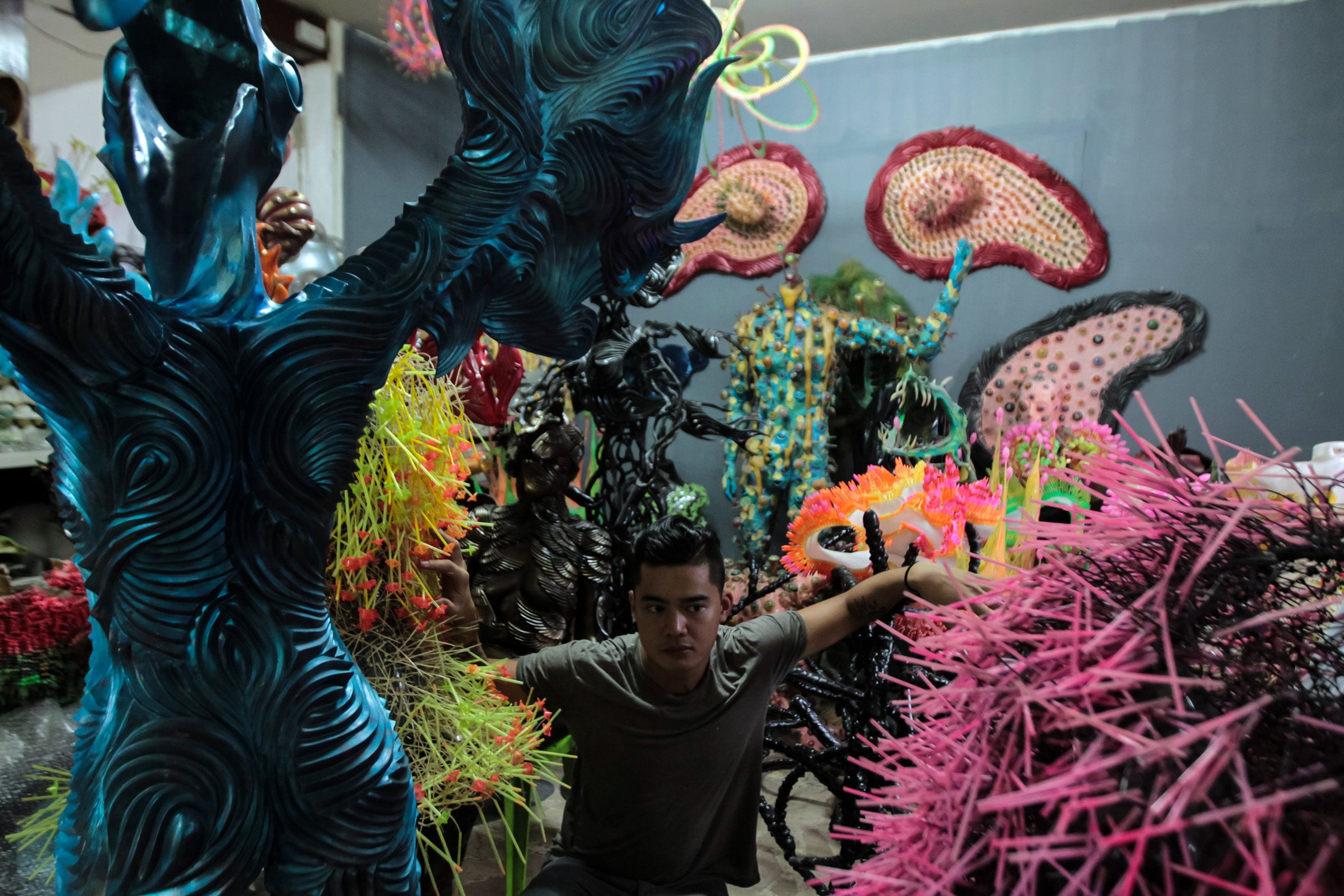 HIS workshop is both cabinet of wonders and house of horrors.

The art monster in Leeroy New

The houses here look alike, and the gate of New’s property is so ordinary looking—a somewhat distressed gate with no signs whatsoever—that people easily miss it even when they’re looking for it.

In the yard within are monsters in varying states of being, some fully formed and finished, others still being molded into being. The unfinished ones look particularly creepy because of their ambiguous state.

All this is part of New’s art operation—and it hasn’t been easy.

“I always have problems with neighbors,” New explains. “They complain about the noise, like when we’re doing something. Sometimes it’s like the smell of a particular material, whatever. I try to keep that to a minimum.”

Inside is New’s office, a space so normal it could easily pass for a small insurance operation, but one door opens and an adjoining room reveals New’s menagerie, a cabinet of wonders and house of horrors all in one.

This room is wall to wall filled with the creatures and shapes that inhabit New’s head. They initially seem to mimic the shapes of familiar creatures but a closer look reveals the marks of New’s artistry, the grooves and lines that follow their bodies, the wistful expressions on their faces, how they’re made from everyday objects. The more you walk into the room, the deeper you get lost.

You are literally surrounded by monsters.

“Some kids are just naturally fascinated with monsters, aliens, creatures. I was attracted to them because that’s how I was inclined to draw things. They seemed like the perfect subject matter for me because the normal rules did not apply when depicting monsters. For me, in my head, I could shape and shift the rules whenever I wanted. There was no template on how to draw these monsters.”

So the biggest art monster of all is the one in plain sight, in the plain T-shirt: The 29-year-old New takes the mundane and makes it otherworldly—this has made him perhaps the hottest artist working in the country today.

“I don’t subscribe to that way of thinking,” he says.

New doesn’t subscribe to a lot of the usual things. Take how people use the word weird when it comes to him and his work.

“I would never use it to describe myself. I’ve mentioned the word to describe the way people see me,” he says. “For me, it’s simply the natural way of doing things. I wouldn’t call it weird, but other people have. That’s when you realize you’re different when people think you’re different.”

That variance began back in New’s childhood. Born in General Santos City the third of four children to a banker and a restaurant manager, Jan Leeroy New grew up in a conservative atmosphere.

“Having an opinion was almost equivalent to being disrespectful,” he remembers.

He watched a lot of cartoons and horror movies and drew as much as he could.

“I pretty much started creating my own worlds back then,” he says, but he didn’t see it as art, not yet at least. For him, art was what he saw hung around him or sold in the streets, scenes of farmers working and fisherman plying their trade.

That would all change when New was accepted to the prestigious Philippine High School for the Arts in 1999 in Mount Makiling.

“It was one big culture shock. Everything,” he recalls. “You were plucked from this small town and you were displaced in sort of an environment where there were too many ideas to handle. I was seduced by all these alternative forms.”

From Makiling, New would go on to attend the University of the Philippines College of Fine Arts, graduating in 2007. He didn’t wait, however, pushing to do shows and create more worlds even in high school.

“I was a very impatient kid, I guess,” he admits.

This is the part where the art monster conquers all, swatting the little airplanes of ignorance out the air like a kaiju. Since then, New has gone on to exhibit here and abroad, installing his trademark sculptures everywhere you could imagine, from the sand dunes of Paoay to the sands of Boracay.

He finds buildings and then drapes the exterior with strange materials. His creations feel like undocumented animals reaching for the sun for the first time. His other creations are wearable, helmets and dresses unlike any other.

Then there was the dress for the Mother of Little Monsters. In 2011, the pop singer Lady Gaga appeared in an easily recognizable New-designed sculpted dress on the cover and in the music video “Marry the Night.” It turned New into the hot topic of conversations at the time—and stayed silent throughout the rush.

“I make it a point to rarely mention it. I only talk about it when it comes up. Even when it came out, I didn’t do any interviews. It took a while. It’s been tempered by time,” he says today. “Even before then, I was already being recognized as one of the few who do outdoor work and all that. Now, I’ve done a few other things which make it just another thing I’ve done. It’s not the goal, it’s not the peak.”

There is a kinetic energy that seems to move New forward then as now, an energy informed by endless viewings of “The Addams Family” and the “Shake, Rattle and Roll” movies.

“I realize that as your career expands and extends, it doesn’t get any easier,” he says. “The schedule keeps getting bigger. You work with more people. I’ve been working as hard as I’ve ever been. Before, it was really hard. You’re putting up stuff on your own and doing everything by yourself. I think it’s pretty much the same but it’s the intention and the vision and the responsibility keeps getting bigger.”

A good example of that is New’s ongoing collaboration with urban designer Julia Nebrija, the Pasig River Interactive Festival.

He is referring to the grant they received from the world-famous Burning Man festival in Nevada. New envisions floating gardens, public art spaces, even a river tour of buildings like Malacañang.

“We’ve been thinking about this and it’s transforming and creating a creative identity for the river,” he says. “It’s such an untapped creative platform. I guess my work with the Paoay Sand Dunes has drawn me to all this seemingly hopeless causes, but it’s fun.”

There is much he’s still up to, such as more public work, group shows here and abroad, and the continuation of New’s “Aliens of Manila” project, which is a video artwork featuring people dressed up in their own handmade alien costumes.

“We hope it’ll get people involved and participate it these virtual galleries that have no need for physical galleries. The means for representing and displaying art has evolved greatly because of these media platforms,” he says.

Affecting the public instead of just making art per se: He’s taken on the mantle of agent of change.

It’s not enough for him to just make stuff—it has to have some meaningful effect: “When you take off from the idea that sculpture is this, the manipulation of matter and ideas. What it has to be able to adapt and evolve like I have. How sculptors have evolved into performance artists and into social innovators. I think that the concept of art is constantly evolving.”

His own materials have moved from a predilection for polymers and fiberglass to found objects, silicone, latex and basically the things he finds when he’s snooping around Divisoria. He’s experimented with actual humans.

Through it all, New has kept working. He has a room at the studio and he stays there pretty much all the time. “It seems so random and fluid. I don’t have a timetable for myself. I’m basically just a freelancer at heart. I work during the weekends, really late nights, work all night. It depends. My desire to create determines my work practice.”

Even his spare time is devoured by his passion: “I hang out with other collaborators and we wind up talking about work. It’s like refuelling. Most of the people I end up working up with are people I hang out with and vice versa. And the people I work with I wind up drinking and partying. We do take time to have fun. I mean, our work is fun, like how fun is it that you can actually get a structure to float on Pasig River? We were pretty high that day.”

His increasingly busy life and his increasingly public profile are reflected in the range of his work and his rates. “It’s not something I really talk about,” he admits. “There’s no one template. Each work that I do has its own specific concern.”

His work goes for anything from working for free to seven figures. That’s pretty much a no-limits budget.

In the meantime, New changes everything he touches in most unpredictable ways. “What I’ve learned is that, in order to teach yourself more things and relate to people more, one way is through collaboration, by teaching yourself, helping you unlearn certain things,” he says. “It’s one way to give myself breathers, too. If I’m bored with doing this one thing, I’m going to shift to this other thing. It’s one way of not making me too exhausted with what I do.” There are, after all, things to change and worlds to create.

Just as it is with the imagined monsters he loves, there are no rules when it comes to Leeroy New.