Classical musicians on reality-TV music auditions: ‘They don’t help performers and the art at all’ | Inquirer Lifestyle ❮ ❯ 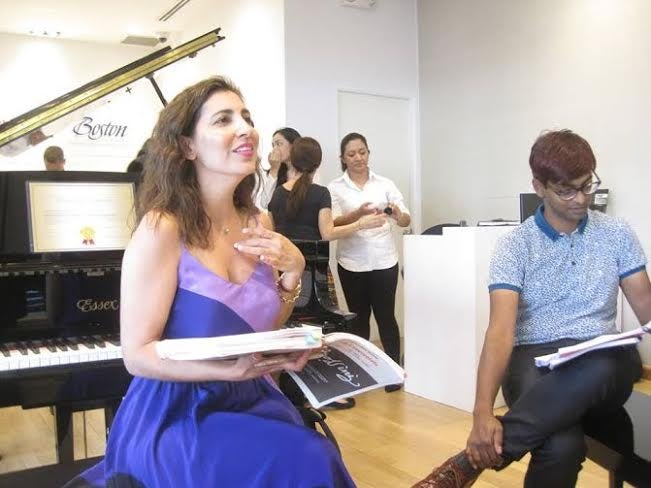 AMERICAN mezzo Karin Mushegain rehearsing at Steinway Boutique. For as long as the audiences are there, her passion for opera will remain.

Classical musicians on reality-TV music auditions: ‘They don’t help performers and the art at all’

ART VERSUS mediocrity is the conflict in the Moises Kaufman play “33 Variations,” which is running on weekends at White Space until Aug. 23.

Shamaine Centenera-Buencamino, as Katherine Brandt, renders a vulnerable portrait of a Beethoven specialist and a working mother who has a distaste for the mediocre. She is obsessed with unlocking the genius of a deaf Beethoven, to the point of neglecting her role as a mother.

With 33 Variations on Op. 20 in the background, the twin lives of the obsessed fan and the indecipherable genius are laid bare for the audience to contemplate. Very appropriately, it is a play that shows us what artists sacrifice in the temple of art.

But mediocrity is not alone the enemy of art. There’s also the mediocre audience. And this audience is fed by a steady diet of pop music which is unabashedly commercial.

This came to mind when the media met the cast of the concert-opera production by the Cultural Arts Events Organizers of Rossini’s “Cenerentola (Cinderella),” on Aug. 15, 8 p.m., at Meralco Theater.

With Broadway and West End musicals that are “audience-friendly” and mediocre and tacky TV singing and performing competitions, can classical music still survive?

“Different kinds of music attract their own set of audiences, and it’s true in my opera calling,” said American mezzo Karin Mushegain. “I am happy to note that opera audiences are still there, and in Cenerentola, the audiences are as young as 10-year-olds cheering for Cinderella.

“When I see these young people react to opera performances, I derive extra energy and inspiration. Because let’s face it, opera doesn’t easily translate into instant fame and fortune. But I like the sense of commitment both the artists and the audiences give this art form.”

In a press con at Gerry’s Grill last week, conductor Darrell Ang said the arts would remain an edifying source of entertainment for select audiences all over the world.

“But I am aware of the difficulties. I know some opera companies in the United States are folding up, and those even so-called stable companies like the Met has funding problems. But the audience remains a source of inspiration. They keep opera alive. That is why we should do something to educate future audiences and expose them to the art form at early age.”

In his personal invitation to Filipino music lovers, Ang noted Rossini was only 25 years old when he wrote “Cenerentola”; he was at the height of his powers.

“One feels nothing less than awe and admiration for the composer’s assuredness and virtuosity in turning this most beloved of fairy-tales into an impressive array of musical numbers which showcase the wonders of the human voice—that most glorious, most agile, and most beautiful of instruments!” said Ang. “It is hard to imagine any other state of being other than pure rapture when, at the end of the performance of ‘La Cenerentola,’ one returns home believing that anything, indeed, is possible—and Rossini, perhaps urged on by divine inspiration, showed us the evidence: that opera, under the hands of such a genius, can, indeed, be the cure for all our woes.”

On the proliferation of televised singing competitions all over Asia and Europe, the “Cenerentola” team agreed it did not help the singer and the arts at all.

Observed Ang, who will lead the Manila Symphony Orchestra in the one-night engagement: “All they get is 15 minutes of fame on television when they win. Most likely, they disappear right after. In the arts, there is no such thing as overnight success. Both singers and conductors study long years before they are allowed to perform in public. Of course, you get those monetary remunerations, which don’t last, anyway, and then start all over again.”

Tenor Arthur Espiritu, who is all set to reprise the role of Don Ramiro in his debut appearance with Staatstheater am Gärtnerplatz in Munich on Nov. 5, agreed: “Singing is a life-long commitment. It is not perfected by a week of coaching and then a few nights of television appearances. You get tips from the judges but they are not likely to last. I get my lessons from years of sessions with my voice teacher.”

Others in the cast of “Cenerentola” are Byeong Im Park; Myramae Meneses and Tanya Corcuera (as the stepsisters); and Ronnie Abarquez (as Alindoro).