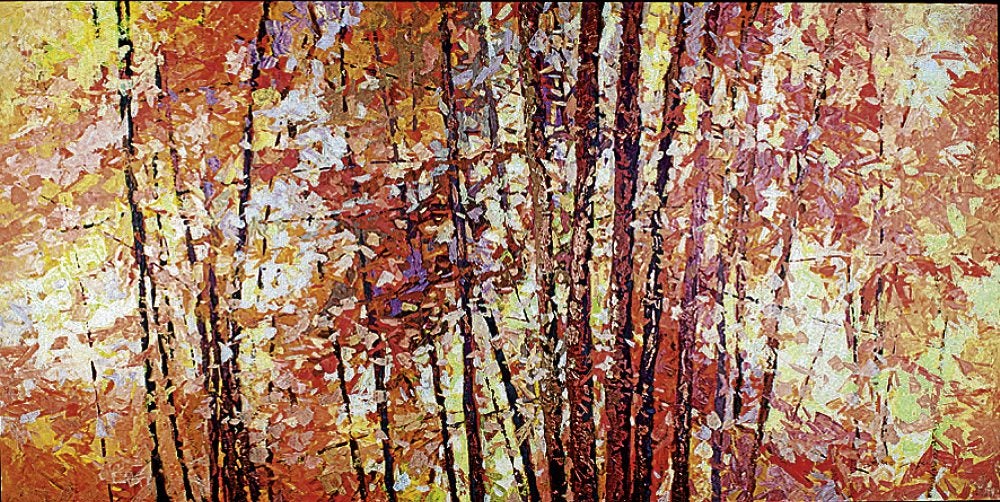 Into the woods with Bati’s ‘Bamboo Groves’ 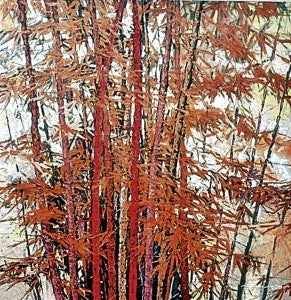 In Fabian de la Rosa’s “Homeward Bound,” a farmer astride his carabao trudges along a lane framed by lush, soaring bamboo from either side forming a cathedral-like dome.

In Fernando Amorsolo’s pastoral paintings, modestly draped maidens take a bath along a stream under the canopy of a copse of bamboo.

In Felix Resurreccion Hidalgo’s river scenes, Philippine idyll reaches a zenith of bucolic serenity in the dark-green thicket of bamboo reflected on the serene water.

But, of course, the bamboo is an integral sight in Philippine life and landscape. From the bahay-kubo (nipa hut) to the national dance tinikling to our world-famous bamboo organ, there are as myriad uses (furniture, basket weaving, fences) as there are species of this hardy tropical grass, often regarded as a tree.

Moreover, the bamboo is considered a symbol of the Filipino, capable of enduring the onslaughts of lashing storms and searing sun. It is inspiring for its tenacious capacity to bend with the wind in the face of adversity.

As the expression goes: “Notice that the stiffest tree is most easily cracked, while the bamboo or willow survives by bending with the wind.” The source of that quote is the Chinese proverb “The taller the bamboo grows, the lower it bends.”

Against this background looms the art exhibition of Brando Limon Bati at the recently launched Indios Bravos Gallery. Titled “Shimmering Path,” it was a visual anthem to bamboo.

Of such soulful yearning are these images of bamboo, evocative not only of a native topographic landscape but also of a spiritual terrain, radiating spiritual light.

The artist engages the viewer at once from a distant perspective and with an intimate approach. In his dense proliferation of bamboo leaves, illusion and depth create scenic abstractions that have been lavishly rendered with palette knife, each stipple punctiliously delineating a tableau of nature.

And yet the sheer enraptured verisimilitude of bamboo, in its determined spread, becomes vitally alive, diaphanous despite the overladen textural grit of pigments.

Bati’s pictorial space is crammed with details that provoke spatial ambiguities, such that the multitude of leaf patterns, in the manner of the French pointillists’ tumult of polychrome strokes, merge, through retinal blending, as a cascade of spring and autumnal colors.

Like cathedral scaffoldings, the vertical bamboo poles bisect the surface at a rhythmic pace, jutting out from a rumble of leaves, sometimes barely visible through the layers of a darkening curtain that allows an assertive radiance of light to shine forth. What comes across is a struggle between a lyrical mood and a tensile passage through a dense, tangled path.

Reference to light abound, as can be gleaned from the titles. And though the ostensible subject is the bamboo and its proliferating leaves, the sage in the artist clearly summons light, breaking up into prismatic splinters.

Interestingly, Bati attributes the idea of painting the bamboo to the late Manuel Duldulao, the pioneering publisher and writer of coffee-table books on art.

Like so many other artists who depicted floral still lifes and Mother and Child theme, Bati was in search of another engaging subject matter. He found in the bamboo an emotive subject rich with the potential of fragmentation of space, a visual image that allows for the seriality of variations without the risk of exhaustion, and a fusion of realism and abstraction.

Spearheading the Indios Bravos Gallery are proprietor Lizza Guerrero Nakpil and curator Mike Melchor. No gallery name could be more emotionally resonant, by turns recalling the 19th-century Filipino expatriates in Madrid espousing the cause of freedom, and the Bohemian café in Ermita back in the Swinging Sixties.

Located at the corner of Ortega and A. Mabini in San Juan, Indios Bravos Gallery is itself a brave new venture into art promotion in that part of town.