The inside story of ‘Inside Out’ | Inquirer Lifestyle ❮ ❯ 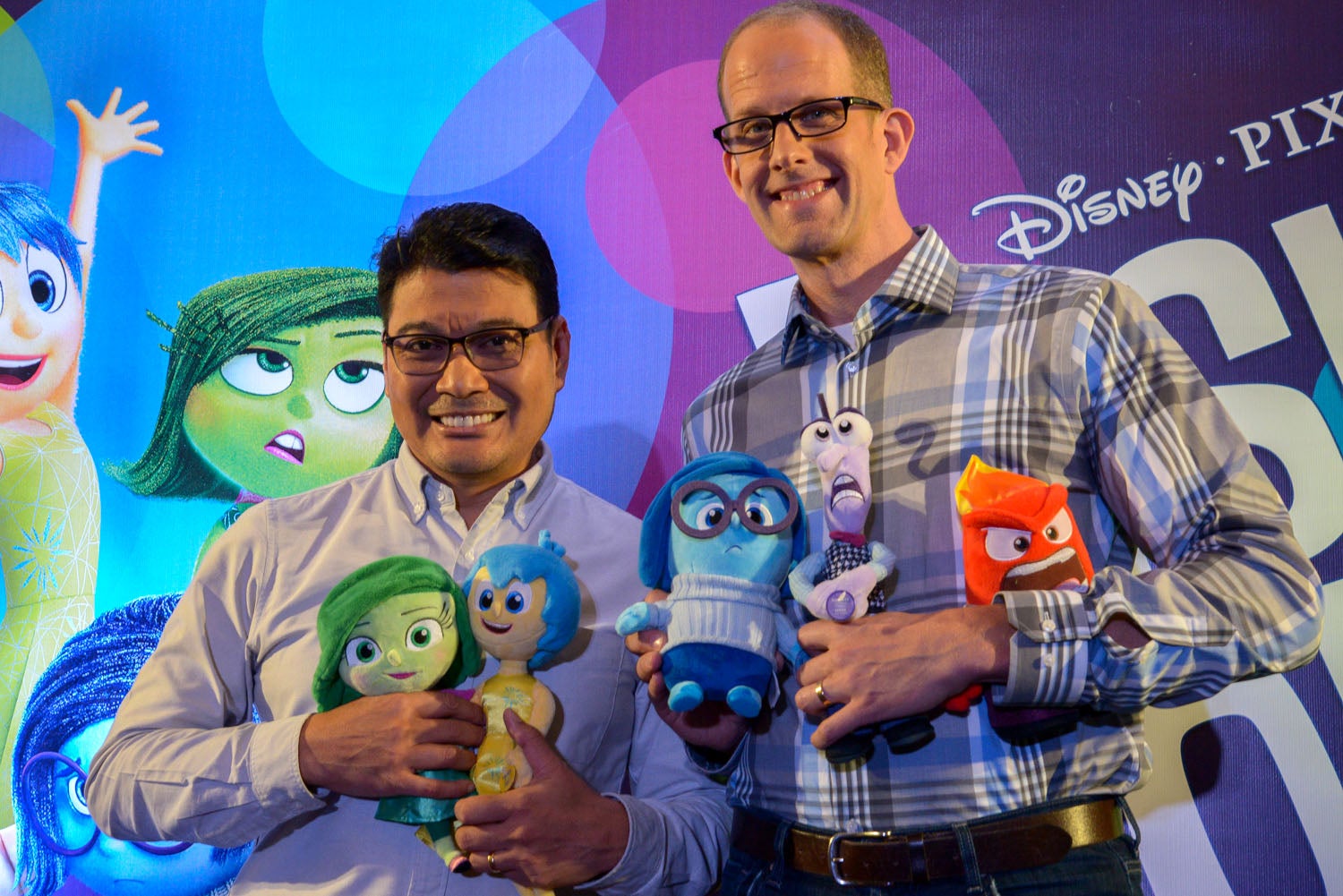 THE “INSIDE Out” directors, posing with toys of the five emotions, trust that their film will be loved by all ages, because kids are smarter than we think. PHOTOS BY ELOISA LOPEZ

The inside story of ‘Inside Out’

Pete Docter and Ronnie del Carmen really get along. That is the biggest takeaway during the two’s appearance before the gathered Manila press to promote the Disney/Pixar film “Inside Out.”

The duo does cartoony things together and back up each other’s accounts while discussing the goofy genesis of what may be Pixar’s most ambitious film yet.

“I’ve only been here less than a day and I’ve already eaten three times,” says the skinny, beaming Docter. “Pete’s next animated film will be about bibingka and kalamay,” jokes the Filipino-American del Carmen.

While the movie has yet to open in Manila theaters, it’s already worked its magic in the United States, where it not only held the no. 1 spot at the box office, but earned an impressive 98 percent on review aggregator site Rotten Tomatoes and made more than $630 million. Filipinos love Pixar films, and it’s expected “Inside Out,” with its family-friendly formula, will do very well once the movie opens on August 19.

“Inside Out” reveals the inner workings of the mind of an 11-year-old girl named Riley. Inside her head is a control room called Headquarters where five emotions—Joy (voiced by Amy Poehler), Disgust (Mindy Kaling), Anger (Lewis Black), Fear (Bill Hader) and Sadness (Phyllis Smith)—try to lead Riley to do the correct things.

But when Riley’s family moves to San Francisco, Headquarters is thrown into disarray, especially when Joy and Sadness are lost in the mental wilderness.

That’s the story of “Inside Out,” but the story behind “Inside Out” is something else. It starts with a girl named Ellie.

If that name sounds familiar, that’s because Ellie is the name of the girl in the first part of the 2009’s Oscar-winning Pixar film “Up.” Ellie is also the nickname of Docter’s daughter Elizabeth, who actually voiced the character Ellie in that film, her ebullience and laughter being perfect for the character.

But in the ensuing years, the real Ellie grew up. She was already 11 when Docter realized his daughter had changed and become moodier. He wondered what was going on in Ellie’s head—leading to the premise of “Inside Out.”

Del Carmen understood, because he has a daughter, 25-year-old Gerin, who went through growing up as well—and who also works in film.

Del Carmen is well-known for his “accidental career” as an animator after leaving Manila’s advertising industry. He joined Pixar as story supervisor on “Finding Nemo” and “Up.”

So Docter asked del Carmen to come aboard “Inside Out” as co-director. “I usually try to do something we haven’t done before. It’s an opportunity to do something familiar and yet has never been seen before,” Docter explains, adding that some 270 artists wound up working on the film.

The film is not your expected animated landscape as it deals with something quite complex.

“This film was a real challenge,” Docter says. “We set it not in the brain but in the mind.”

They had to completely visualize the film’s elements, and this worked towards the two’s strengths.

“I would say some thing and then I look over at Ronnie and see he’s drawn it already,” Docter says. “I can’t imagine working on this film without Ronnie.”

Del Carmen reveals that their offices are next to each other at Pixar’s Emeryville, California headquarters. “It would be back and forth,” he says. “When I get excited, Ronnie gets excited,” Docter adds.

The complexity of “Inside Out” is bolstered by its profound emotional aspect. Docter says they used the act of moving as a metaphor for growing up, and the directors ended up mining the creative team’s memories for the film.

“It’s like therapy without the therapist,” Del Carmen says with a smile. “So we remain dysfunctional.”

The film started out as a sprawling enterprise (27 emotions including Depression and Pride) before they were condensed into the final five. The voice actors came in and wowed them, proving to be perfect choices in what turned into a greatly collaborative endeavor.

Poehler was doing things in the recording booth that Del Carmen wished they had thought of. The irascible Black was Docter’s first choice to play the volcanic Anger. Kaling’s natural reaction to things really is to be disgusted. Hader brought a lot of different characters to the session.

The movie’s surprise is Smith as Sadness. Docter says he cannot imagine anyone else playing Sadness, and viewers will soon find out why.

“Inside Out” proved so unique and meaningful that some questioned whether it was something children should watch. Parents would get the film’s symbolism, but would it go over the heads of its younger viewers?

“Kids in the world are way more intelligent than you give them credit for,” Docter says. “It’s simultaneously sort of the most realistic film we’ve ever done, and we’ve set it in a specific place, Sam Francisco, yet it all takes place in the mind, which is a completely made up space.”

Talking about settings, it’s the first time Del Carmen will be seeing a film he’s worked on debut in the Philippines; he’s been living and working in the United States since 1989. The promotional trip is a homecoming for him, of course. He reveals that a group of Filipinos working at Pixar—nicknamed the PixNoys—do things like get together to cook adobo or hold charity events for typhoon relief.

And as things come around, it all goes back to Ellie. After being inspired to make what became “Inside Out,” Docter kept the project secret from his daughter. It took five challenging, creative years to finish.

Pete Docter was really nervous when he attended the first screening with Ellie, who was 16 now, more subdued, very much a teenager.

She seemed to be the most difficult audience of all—but “Inside Out” apparently has a way of touching everyone. Quiet throughout the showing, Ellie turned to her father after the movie and said simply, “Great movie, dad.”

Disney/Pixar’s “Inside Out” opens in cinemas on August 19.