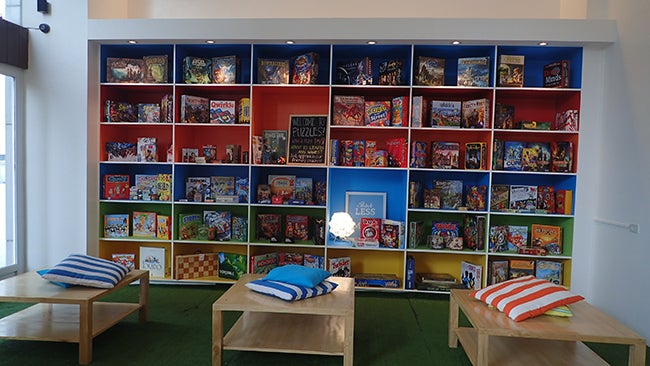 Like many other bright ideas, it started with a passion. In the case of Anton Valencia, Roby Camagong and Sam Bengzon, it was their love for playing board games.

The trio have been friends for years, holding regular board game nights with their friends. Valencia and Camagong know each other from their student days at De La Salle University in Manila; they met Bengzon at Crossfit.

“At one point, we thought, why not share the experience with everyone?” Camagong says.

They searched Google for board game restaurants and found out only a couple existed at the time, one in Ottawa and another in New York.

“So, we thought maybe we could do this in the Philippines,” he says. “We tried to bring in that kind of idea, to share that kind of experience with everyone.”

Last year, Puzzles Board Game Lounge was launched in BF Homes, Parañaque City. Recently, it opened its second branch in a quiet corner at The Fort Strip, Taguig City. Able to house 60 to 90 players all the way to the loft, the new branch is bigger and boasts a more extensive menu.

It has only been a few days since they opened their BGC branch to the public, but it doesn’t take long for the place to fill up, pouring rain notwithstanding. Patrons feel immediately comfortable stepping into the bright and airy lounge, as if they’ve been there before, and they know what to do. In fact, perhaps they have and do: Valencia shares that a few days into the soft opening, they had three tables full of customers who frequent their BF branch.

“In Puzzles, what we want to believe is, whoever comes here is part of the Puzzles community. We’re trying to build a board game community, to build bonds among different customers.”

Luckily for the owners, not only did the BGC lounge inherit some of their first branch’s loyal customers, but it seems to have likewise adapted the sense of community that’s been cultivated in its BF counterpart.

Customers come in, plop down on couches or huge pillows by the low tables on the “grassy” platform—a favorite spot, no doubt, since it’s closest to the game selection—and take their pick from a wall-sized shelf full of board games. Patrons gravitate to that wall like moths to a flame; that is, after all, what they go there for.

Vast and colorful, the attention-grabbing shelf holds a wide assortment of games—from classics (like Chess, Scrabble, Monopoly, The Game of Life, and even Games of the Generals, a board game created by Filipino Sofronio H. Pasola in 1970) and hot favorites (like Cards Against Humanity, Taboo and Telestrations) to those that force players to get physical (Twister and Quelf).

Popular among players are Avalon and Resistance, games of trust and betrayal—true tests of friendship.

“Basically, Avalon and Resistance run on the same engine. These are betrayal games where there are going to be a few traitors in your group and you try to weed them out,” Valencia explains. “They’re really fun.”

However, Jorel Redoblado, currently the BGC branch’s only regular coach, warns that some players take betrayal games personally. What players know of their friends usually comes into play when they engage in these sorts of board games, or vice versa: what happens in the games affect the dynamics of the friendships, or at least the next round of the games. Walk-outs, he jokes, have been known to happen.

Redoblado, who started out as a loyal customer in BF, is now also a partner in the BGC branch.

“He was really into board games and he joined our group, and now he’s a partner in BGC,” Valencia says.

“We really built a community, and Jorel’s a perfect example of that,” Camagong says.

The lounge’s other coaches are usually high school or college students looking for something to do during their down time. It’s not work for them, it’s just play, he says.

Upon request, coaches help customers choose a game they might be interested in playing, teach them how to play it, and sometimes even join them for a round or two—or more.

Redoblado says he knows most of the games, but doesn’t claim to know how to play every one by heart. After all, there is an entire wall of them, each with its own set of rules and objectives.

“If I don’t know the game before hand, you’ll see me sifting through the manual in one corner studying it,” Redoblado admits.

Valencia says, “Jorel knows more than we do when it comes to the board games, but we all play together.” Sometimes, they also play with the staff.

Valencia and Camagong’s personal favorite is a game called Agricola.

“Basically, it’s a game of farming. You have to create the best farm and beat the other farmers,” Valencia explains. “Like, I have the most sheep, I’m so good!”

“It sounds boring, but it’s really fun!” Camagong says. “You live and die by your decisions.”

The only problem with Agricola, they say, is that it takes about three hours to finish, and most people don’t have that much time for playing. But they’ve been known to extend store hours to accommodate their customers.

“We’re only usually just open till 2 a.m. on Fridays and Saturdays. But, last time, we closed at 3 a.m., because we don’t want to cut people’s games. We want them to have fun,” Valencia says.

For long-drawn-out games, Puzzles BGL offers a Stay and Play option for P100 per person for the entire day.

“For the Stay and Play, you may play as many games as you want. We can teach you as many as you want,” Camagong says.

Valencia adds, “We have that in place because we want to maintain and expand the collection. Next month, we’ll have more games on the shelf for sure.”