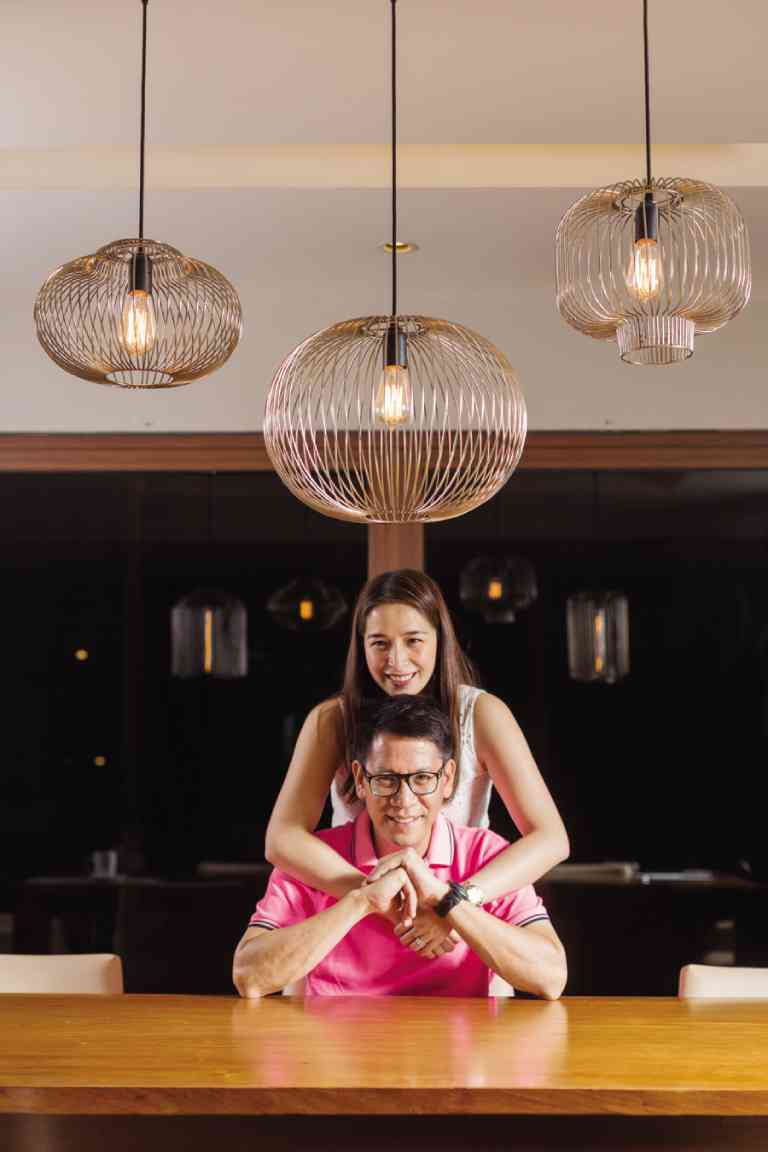 THE ROMULOS in their dining room JILSON SECKLER TIU

Roman and Shalani, in a home filled with love, TV comedies—and talk on education bills

Pasig Representative Roman Romulo and his wife, the former Shalani Soledad, don’t need to say out loud that they are a happy couple.

Three and a half years after their wedding, they still hold hands as they walk around the house in Valle Verde where Roman and his four siblings were raised by their parents, former Senator Alberto Romulo and his wife Lovely.

Roman and Shalani finish each other’s sentences with affection, and listen with interest as the other speaks.

In a chat with Inquirer Lifestyle, Roman remembers when he and Shalani first met—at a party celebrating the birthdays of common friends.

After polite exchanges following their introduction, the two eventually engaged in a heated argument over the controversial Reproductive Health (RH) bill pending at that time.

Shalani, whose job then required her to draft and examine ordinances to be implemented by her local government, was supportive of the proposal.

Roman, part of a national legislative body tasked to scrutinize the priority bill, was against it.

Perhaps because the two were in the business of lawmaking, the conversation that night was unforgettable.

Roman says he and Shalani still have arguments over bills filed at the House of Representatives. He treasures these dialogues. After all, not every representative has a smart wife with a hands-on background in lawmaking.

“She might suggest something about the bills I file, sometimes about the mechanics of implementation. I admire her insight on the inner workings of the local government units,” notes Roman, chair of the House committee on higher and technical education.

Shalani says that in many cases, she would tell Roman how a bill could possibly impact an LGU like the one she served for years. This does not mean, however, that she behaves like a stage congressional spouse.

She is not the type who shows up unannounced in Roman’s office.

“I have a high respect for Roman’s organizational chart. His chief of staff would know his schedule better,” Shalani points out.

But life at home does not always revolve around politics. Shalani says they look forward to weekends to watch movies once Roman finishes a grueling schedule of sessions, hearings and consultations.

“The whole movie had only two characters for most of the screen time. Imagine, ilang characters lang? We did not have expectations, but magaling na movie,” Roman exclaims.

Other flicks they recently enjoyed include “English Only Please” starring Jennylyn Mercado and Derek Ramsey, and “Kubot” with Dingdong Dantes.

The two also bond over their favorite comedies on TV, like “Big Bang Theory,” “Modern Family” and “Two and a Half Men.”

The lawmaker says that he and Shalani are not the bar-hopping types. They may have favorite restaurants, but the wife insists on cooking meals for Roman at least three times a week.

“Roman likes pasta and sandwiches. So I would think of what to put in those sandwiches. He doesn’t like rice, while I’m a rice person,” Shalani says.

The nonnegotiable food preferences have led to interesting culinary adventures at home.

It was also touching how the couple served food to guests. They were also the ones to put away the china after the meal.

Shalani recalls one time Roman insisted on eating kare-kare without rice—something quite unthinkable for her, given the rich sauce and bagoong that go with the meal.

Shalani keeps busy with Victoria’s, a restaurant in Valenzuela named after her niece.

“It serves palabok, pancit Malabon and sotanghon. Very soon we’ll put up a branch here in the clubhouse,” she announces.

Roman is now on his third term as representative of the Liberal Party (LP) in the lone district of Pasig. His exposure to education issues as chair of the House higher learning committee is inspiring him to consider higher office so he can push education as a “primary driver” in sustaining the administration’s Tuwid na Daan campaign.

So far, Roman has been instrumental in the crafting of three crucial bills—“Iskolar ng Bayan” that grants college scholarships to the top 10 graduates of public high schools, the Open Distance Learning bill, and the Ladderized Education proposal.

“The three are set to be signed into law. A fourth bill, the Unified Financial Assistance in Higher Education, is expected to be passed before the year ends,” Roman says.

As chair of the House higher education panel, he is invited to graduation ceremonies throughout the country, and has heard a lot of stirring stories from students addressing their colleagues before they enter the real world.

One student from Capiz, for example, announced to his batch mates how proud he was of his father, a tricycle driver who braved storms and sun to send him to school.

A valedictorian from the Polytechnic University of the Philippines had one simple piece of advice for friends who may encounter corruption in case they find themselves working in government: “Huwag tayong pumayag, huwag tayong pumatol.”

A third narrated that his mother was forced to work in an adjacent province to help make ends meet for the family. Eventually, she fell in love with another man while sending money home to them.

The student pointed out this “social cost” to their family, a consequence they had to face because the mother had to send the children to school.

Roman says these stories make him want to push for accessibility to quality education.

“The problem is still cash for enrollment. There are between 1.4 and 1.6 million high school graduates every year, but only 700,000 enroll as college freshmen,” he notes.

It doesn’t help that many colleges even impose surcharges for late payments and unexplained miscellaneous fees.

“Hearing the stories convinces me that the Filipino youth can take the country beyond this century,” he says. “You can be sure in good hands ang Pilipinas when they take over business and government. May social consciousness ang mga bata.”

And while Roman waits for things to clear in the LP before he tosses his hat into the senatorial ring, Shalani wishes she could finally get pregnant.

“On the Romulo side, the youngest grandchild is already 18, so everybody is excited to have a new one. My mom is always pestering me about wanting an apo,” she says.