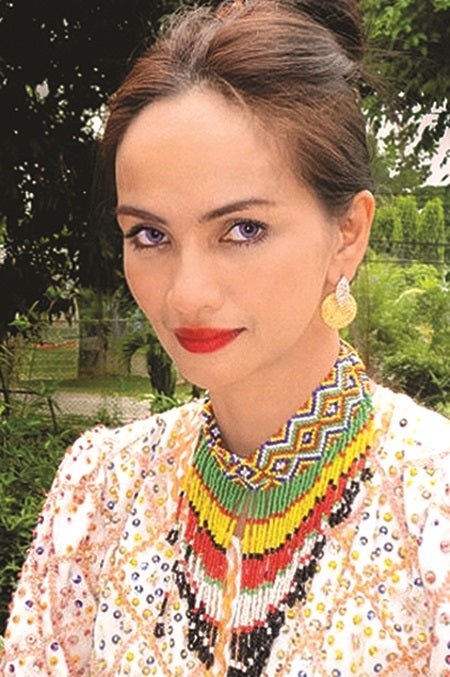 ALLIE Jaafar Wang: “Because of my mixed cultural makeup, I am accepted by both Muslims and Christians.”

A Muslim princess is vying for the Mrs. Universe crown

Every morning, Jay Angelique Jaafar Wang—or Allie, as she is known—wakes up to the sound of dynamite from the Davao Gulf.

From her bedroom window, she can see the fishermen blasting for fish.

“If you ask them why they go on, the fishermen will say they won’t have anything to eat,” she says.

Illegal activities driven by poverty, lack of education, abuse of indigenous people and exploitation of ancestral lands are some of the concerns Allie has been raising in her work.

She is the United Nations Habitat permanent official representative for indigenous peoples’ issues—and the current Mrs. Southeast Asia, a beauty queen title given to a married woman whose advocacy is violence against women and children.

She was selected by MegaStar Productions to compete in Mrs. Universe, a global pageant and forum for women  working in philanthropy and human rights. The event will be held in Minsk, Belarus on Aug. 27.

Allie’s vision is to uphold the rights of her people. According to the Land Registration Authority, there are 5 million hectares of land in the Philippines that are considered ancestral domain.

“The  problem is that the government can’t develop these lands because there is no budget,” she says. “The Indigenous People’s Rights Acts was created to protect them and the environment. My vision is to put up a resource base economy, that is, to have a master plan for their lands which will include an industrial park, economic zone, school and agriculture.”

Born on Sept. 27, 1969 to a Muslim-Protestant family, Allie takes pride in being a descendant of the royal house of Sulu. As the eldest of five siblings, she holds the title dayang-dayang, which means princess of the Tausugs.

Her paternal grandfather, Maharaja Mangone Namli Sajili, was chief of the Tausugs  and a descendant of the Abu Bakrs, a prominent Muslim lineage. Her grandmother came from the royal house of Tawi-Tawi.

Her maternal grandmother, Maria Lourdes Guabong, was the Bae Limpayen or Queen of the Manobo tribe. She married Don Arsenio Sibug, a Kapampangan Protestant, who was sent by the Americans to teach English to the tribes. The Sibugs acquired and developed properties in Kidapawan, North Cotabato.

Her uncle, the late Rep. Joseph Sibug, was named sectoral representative of the tribal people by then President Fidel Ramos.

In 2011, the Sibug clan held a ritual in which Allie was anointed successor of her uncle. She was given the title “Grand Bae” of the Manobo tribe. She was elected president of the Philippine Organization of United Tribal Initiatives Inc.

Allie spends her days traveling the country to assess the state of indigenous peoples. The Aetas in Zambales lack potable water, leaving the children sick. The B’laan tribes in Sarangani live a hand-to-mouth existence. One school book is shared by 30 Bagobo schoolchildren in Mt. Sikaw, Davao.

The Badjaos in Sulu beg on the streets as a way of life and dive for coins tossed by tourists. Many tribal people die in the mountains due to poor nutrition and lack of medical

“Doles  do not solve the problem. Education is needed to raise their dignity and improve their plight,” says Allie.

Although she came from a privileged background, Allie grew up humbly. Living in Tawi-Tawi with her grandmother, her aunts were widows and her cousins fatherless. The men in the family were killed as a result of vendettas.

“My father was known as the Rambo of Zamboanga. He protected businessmen from kidnapping and extortion,” she says.

In high school, she moved to Butuan, Agusan del Norte, to live in a conservative household surrounded by bodyguards.

“If I didn’t come home on time, my uncle would whip me with a .45-caliber pistol,” she recalls.

One day in 1987, she went to the family restaurant-bar and pretended that her father had given her instructions to be given money. She then bought a plane ticket to Manila.

She slept in a dormitory and worked in fastfood chains to support herself and pay for a preparatory course in nursing. When Allie’s father discovered her whereabouts, he threatened to kill any relatives who would help his daughter.

One of them, a 17-year-old student of Don Bosco Technical School, brought her to his home, much to his family’s dismay. The boy’s family was unaware that she was a Muslim princess.

“I learned to adjust to them. I cooked and cleaned the house,” she says.

In 1989, Allie, who was pushing 20, gave birth to her daughter. (The infant grew up to be Toni Jaafar Hipolito, Miss Globe International 2015). Allie’s partner migrated to the United States in 1992 and promised to return. He never did.

Allie completed her double major studies in Nursing at Dr. Carlos Lanting College and Tourism at La Consolacion College. Eight years after fleeing Mindanao, she reunited with her grandmother and was shocked to learn about her father’s fate.

Nonetheless, she resumed being a single and working mother in Manila. After college, she got employed at Celebrity Sports and Country Club, working her way up to becoming top producer in selling club shares. She became a marketing supervisor, then was made general manager. She eventually started a string of businesses.

She recently brought potential foreign investors to Mt. Apo in Davao for a possible geothermal plant and held exploratory talks with the Asian Development Bank.

“My concern is to manifest transparency. I need experts and accountants with pure hearts. If this project pushes through, the indigenous people will have their fair share in their own domain,” says Allie.