From Rolex to buttocks: Nudity comes to home of Swiss watch | Inquirer Lifestyle 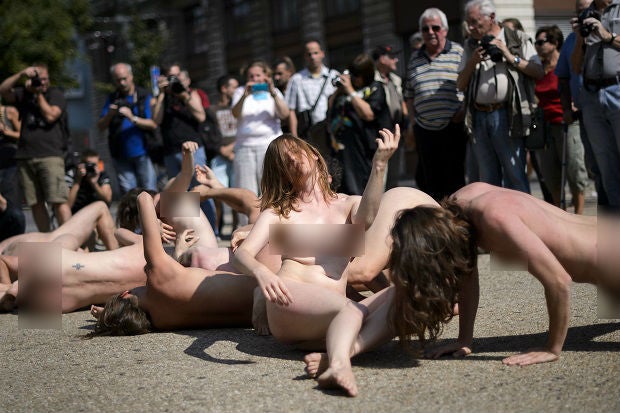 The thirteen-members of the French group "the Collective body" (Le Corps collectif) perform during the "Body and Freedom Festival" which bills itself as the world's first ever festival for naked performing in urban space on August 21, 2015 in Biel, Western Switzerland. The city-wide festival runs from August 21 to 22 and features 17 performance artists from across Europe. AFP

From Rolex to buttocks: Nudity comes to home of Swiss watch

BIEL — The Swiss city of Biel and its peaceable citizens is known as the world capital for watchmaking.

But could the home of Rolex and Swatch also gain an unlikely reputation for naked flesh?

Biel has been hosting the inaugural Naked Performance Festival — an event aimed at challenging notions of what belongs in public spaces.

“Art is welcome today in every city, but nakedness, no!” artist Thomas Zollinger, who created the event ending Saturday, told AFP.

Nudity may be commonplace in galleries and museums, but there remains deep resistance — hypocrisy, according to Zollinger — to seeing it in the streets.

“The body is an accepted medium of art (in public)”, he said. “But why not the naked body?”

Persuading the Biel authorities to host the event took some work, he added, but the first day of the festival on Friday was completely “peaceful.”

A row of burghers formed around a group of nude women contorting themselves on the road, while, in another location, an elderly man looked away as several performers sat in their birthday suits on a line of folding chairs.

On his website, Zollinger said that in conceiving the piece he wanted to work “with naked bodies in a comprehensive way whereby pedestrian circulation (and) the architectural environment…are also an integral part.”

Zollinger, who lives in Biel, has run the Ritual Theatre group since 1991, and has produced a number of performances based on nudity across Europe in recent years.

The day I went topless on the LRT