Stormy but merry opening night for ‘Singin’ in the Rain’ | Lifestyle.INQ ❮ ❯ 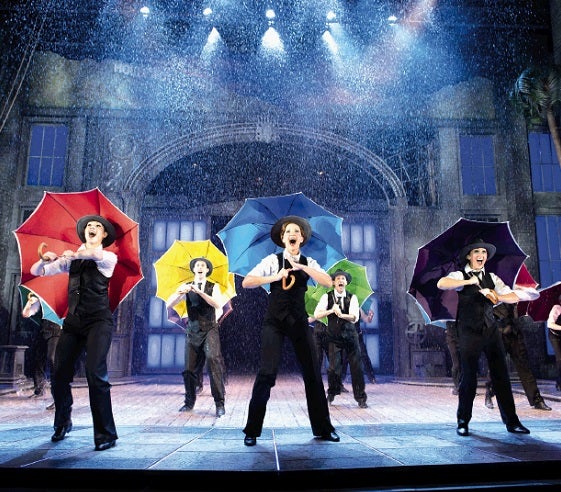 Stormy but merry opening night for ‘Singin’ in the Rain’

WHILE Typhoon “Ineng” lashed at just beyond the northern tip of Luzon, drawing the southern wind and dampening the spirits of long-weekenders inching their way out of the city, falling water was eliciting a different kind of reaction at The Theatre at Solaire Resort and Casino in Pasay City on the night of Aug. 20.

Instead of groans and gritting of teeth there were gleeful exclamations and glorious laughter at “Singin’ in the Rain.”

It was the opening night of this Lunchbox Theatrical production. With Concertus Manila, Michael Cassel Group, David Atkins Enterprises and Pieter Toerien Productions, it continued the musical’s successful adaptation to stage, after being revived for the fifth time in London in 2012.

The musical is based on the 1952 film starring Gene Kelly and Debbie Reynolds, which is still well-loved for its humorous look back on the moviemaking scene of the late ’20s, when sound was only breaking ground, starting with “The Jazz Singer.”

With Donald O’Connor, Kelly and Reynolds will be etched on our minds forever as they are pictured on the movie poster: walking toward the viewer wearing bright yellow raincoats under colorful umbrellas in mid-song.

The story brings audiences back to a bygone era, with the flowing knee-length dresses, cozy fur trims for women, and double-breast vests or short suits over Oxford bags for the men.

The costumes and the set depicting old Hollywood make for a classic show and a little of the glitz associated with moviestar status.

The South African cast was—how would a ’20s Hollywood cat say it?—swell. Splendid. No, stupendous! This musical being a classic, it would seem the actors could do no wrong.

The songs—“All I Do Is Dream of You,” “Make ’Em Laugh,” “You Were Meant for Me,” “Good Morning,” “Would You”—form a string to the past we hold on to in reminiscing on a rainy day.

Pietermaritzburg native Duane Alexander, an alumnus of South African productions of “Cats” and “Joseph and the Amazing Technicolor Dreamcoat,” personified the blockbusting blunderbuss superstar Don Lockwood, including his rendition of the title song and the performance of the accompanying iconic dance scene, drenching the audience with the flow of his movement and the pitter-patter of his tapsoles.

Bethany Dickinson of “Carousel” and “The Sound of Music” (both Cape Town productions) won our hearts as the melodious Kathy Selden. Her voice was as soothing as a balm on ears bruised by day-to-day buzz.

Van Wyk is a veteran of the South African stage, having started his career as Gavroche in “Les Miserables” when he was just 10.

Together the three brought back the heartwarming scenes of the original movie, especially for “Good Morning.”

Director Jonathan Church brought forth the essence and spirit of the film even with “very little freedom” on the script.” It was Church who successfully revived “Singin’ in the Rain” for the Palace Theatre in London in 2012. Taryn-Lee Hudson gave life anew to the funny and fabulous Lina Lamont, a role that scored an Academy nomination for its original performer, Jean Hagen. Lamont is not the vile vixen we are all used to in love triangles. The humor she provides as the bumbling bombshell contributes a lot to the comedy, and Hudson gave her a comically shrill glamour-girl drawl to boot. The Theatre at Solaire was a great choice for a set that was complicated by actual water sprinkling from the rafters and equipment beams above the stage.

At some point, one wondered how all that “rain” would affect its top-of-the-industry facilities, especially the Constellation sound and projection equipment which, respectively, suffered a little grain and temporary glitch after the title song, when the first downpour occurred.

Production and cast carried on only after a brief recess, to the relief of the anxious audience.

At curtain call, on that dreary night hit by intermittent thunderstorms, only applause thundered from the theater’s 1,800 seats. The audience, which included some of the Who’s Who of Metro Manila, was impressed, its thirst for nostalgia and night of fun more than satiated.

It may be said that singin’ and the rain are two great equalizers. What more a combination of both?