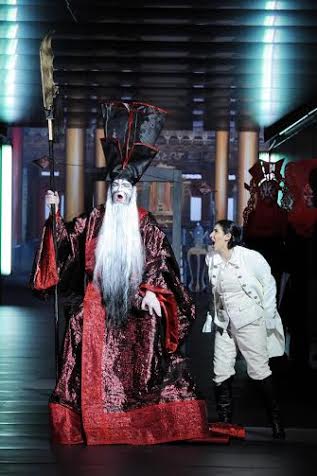 Jeffrey Ching’s new compositions to premiere this week at CCP

To be given its first Manila performance are his compositions “Celestial-Infernal Grand Nuptial Rite” as well as transcriptions of Schumann (“Kundiman ni Schumann”) and Wagner (“Wesendonck Sonata”).

The first work was premiered in Berlin last May 2 in a chamber orchestra version by the Landesjugendensemble Neue Musik Berlin, conducted by Gerhard Scherer, with Andión, the  composer’s wife, and De Oliveira Pinto as soloists.

With his Schumann arrangements, Ching worked with existing material from 19th-century Germany.

“The challenge for me as a composer was to enrich and expand them while staying true to their original inspiration,” Ching said. “‘Kundiman ni Schumann’ will be particularly interesting to a Manila audience because it transforms two of the German Romantic composer’s instrumental pieces into settings of the Tagalog poetry of his Filipino contemporary, Francisco Balagtas.

“But ‘Celestial-Infernal Grand Nuptial Rite’ is a wholly new work and a fresh departure for me in terms of compositional method. Although it is a vocal piece, there is, most of the time, no decipherable text.”

The score of “Celestial” was inspired by William Blake’s “The Marriage of Heaven and Hell,” said the composer.

“But you hear none of Blake’s words in it at all,” he added. “The voice and cello parts are written out in great detail, mostly in unsynchronized durations in seconds without barlines or meter. So each performance is different. Performed as a duo, the piece is self-sufficient, but it can also be done with any available accompanying instruments (by musicians), who have virtually no written music to play from, but instead freely interpret verbal instructions, much of the time making music up as they go along and reacting to what they hear the duo do.”

Manila audiences will hear the version for voice, cello and piano.

Ching’s opera, “Das Waisenkind” (The Orphan), had won the Audience Prize in the Theater Erfurt 2009-10 season, where it was premiered.

“By and large, ‘The Orphan’ became the most popular opera production by audience vote,” Ching recalled. “It is gratifying because it won over Handel and Tchaikovsky by a wide margin—and that is astounding for a new, maybe even confusing score—in seven languages!—that had never been heard before.

“However complex my pieces may seem to be, they are already the simplest that I could make them—both for the performers and the listeners—and, after all, my ultimate objective is to address the heart and mind as directly as possible about the great questions and mysteries of our universal human condition.”

Germany has become a new haven for contemporary music.

“In Germany, contemporary music, both instrumental and operatic, is understood—correctly in my opinion—as growing directly out of the same classical traditions that produced all the great composers from J. S. Bach to Richard Strauss,” she said. “And therefore state and society feel a moral obligation to support new music, however difficult to appreciate on first hearing, because logically it is the only way the world can continue to nourish the Bachs and Strausses of the next generation.”

How has he evolved as a composer?

“I have explored many compositional approaches over the years—fugue, canon, sonata form, microtonal Chinese and Japanese music, Balinese gamelan, Brazilian candomblé, 12-tone and aleatory composition, to name but some—and I remain ever-curious about what other musical traditions can teach me. But, after all, I am no longer 20, and in a sense the present phase of my creative development should tend equally toward introspection and consolidation.”

For tickets to the world premiere of Jeffrey Ching works, call CCP Box Office at 8321125.