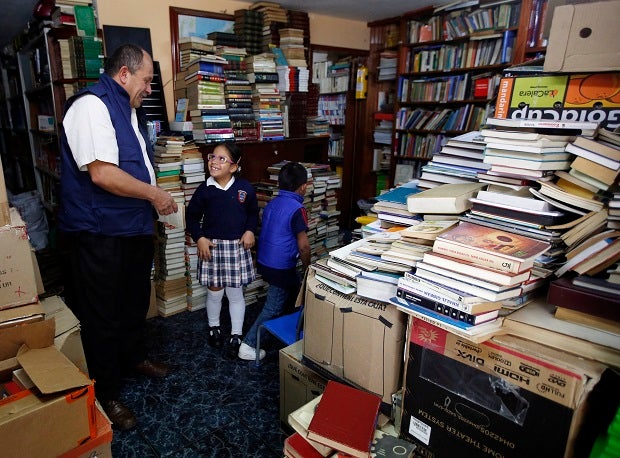 In this Aug. 19, 2015, photo, Jose Alberto Gutierrez, left, talks to children visiting his library at his home in Bogota, Colombia, Wednesday. The reading material slowly piles up, and now the ground floor of his small house is a makeshift community library stacked from floor to ceiling with some 20,000 books, ranging from chemistry textbooks to children's classics. AP

BOGOTA, Colombia — A second-grade education has not stopped garbage collector Jose Gutierrez from bringing the gift of reading to thousands of Colombian children.

Gutierrez started rescuing books from the trash almost 20 years ago, when he was driving a garbage truck at night through the capital’s wealthier neighborhoods. The discarded reading material slowly piled up, and now the ground floor of his small house is a makeshift community library stacked from floor to ceiling with some 20,000 books, ranging from chemistry textbooks to children’s classics.

He says books are luxuries for boys and girls in low-income neighborhoods such as his, with new reading material at bookstores too expensive. There are 19 public libraries in Bogota, a city of 8.5 million, but tend to be located far away from poorer areas.

“This should be in all neighborhoods, on each corner of every neighborhood, in all the towns, in all departments, and all the rural areas,” says Gutierrez. “Books are our salvation and that is what Colombia needs.”

The 53-year-old Gutierrez has a love of reading he attributes to his mother, who always read to him even though she was too poor to keep him in school.

“She used to read me stories every night,” said Gutierrez, who has traveled to book fairs in Mexico and Chile to share his experience of starting a library with discarded reading material. “To me, books are the greatest invention and the best thing that can happen to a human being.”

While Gutierrez still sifts through the rubbish for additions to his library, his fame as Colombia’s “Lord of the Books” has also brought him thousands of donated tomes that he’s sent to other libraries around the country because he doesn’t have room for them all.

Gutierrez is an avid read of works by authors such as Leo Tolstoy, Victor Hugo and Mario Vargas Llosa. His favorite books include “One Hundred Years of Solitude” and “The General in his Labyrinth” by Colombia’s Nobel Prize-winning novelist Gabriel Garcia Marquez.

He says he doesn’t reject technology that allows books to be read digitally, but says he prefers to read the printed word on paper.

“There’s nothing more beautiful than having a book in your pocket, in your bag or inside your car,” he says.