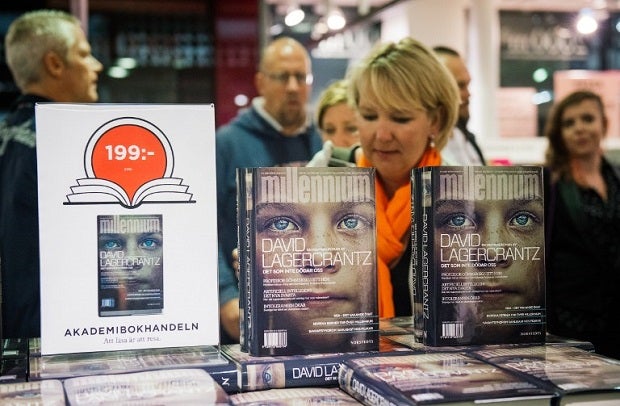 People buy the first book of the fourth novel in the Millennium series of crime novels, originally by Stieg Larsson, The Girl in the Spider's Web, written by Swedish journalist and best-selling author, David Lagercrantz, on August 26, 2015 at a local book store in Stockholm during a midnight sell. AFP PHOTO

STOCKHOLM, Sweden—David Lagercrantz wrote the highly-anticipated sequel to Stieg Larsson’s best-selling Millennium crime trilogy in a manic depressive state, he told reporters on Wednesday, amid controversy over the decision to continue the series.

“I’ve been terrified … and I used to say that I was bipolar, manic depressive all the time and I think it was kind of a good thing to write” in this condition, he said.

“The Girl in the Spider’s Web,” which goes on sale in 25 countries on Thursday and in the United States on September 1, picks up the trail of tattooed computer hacker Lisbeth Salander and journalist Mikael Blomkvist.

“I was not the easiest person to live with because I was thinking about it all the time. I’m scared to death that I won’t live up to” Stieg Larsson, who created the trilogy but died suddenly of a heart attack in 2004 at age 50, before the series gained global fame.

Larsson’s three Millennium books, published in 2005 to 2007, have sold 80 million copies worldwide and have been made into Swedish and Hollywood movies.

Lagercrantz, who gesticulates wildly while speaking and is fond of superlatives, was visibly anxious about how his book will be received.

“This was the passion of my life and now you can judge if I succeeded, but God I did my best,” he said.

Dressed in a dark suit, he described the “fever” that overtook him as he wrote, and how he really enjoyed developing the characters.

“I dream of being Mikael Blomqvist. He’s a nice guy with great values,” he said.

Stieg Larsson’s father Erland Larsson, sitting in the front row, looked on, his expression alternating between amused and serious.

While many fans have longed for the fourth instalment, some people are not happy about the book.

Among them is Eva Gabrielsson, Stieg Larsson’s partner of 32 years until his death.

The couple were not married and Larsson left no will, so his estate went to his brother and father. Gabrielsson, 61, lost a bitter battle with them to manage his work.

In an interview with AFP in March, she called Lagercrantz a “totally idiotic choice” to write a sequel, saying he knew nothing of the milieu Stieg Larsson described in the books.

“They say heroes are supposed to live forever. That’s a load of crap, this is about money,” Gabrielsson said.

“It’s about a publishing house that needs money, (and) a writer who doesn’t have anything to write so he copies someone else,” she lamented.

He has a “special talent for depicting the world of others,” said Norstedts head Eva Gedin, who edited both Larsson’s and Lagercrantz’s Millennium books.

She insisted the novel “is David Lagercrantz’s book, not a copycat.”

Erland and Joakim Larsson have pledged that the royalties from the book will go to the antiracist magazine Expo co-founded by Larsson.

The pair are among the few who have already read the new book, which they have lavishly praised.

“I kept it on my nightstand for a week before I opened it. I was a little afraid. But once I started, it was impossible to stop,” Joakim Larsson told AFP.

The writing of the book has been shrouded in secrecy to prevent leaks about the plot. Only a few people have read it so far.

Media interviews with Lagercrantz ahead of Thursday’s launch have been subjected to rigorous confidentiality agreements, angering some outlets, including a Danish daily which has boycotted Lagercrantz because its literary critic was not allowed to read the book before interviewing him.

Norstedts has only revealed that the characters uncover “world shattering information on US intelligence services.”

Before, “the worst hacking attack was done by the outlaws and now it’s by the state and the intelligence (services). We live in a world where we need Lisbeth Salander more than ever,” Lagercrantz said.

Despite all the precautions, a newspaper kiosk at Stockholm’s central station put the book up for sale on Wednesday, a day early, before being ordered by Norstedts to remove it.