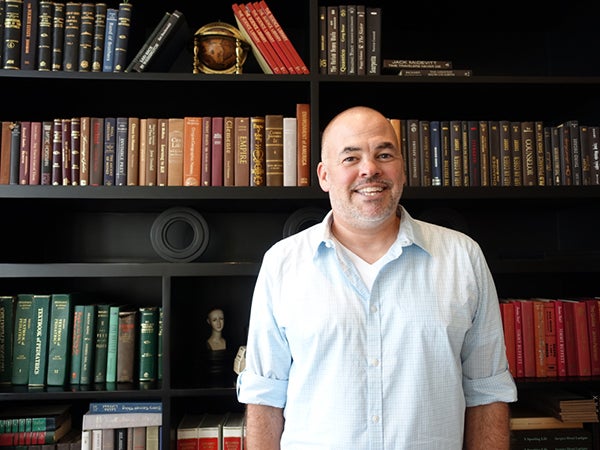 The good luck of being Matthew Quick

Author Matthew Quick is one of the novelists flown in by National Book Store for this year’s Philippine Literary Festival, and Mitch Albom may have had something to do with his saying “yes” to coming to Manila.

“My publisher told me Mitch Albom had been here last year, and they said he raved about it. They said, ‘You have to go, he had such a great time.’ I love to travel, I love meeting new people, so they didn’t have to twist my arm too much. I especially love meeting people from other countries who read my work—the fact that my work traveled around the globe is something I never could have fathomed when I was in my 20s. It’s a great honor to be here.”

Quick is the author of “Silver Linings Playbook,” which rose to popularity when David O. Russell adapted it for the big screen, where it was nominated for numerous Academy Awards. It was the movie that earned Jennifer Lawrence her first Oscar for Best Actress. He has written five more books after “Silver Linings”—“The Good Luck of Right Now,” “Love May Fail,” “Sorta Like A Rock Star,” “Boy 21,” and “Forgive Me, Leonard Peacock.”

Inquirer Super sat down with him before his book signing this Sunday (see details below), where he talked about his great leap of faith (he quit his job and sold his house in 2004 to become a full-time novelist), what a good guy Bradley Cooper is, getting flak for writing about a suicidal dog, getting over his “academic snobbery,” and why he signs his books with a green Sharpie.

You mentioned in an interview that quitting your job to write a novel in your 30s was viewed by most as a criminal act; how did you feel after “Silver Linings Playbook” was published?

(Laughs) I don’t know. I guess when I started to write, I wanted to figure some things out for me, like what was going on in my chest, in my mind, and I thought the people in my life would really understand when they read my books. That’s not always the case.

It was funny when people discouraged me from writing; they were very much worried about my financial stability. My father’s a banker, he doesn’t understand art at all, he understands money. He’s very proud of me now and he’s a big fan, but there’s a part of me that still feels a gap because I don’t equate the value of my books or the value of my art with money and a lot of those people they do. They say, “OK, now you’re an artist because you have so much money, or people paid you this amount.”

I don’t think that’s necessarily true. I felt like I was making good art when no one was paying me, so that can be a little frustrating. I never have felt, like, really happy I proved somebody wrong. I’m just always grateful when people read my work and enjoy it and really connect with it, it’s often a surprise. It’s not necessarily the people in my life, but oftentimes strangers who really get it, and that is very gratifying.

Do you still write in your in-laws’ basement?

(Laughs) No, not anymore. That was something I did very much out of necessity. I’d quit my teaching job and sold our house. My wife and I had very little money, so my in-laws let me live with them while I started writing, which was a tremendous gift. But the first thing I did when we got the “Silver Linings” movie money was to move out of my in-laws’ place and get a little apartment, and now we have our own house in the outer banks of North Carolina. It’s near the Atlantic Ocean. It’s nice. I have an office and it’s my own little space, that’s where I write now. 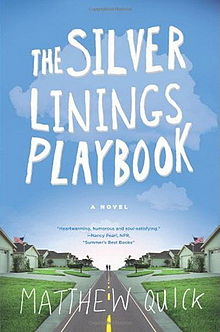 How did you celebrate getting “Silver Linings Playbook” published?

When I got the actual book, I went out to a park and read the entire book in one day, just by myself, and held the copy in my hand, just to say, “This is real.” I try to take a little time to appreciate the accomplishment, because when you publish, s everybody weighs in with opinions. You get reviews, and sometimes it can be wonderful, sometimes not, but the book starts to feel less and less yours. That’s why it was really important for me to spend that time just alone with the book. My wife and I are kind of quiet people, and whenever we get good news we like to open a good bottle of scotch and celebrate very quietly.

You mentioned anxiety attacks over “Silver Linings.” Does that mean you don’t Google reviews?

I do, obsessively (laughs). My wife has been trying to get me to stop. I still do. Over the years, you realize that whenever you put any art into the world, you’re going to have people that like it, people that don’t like it and sometimes it’s just personal reasons. It never really gets easier. I know a lot of writers who wear one face in public, but in private we are pretty neurotic about reviews.

Was Nate Vernon a composite of your past life as a teacher?

I think he’s very much inspired by the work that I did. I wouldn’t say he’s exactly me, but the paper airplane lesson he does in the book was something I used to do. That was one of my lessons, but I did it in a slightly less dramatic way. I think Nate Vernon was more of a performer as a teacher than I was, but he was definitely inspired by my ideals, what I believed in as a teacher, both in the classroom and after leaving the classroom too.

Tell us about Albert Camus. The suicidal poodle, not the author.

(Laughs) I have a Scottish terrier, whom I love. He’s my buddy, his name is Desi. My uncle, who’s not with us anymore, always had crazy dogs, and he had a Jack Russell who was just nuts. It literally jumped out of a second-story window. It didn’t die, just broke its leg, but it would do wild things, like jump out of windows or cars. I wanted to put Nate in this position that was almost like an existential comedy—it was so absurd how bad his life was getting and so to me, as much as I was a dog lover, I needed to take him to that place where he was completely broken. But I’ve caught a lot of flak for that, from friends or fans. “I can’t believe you, you killed the dog.”

Was it your teaching background that made you decide to write YA?

When I went to grad school, I did my MFA in Creative Writing, I went to a school called Goddard, a very liberal place, kind of a hip place, but I think I picked up some academic snobbery there. In the US, some people think YA is not serious literature. I had this idea that I was an “adult” writer, a very serious writer, which is ridiculous, right?

I remember my agent said, “I think you should write YA.” “I don’t write genre,” I said, all snobby, and he rolled his eyes and said, “Catcher in the Rye was YA.” Looking back, it was the best career advice that anyone’s ever given me. Once I kinda got over that ridiculous stigma of who I was as a writer, I really fell into it.

It’s tricky because what I do with a novel is so different from what movie people do, but I love film and I’m writing a screenplay right now for The Weinstein Company. I’m getting more involved with film. The question really is, do I start working on my own adaptations or not? There’s also part of me that realizes that you have to let go of so much to do that in order to be objective—it’s kind of like taking your baby and slicing it up and taking parts.

You weren’t involved, but you visited the set, right?

Bradley Cooper is a nice guy, too. He really is. He plugged the book in all his interviews, which meant a lot to me. When I went to the movie set, he was the first person to walk over and shake my hand. He came over and said, “Hey, I’m glad you’re here.” He was super cool to me on set. He seemed pretty genuine.

I watched this scene where Bradley’s running and he runs into his buddy and Julia Stiles is in the window and they’re yelling about whether he’d come back for dinner. They did that scene for like eight hours, but in the movie it was maybe like, 20 seconds?

What advice do you have for future full-time novelists who haven’t taken the plunge yet?

When I first started, I used to say to people, “It happened to me, so it can happen to you.” I still believe that. I think that if you put your best out there, if you figure out who you are and you u tell stories that are authentic, things can happen, you know?

What I’ve learned since publishing is, a lot of times you don’t realize what you’re getting into. When I was writing “Silver Linings,” I could never imagine it would lead to me going to Manila and doing media for five days, and that’s not for everybody.

The writing life is a great life, but it requires a lot of skills that I think most people aren’t ready for. For people who are starting out, I would say, it’s really important to figure out who you are, to have a firm grasp of exactly what you wanna do, and to be realistic about that. If it’s in you to write a book, that’s beautiful, and no one will be able to dissuade you. You’ll just do it, and at some point you’ll stop and there’s nothing wrong with that.

You already moved to North Carolina—you’re not switching football teams?

(Laughs) No. You don’t do that, you’re not allowed to. It’s funny, my neighbor in North Carolina is also an Eagles fan, he’s from Philly. It’s like, wherever you grew up, you just keep that team.

My silver lining, I would definitely say, is my wife. I met my wife when I was 19, she was 17, and I didn’t realize what an important moment that was at that time. Alicia edits all of my work, she’s definitely my best friend and I don’t think I would have ever made it this far without her. I think that the silver lining to that story is that even if all the fame, the book sales, everything went away, she’d still be there.

Catch Matthew Quick’s book signing event at The Philippine Literary Festival on August 30, 2 p.m. Visit National Book Store on Facebook for event updates, http://bit.ly/nationalbookstore and follow them on Twitter/Instagram: @nbsalert. Use the hashtag #PLF2015 to join the discussion.