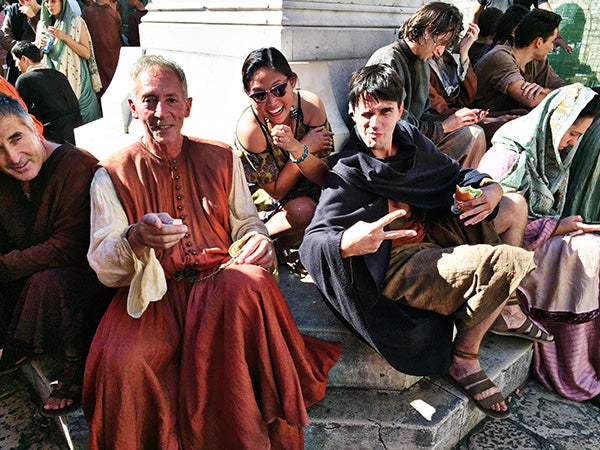 TESSA with Game of Thrones extras

Diary of a traveling fangirl

I had just gotten off the tour bus in central Belfast. It was my second “Game of Thrones”— themed tour in the two-and-a-half days I’ve been in the capital of Northern Ireland. I was pursuing a tip on where the cast could be hanging out when I saw him.

At first I thought my mind was playing tricks on me, after a full day of absorbing all things “Thrones.” But after a second look, there was no denying it. The curly jet-black hair was unmistakable. I was standing in front of Jon Snow.

It seemed like a fitting conclusion to my world tour of “Game of Thrones” (GOT) filming locations that has spanned three years: to stand and look at the actor playing my favorite character.   Only, I’ve come too far to just gawk. If there’s something I learned from the series, if you want something bad enough, you have to seize it.   So I did.

The hit HBO show was born of a series of fantasy novels by American writer George R.R. Martin. The ongoing saga revolves around the past and current history of the mythical continents of Westeros and Essos. The focus of the story has been on the highly contended Iron Throne, from which the occupant rules the Seven Kingdoms of the land, as well as the surrounding story lines of the characters associated with it.

It was early spring when my husband Glen and I visited Iceland, a seemingly perfect setting for the “A Song of Fire and Ice” series.   After all, this small island nation at the rim of the frigid Artic Circle has numerous active and inactive volcanoes, with eruptions as recent as a few months ago.

At the time of our trip, we were aware of the show but hadn’t watched a single episode. Our tour group hiked along the outer portions of Svinafellsjokull, an outlet of Vatnajokull, the largest glacier in Europe.   The sun was starting to fade when we got there. A memorial for two young German travelers who were lost in the icy wilderness made us mindful not to stray from the path.

The rocky mountainside that bordered the immense glacier was the most rugged place I’ve ever been.   Our guide talked about how the HBO cast and crew came to Iceland to film scenes set Beyond of the Wall.   This was a fictional region north of a 700-foot barrier of solid ice 300 miles long, constructed to defend the Seven Kingdoms.   Only when I saw Seasons Two and Three later did I fully appreciate walking on the terrain where Jon Snow and the Men of the Night’s Watch encountered Ygritte and her fellow Free Folk, also known as Wildlings.

Another filming location we unknowingly visited was the Þingvellir National Park. Named a Unesco World Heritage Site, it forms part of the most visited sights in the country called the Golden Circle.

We walked on a path beside an imposing craggy ridge as we wrapped our heads around the fact that the area was where the European and North American tectonic plates drifted from each other.   The coarse landscape was softened by streams of sparklingly clear glacier water.   It wasn’t hard to see why the area was chosen by the show’s producers as a fitting background for several onscreen journeys, often arduous and perilous.

Like Iceland, our visit to the Andalusian city of Seville preceded our discovery of the show. Nevertheless, it was just as fascinating to see the grand royal palace of Alcazar on the show as Sunspear, the seat of House Martell.   I have to sometimes remind myself that it’s places like these that inspire writers and filmmakers to come up with fantastical palaces and castles in their work, and not the other way around.

The intricately elegant Moorish architecture and design of the buildings and their sumptuous gardens were a sight to behold.   I noticed that visitors like myself walked slowly in and around the palace as if possessed by a regal spirit, taking in every tile and arch thoughtfully and contemplatively.

Renowned as one of the most beautiful palaces in the world, the Alcazar of Seville was well suited to represent the capital of Dorne. Its dignified air was befitting the fictional city’s pedigree as the only land joined to the realm by marriage rather than by conquest.

Spain appears to have enchanted the HBO producers, as filming for Season 6 has been planned in the coming months in Girona and Almeria, among other places.

The exotic land of Morocco has long held a veil of mysterious allure. From the expansive Atlas Mountain range to the reaches of the Western Sahara Desert and on to the fascinatingly confusing nooks and crannies of its fabled cities Marrakesh and Fes, the country is photogenic from any angle.

During our 15-day tour of the country last March, we stopped at two places that were used to depict locations in the continent of Essos, where the silver-haired Daenerys Targaryen was working on the logistics of her plan to claim the Iron Throne.

One look at the earthen buildings of Ait Ben Haddou and you knew you’d seen it in a movie or two. It has an impressive connection with Hollywood, both old and new, having seen filming of landmark movies like “Lawrence of Arabia,” “Jesus of Nazareth,” “Gladiator” and “Prince of Persia” on its streets and buildings.

In “Game of Thrones,” it was transformed with the help of some movie magic into Yunkai, a city-state of Slavers’ Bay. We stayed at La Fibule D’or, a family-run inn overlooking this Unesco World Heritage Site. Our group was warmly received by the inn’s owner, a gregarious fellow who likes to go by his screen name, Mr. Action.   He has been an extra on the show as well as other movies that were filmed in his town.

Moving towards the coast, we came upon Essaouira. This picturesque fortified city doubled as Astapor, where Daenerys Targaryen meets the Unsullied soldiers through a heinous slave trader. The 18th century seaside ramparts, including the distinctive square tower, were prominent in scenes from Season 3.   Standing in the middle of the round cobblestone Scala of the Kasbah, I felt a palpable energy as I heard my voice echo and reverberate.   The experience made channeling my inner Khaleesi quite memorable.

Dubrovnik, dubbed the Pearl of the Adriatic, has long been popular among conquerors and cruise ship tourists for its strategic location and innate charm.

It has played King’s Landing to perfection. The medieval walled city, one of the best preserved in the world and yet another Unesco World Heritage Site, aptly provided the grandeur necessary for the capital of the Seven Kingdoms.

By the time we visited Croatia, we were avid fans of the show and planned our trip around our fascination for it.   We booked the “Game of Thrones” Walking Tour through Viator. Our guide Anna, who herself had been an extra for the show, took us to key spots. There were many excited oohs and aahs as she revealed with her reference photos what scenes were filmed there.

Among the prominent Dubrovnik landmarks that made their appearance on the show were Lovrijenac Fort or St. Lawrence Fort and the harbor right below it, Minceta Tower, the grand Baroque stairs leading up to the Church of St. Ignatius as well as two of the City Gates, Pile and Ploce.

Not to be outdone, the city of Split, found three hours north of Dubrovnik, has its own allure that drew the Roman Emperor Diocletian to build his retirement home there by the Adriatic. The vaults of Diocletian’s sprawling palace complex turned out to be the perfect place to house growing dragons.

Luck was on our side, as filming was ongoing during our time in Croatia.   We saw active sets in Dubrovnik with elaborate props to depict various corners of the capital, including the squalid slums of Flea Bottom.   It was exhilarating to come as close as one can get to walking in fictional King’s Landing.

On our last day, we happened upon the extras’ holding area for a scene that they were shooting for the tail-end of Season 5. Croatians and other Europeans sat around in costumes that identified them as either Sparrows or King’s Landing citizens, as they waited to be called to work.   We sat by a group of friends who took time off from work and traveled from the capital of Zagreb to be part of their favorite show. They shared their experiences animatedly. Their enthusiasm was palpable, their pride completely understandable.

While the city was abuzz with the cast being in town, we had no major star sighting. The closest we got was when a pair of travelers from Miami that we met told us they saw Lena Headley, who plays the deliciously wicked Cersei Lannister, sunning herself poolside at their hotel.   My husband had to dissuade me from casually dropping by the said hotel, lest we missed our outbound bus.

Tessa Mendoza Cruz is currently obsessed with HBO’s hit series “Game of Thrones.” Over the last three years, she has combined her love for the show and her passion for traveling, with the most spectacular ending. She is the founder of the travel blog Viajera Filipina where she seeks to inspire Filipinas (and everyone else) to get out and see the world.