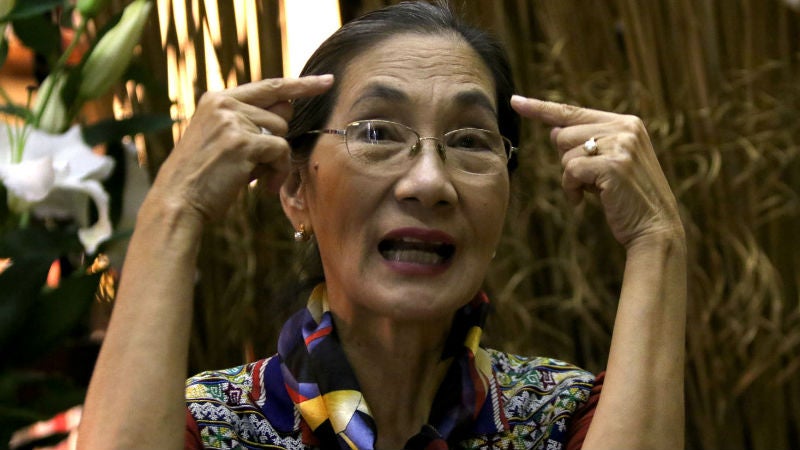 IT’S INTERNAL MUSIC Cultural worker, dance scholar and Ramon Magsaysay 2015 awardee Ligaya Fernando-Amilbangsa says the slow cadence of the “Pangalay” dance is derived from one’s inner rhythm and music, “the complete integration of the body and the breath.” RICHARD A. REYES 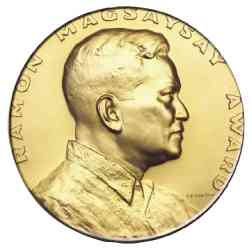 At 72, Ligaya Fernando-Amilbangsa walks with a cane like many elderly folk her age. But when she dances, the decades simply vanish.

There was no music when the 2015 Ramon Magsaysay awardee and celebrated dance scholar obliged on Friday with a short demonstration of what has become her life’s work: the Pangalay, Sulu’s once endangered dance that was saved from extinction through her efforts.

Amilbangsa needed no beat, no rhythmic count nor the clanking of the kulintang that usually accompanied a Pangalay performance. To give life to this intangible treasure, she had to listen only to the cadence of her breath.

Slowly, she dipped and rose, her hands stretched out as her fingers flicked inward and out. She turned and bent forward at an angle, her regal form sculpted by four decades of study, documentation and practice.

She added: “You count by your knees. One deep breath, one dip. When the dancer flexes the knees, that’s the exhale. You cannot do anything abruptly. It’s a complete integration of the body and the breath.”

Amilbangsa was introduced to the Pangalay in 1969 when she saw a group of dancers performing it during a visit in Jolo, Sulu province. She has never looked back since.

The Marikina lass married Datu Punjungan Amilbangsa and moved to Bongao, Tawi-Tawi province, in 1973, where she made the preservation of Pangalay her lifelong crusade.

Her passion for the Pangalay, which translates to “gift offering” or “temple dance” in Sanskrit, couldn’t have come at a better time. The slow dance provided breathing space in the midst of the secessionist conflict that wracked Mindanao in the 1970s.

“[The message of the Pangalay is] peace,” Amilbangsa said. “(The) No. 1 (message) is serenity. It’s very slow. While the traditional musical accompaniment for it is very fast, the dance (itself) is very slow. Those untrained in such rhythms find it difficult to adjust initially because they have not yet internalized its slow rhythm.”

Indeed, the Pangalay dance, known to be centuries old and predates the Spanish conquest of the Philippines, is in many ways a reflection of the reality of the Sulu peoples.

For one, its slow movements, similar to the gentle flowing moves of tai chi or even yoga, provide a stark contrast to the Pangalay’s upbeat music, seemingly speaking of how locals have had to live their lives: finding serenity amidst the noise of conflict.

“The (Pangalay) was a unifying force at the time of martial law, a chance for dancers to come together. When we had performances, I would talk to the CO (commanding officer in the area),” Amilbangsa recalled of her dance troupe’s adventures in the ’70s.

“And I brought (the dancers) to Manila,” she added. “We would hitch a ride in the C-130 (military plane). And before our performances, we had the teeth of our dancers fixed. We made sure they were well-nourished so that they looked good onstage,” she said, smiling at the recollection.

Performing outside their communities also gave the Sulu dancers a chance to project “a favorable” image of their tribes, (to show) “that they are not backward.”

As Amilbangsa put it, Pangalay’s rich vocabulary of around 40 poses and gestures showed the sophistication of Sulu culture.

“A dance is many things, like a microcosm of culture. You look at the dance of a people and you can tell right away the level of their culture. If it’s backward, then the dance is just stomp, stomp,” she said.

“But in the Pangalay, the poses are very dignified. And the sophistication of the musical instruments, the costumes that are embroidered—they are so beautiful,” she added.

The dance also mimics the movement of water, the environment of communities where the Pangalay thrives. In Amilbangsa’s words, the Sulu archipelago “looks like stepping stones” toward neighboring Sabah.

“The (Sulu) people build their homes near the water. So even their dancing is like the flow and ebb of the tide. There are no vigorous movements, or else you fall. You cannot do vigorous movements on a lepa (house boat),” Amilbangsa said.

Her devotion to the dance led the Ramon Magsaysay Awards judges to recognize Amilbangsa for “her single-minded crusade in preserving the endangered artistic heritage of southern Philippines, and (for) creatively propagating a dance form that celebrates and deepens the sense of shared cultural identity among Asians.”

“All awards are big as awards go, but some are more important than others. This is an important award. They say it might open new doors for me, maybe as a cultural warrior. I hope so. (But) even if I didn’t get this award, I think I’d still (continue) with my work,” Amilbangsa said.

Apart from documenting the Pangalay’s history in books and ensuring its preservation through instructional guides, this culture scholar added her own innovation to the dance when she introduced the use of masks in performances in 1993.

While the traditional dance required dancers to have blank expressions and convey their message through their bodies, Amilbangsa added “instant characterization” through the use of masks.

“If I need to look flirtatious, I will just change the mask. Or if when there’s no male dancer in the group and there is a male character in the dance, I use a male mask. Sometimes we use double or even triple masks,” she said, recalling the first time she used masks to represent three characters in a performance in South Korea.

To continue propagating the dance, Amilbangsa is currently working with three groups—in Tawi-Tawi, in Iligan City and in Marikina.

In the Marikina dance school, Amilbangsa’s dancers are non-Muslims enticed to learn the Mindanao dance.

“That’s the nice thing about it. This is a dance in (Muslim) Mindanao, but those who would like to learn it are Christians. And (that’s) good. It bridges the gap where there should be no gap at all,” she said.

Amilbangsa said the Pangalay should not be called a Muslim dance, which assigns it to a particular religion. Instead, it should be described by its geographical origin, which is the Philippine south.

Calling the Pangalay the closest Philippine dance to a classical form, Amilbangsa hoped her latest accolade would generate greater interest and spur support for the preservation of the dance.

“I want it to become a national symbol. Because of its antiquity, there’s no other dance we can compare to it,” she said.

“I (did) not expect anything, but now, with the award, I hope there will be more performance venues, more invitations for the group to perform, and for artists and performers to get something out of what they are doing because they are so dedicated,” Amilbangsa said.

The energetic and untiring Amilbangsa has several projects in the offing: a revision of her Pangalay book and new instructional materials for the dance set for next year, and her memoirs “maybe in two to three years’ time.”

“(The memoirs) are finished, but I probably have to rechapter,” said Amilbangsa, who still uses her trusty typewriter to write manuscripts.