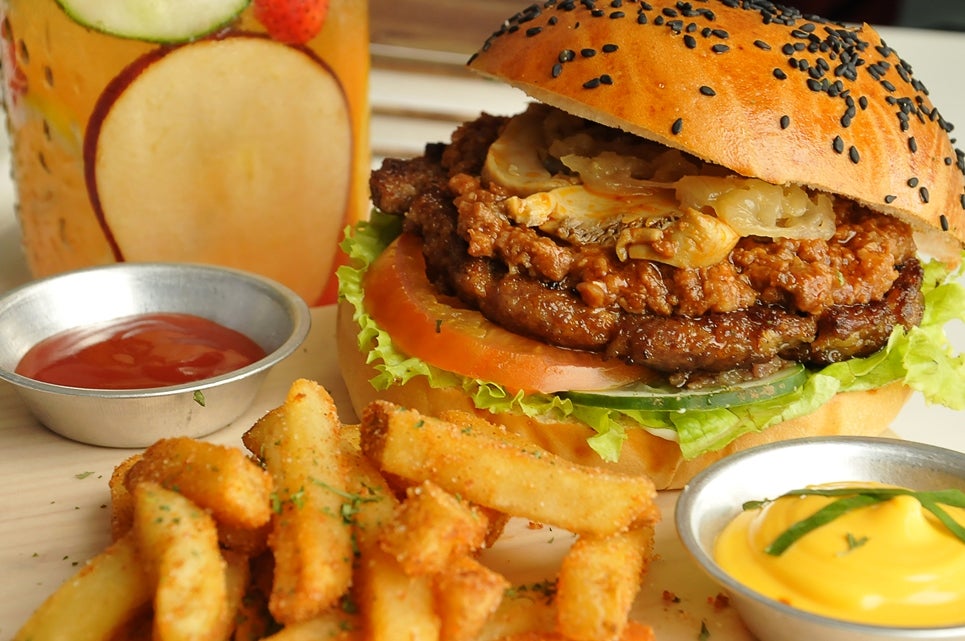 BIG BIRD Burger is a bestseller. It is served with french fries.

Everything ostrich you can find at The Ostrich Farm.

Entering the restaurant, you’ll notice a cute illustration of an ostrich hanging on the wall to your right, telling you that 100 grams of ostrich meat has 26.9 percent protein, only 2.8 percent fat, 83 milligrams cholesterol and 140 calories.

When you are seated, a waiter hands over a hardbound menu that puts all those numbers in context.

The illustration further makes the assurance: “100 percent good for you.”

“It is the healthiest kind of meat,” says Ostrich Farm executive Ginalyn Rivera Ancheta. That should be very obvious to the diner in his first few minutes at The Ostrich Farm at Blue Bay Walk, Pasay City.

Ostrich meat is an uncommon protein source, said Ancheta. This is why Kristine Lim—with newlyweds Yan Asuncion and Yeng Constantino— put up the restaurant.

The Ostrich Farm cooks ostrich meat sourced from Mindanao. The ostriches eat only organic feeds and are grown for nine months.

With a carefully curated listing of food choices, the resto offers a healthy alternative integrated into food loved by Filipinos, such as burgers, sandwiches and pasta. Ostrich meat also appears as fixing for appetizers like nacho, even salad.

Try the ostrich burgers, which are on a buy-one, take-one promo Monday to Thursday, 10 a.m.-6 p.m.

“People do not hesitate to try because the food is not high-end,” says Ancheta. “It is the usual menu with a twist.”

Another good thing about the food joint is that, while it makes known that ostrich meat is the star, it also gives you options, explains Ancheta. “If you haven’t tried ostrich meat, you can; but if you don’t want to, we have other offerings.”

This is because the rice pairs also come in beef, which is akin to the flavor of ostrich meat. The restaurant also serves chicken tocino, boneless bangus, breaded fish fillet. For appetizers, you can have cheese balls. They also offer chicken wings and tenders with bleu cheese as dip.

Flip the menu to the drinks and you’ll find floats in classic rootbeer and rootbeer caramel, aside from choco cola and strawberry. They also have shakes and hot beverages.

Try Detox Water, a mug of water with a generous amount of fruit slices and mint leaves. Their hot choco, Ancheta says, is an original recipe. Don’t miss the Desserts in a Jar.

In the coming days, the restaurant might serve up omelettes and sunny-side-ups from the gigantic ostrich eggs, and maybe in new locations, says Ancheta.